Franz SEIWALD was born in Hopfgarten (in the Kitzbühel district of Tirol) on October 12, 1897. He was a Catholic unskilled laborer, but sometimes also a commercial canvasser and white collar worker. On the side he was a »graphologist«, a handwriting analyst. With some interruptions he lived in Salzburg from 1927 on and he married here. His wife Käthe had been born in Golling, about 10 miles south of the city of Salzburg, but she had her permanent residence in Salzburg’s Lehen neighborhood — at 7 Esshaverstraße where her husband was also registered even though he often worked elsewhere.

He was in Vienna when he was arrested by the Gestapo for »offenses against the treachery act« (a law prohibiting insidious attacks on the state and party). He was deported to the Dachau concentration camp, where he was registered on March 28, 1942 as »protective custody prisoner« Nr. 29664 with the red triangle indicating that he was a political prisoner.

Three and a half months later the 44 year old Franz SEIWALD was deemed unable to work (either because he was severely ill or because of injuries suffered from the SS guards) and was one of the 83 Dachau prisoners shipped off on August 12, 1942 in a so-called »invalid transport« or »special treatment 14f13«1 to the Hartheim killing center near Linz — where they were all gassed on that day or the next.

His death was not recorded in the Salzburg police registration files. His wife Käthe left Salzburg and nothing further is known about her.

1 »Special treatment 14f13«: The »14« = Concentration Camp Inspector, the »f« = Death, »13« = Gassing in a killing center of the »T-4« organization [1st set up to kill those incurably physically or mentally handicapped and named after the address of its Berlin HQ at Tiergartenstrasse 4] 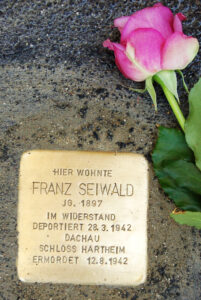 All stumbling stones at Esshaverstraße 7