Jan BLACH was born in the village of Dziesnik, (in south-central Poland near the town of Wielun) on January 6, 1875. He was a widowed Catholic farm worker, one of more than 6,000 »foreign workers« (aka slave laborers) employed in Salzburg under the Nazi regime. Only some of their data was recorded in the police registration files, but they do enable us to identify some of them.

Jan BLACH was initially assigned to the labor camp Plain that was set up near Salzburg after the conquest of Poland at the beginning of the Second World War. But the 69 year old Pole had worked for the horse dealer Josef Noisternigg in Maxglan since September 4, 1944 and was registered there officially. If he hadn’t been, we wouldn’t even know about his existence. We do know that Jan BLACH died in the State Hospital from severe injuries (pelvic contusions, fractured upper arm, & etc.) on September 29, 1944. The cause of death, accident or crime, was irrelevant in the case of a slave laborer and there was, as usual, no police investigation. 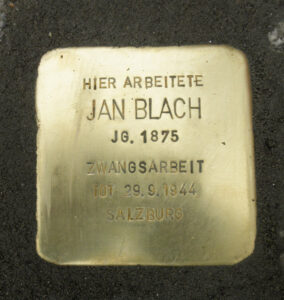 All stumbling stones at Innsbrucker Bundesstraße 57