Margarethe ASCHENBRENNER was born in Salzburg on October 1, 1887 and was the second of the three children of the Catholic couple Margarethe and Rudolf ASCHENBRENNER. Margarethe’s mother died in 1892 and her father, who was a municipal civil servant and tax bailiff, married again. The family had local citizenship rights in Salzburg and lived at 4 Rupertgasse.

Margarethe never married or learned a trade, and she worked as a servant until she was declared legally incompetent in February 1926. She was committed to the St. Josef Refuge at first, then to the Schloss Schernberg sanatorium, and finally she was admitted to the Salzburg State Asylum in June 1929. Margarethe ASCHENBRENNER was one of the 85 patients deported from there to the Hartheim Castle killing center near Linz on May 21, 1941 — where they were all murdered. As with all the other victims of the Nazis’ secret »T4«1 program, the 53 year old Margarethe ASCHENBRENNER’s death was not recorded in the Salzburg police registration files.

Her father died in Salzburg at age 84 in March 1945 and his younger son, her brother Franz, was a well known bookseller in Salzburg. 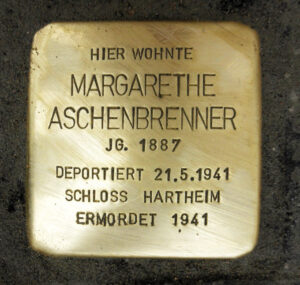 All stumbling stones at Rupertgasse 4