Christine NEUHAUSER was born in Freilassing (just across the German border from Salzburg) on July 9, 1894 and was the youngest of the four children of the Catholic couple Anna and Johann NEUHAUSER.

Johann was a waiter and then an innkeeper. The family had local citizenship rights in the community of Obertrum in the province of Salzburg where Johann had come from, but they lived in the Bavarian border town of Freilassing. All four children were still minors when both of their parents died.

Christine NEUHAUSER remained unmarried and worked in hotels around Berchtesgaden in Bavaria. In November 1937 she settled in the city of Salzburg and lived in the »singles residence« on the Weiserstraße (which is now the Merianstraße). On March 17, 1938, a week after Austria was taken over by Nazi Germany, she was admitted to the Salzburg State Asylum.

She was one of 85 patients who were deported from there to the Hartheim Castle killing center near Linz on May 21, 1941 – where they were all murdered. As with all the other victims of the Nazis’ secret »T4«1 program, the death of the 46 year old Christine NEUHAUSER was not recorded in the Salzburg police registration files.

Christine’s older sister Maria also lived in Salzburg and was the wife of the railroader August GRUBER who was executed for his resistance activities. She died in Salzburg at age 85. 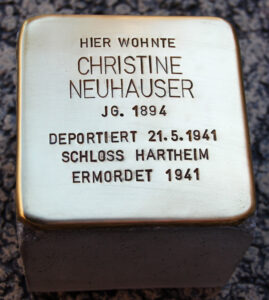 All stumbling stones at Merianstraße 40