Julius LEVI was born in Munich on March 8, 1878. He was the older of the two sons of war of a Jewish couple, Klara Levi née Thalheimer and Albert Levi, both of whom came from Aufhausen in the Bopfingen district of the then Kingdom of Württemberg (it is now in the German State of Baden-Württemberg). The Levis were one of the few German-Jewish families who settled in the Austrian city of Salzburg since the 1880s who maintained their German citizenship. Most of this group of related families in Salzburg bore the names Baer, Bernheim, Dreifuß, Einstein, Jacoby, Leiter, Levi, Neuburger, Oppenheimer, Ottenheimer and Thalheimer.

Among the best known companies during the Austro-Hungarian Monarchy were the Salzburg branch of the Munich silk and velvet business Neuburger & Einstein that opened on the Waagplatz in 1890, and the wholesale business Albert Levi opened on the Residenzplatz in 1884 [it was moved later to the Sigmund-Haffner-Gasse and finally the Rainerstraße. Albert Levi also owned the building at 11 Markus-Sittikus-Straße. He died in Salzburg on March 20, 1913 and was buried in Salzburg’s Jewish cemetery. Albert Levi’s national reputation was demonstrated by the death notice his family published in Austria’s premier liberal newspaper, the Neuen Freien Presse, on March 22, 1913 – one of the few notices ever published there about any of Salzburg Jews.

In 1909 Julius LEVI married Marianne Schalek (who was also Jewish) in Prague. On September 14, 1914 the couple produced a son in Salzburg and named him after his recently deceased grandfather Albert Levi. Albert’s younger son Fritz Isidor was born in Munich on March 14, 1881 and later married a British woman named Ethel Marion Arnold – this couple travelled widely and had no children. As neither of the two brothers Julius and Fritz had any interest in taking over the family business it was taken in hand by Adolf JACOBY, a relative from Aufhausen. The names of all the Jews in Salzburg, including those of the widow Klara Levi and her sons Julius and Fritz were widely known in Antisemitic Salzburg because they were published repeatedly in the »Jewish Register« of the United Antisemitic League’s newspaper The Iron Broom [it had been founded in Vienna in 1919, but soon moved to Salzburg where it had more support]. The »Jewish Register« was designed to promote a boycott of all Jewish businesses and force the Jews to leave the country, by the late 1920s the paper was run by members of the Nazi party.

It is worth noting that while most of the members of this extended German-Jewish family in Salzburg retained their German citizenship, Julius LEVI and his wife and son took both local citizenship in Salzburg and Austrian citizenship in 1924. In 1917 Julius LEVI became the owner of the house at 29 Plainstraße in Salzburg’s upscale Elisabethvorstadt neighborhood. In the early 1930s his marriage failed and he and Marianne got divorced in Vienna. Marianne Levi then took their 15 year old son Albert with her and moved to join her relatives in Prague. Julius LEVI’s mother Klara died in Salzburg in May 1933 and was buried alongside her husband in Salzburg’s Jewish cemetery.
Julius’ brother Fritz Levi and his wife Ethel continued to live for some time in Salzburg and the nearby rural district of Lamprechtshausen (about 25 km north of Salzburg). When the Nazis took over Salzburg in 1938 the couple fled to England. Fritz Levi died in Nottingham on December 23, 1958. Many of the other remaining German-Jewish families in Salzburg also fled: Adolfine and Max Dreifuß, Adolf, Helene and Ernst Jacoby, Mathilde, Leopold, Ludwig and Max Ottenheimer. With the exception of Adolf JACOBY (who fled to the Hague in the Netherlands where his son Hans lived) they all fled to Argentina. The 83 year old Adolf JACOBY died in the Hague of natural causes on January 2, 1943.

Julius LEVI had sold his house in Salzburg after his divorce but he either continued to live there for a while or lived with his brother in Salzburg. His last Austrian residence was in Vienna’s 9th district at 8 Seegasse: on January 11, 1942 the police register recorded him as »signed out to Riga«. On April 24, 1956 the Vienna State Court for Civil Law issued an official declaration of death that simple stated that he had not survived the German surrender date of May 8, 1945.

The Shoah-Databank spells his family name as »LEWI«. When he was deported to Riga along with about 1,000 other Jews in the second Vienna transport from the Aspang railway station on January 11, 1942 the 63 year old Julius LEVI was listed as number 414. On January 15th they arrived in Riga, the German occupied capital of Lithuania and the headquarters of the »Reichskommissariats Ostland«. Four thousand two hundred Austrian Jews were murdered in the Riga ghetto and the nearby Salaspils concentration camp and Bikernieki forest – including the Salzburgers Berta, Paula and Leah EISENBERG; Natalie ROSENTHAL; and Julius LEVI.

Julius LEVI and his son Albert were both included in the registration book for those with local citizenship rights in Salzburg. That record indicates that Julius’ son Albert survived the Shoah, presumably by hiding under a false identity as he had his name changed officially in Vienna after the Liberation – after which he emigrated to England. The gravestones of his grandparents Albert and Clara Levi can be seen in the Salzburg Jewish cemetery along with that of his great-grandmother Ernestine Thalheimer. 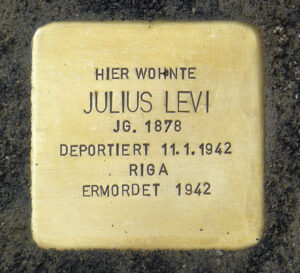 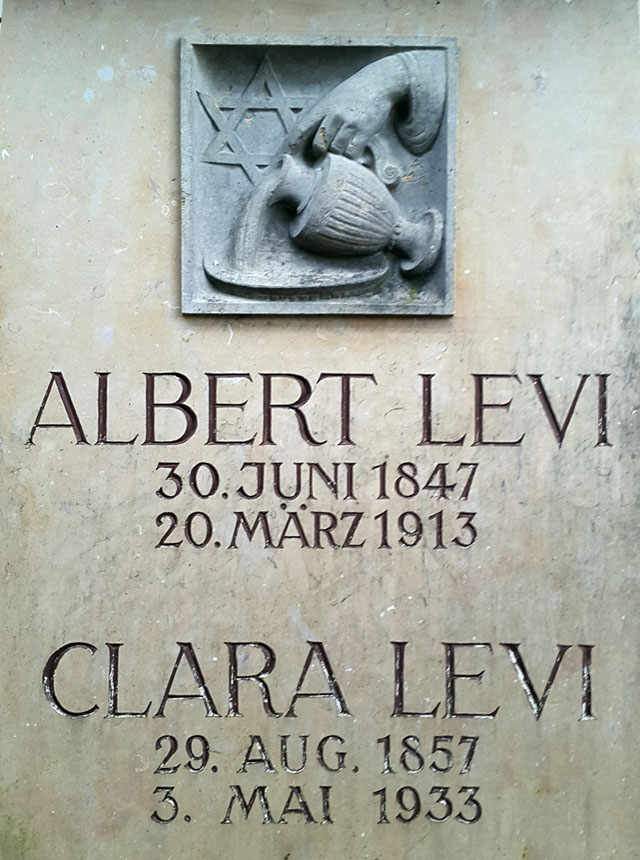 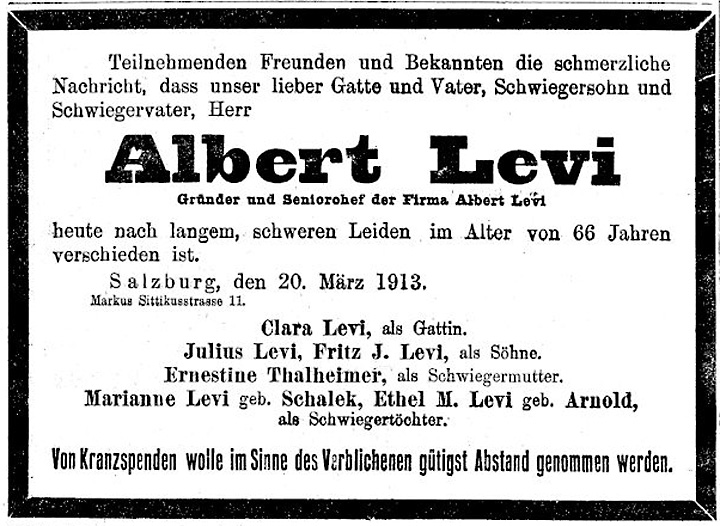 All stumbling stones at Plainstraße 29