Amalie LÖWY, née FUCHS, was born on March 7, 1875 in Buttenwiesen Bavaria. She was the daughter of Ludwig FUCHS and Julia SCHÖNBRUNN FUCHS. After the early death of her husband Ludwig FUCHS, Julia lived in Salzburg with her children Amalie LÖWY, Jenny NALOS and Isidor FUCHS until her own death in 1929. Like her father Elias SCHÖNBRUNN, who had lived at 5 Hubert Sattler-Gasse in Salzburg until his death, Julia FUCHS was buried in the Jewish cemetery in Salzburg-Aigen.

Amalie lived in Salzburg from 1895 on and was the widow of Oswald LÖWY, a Jewish shopkeeper who had been born in Netluk Bohemia (then Austria-Hungary, now the Czech Republic) in 1868. Oswald’s relatives in Salzburg included Rudolf LÖWY, the long term president of Salzburg’s Jewish community, who had also been born in Netluk (in 1856) and who had a coal and fuel business at 5 Hubert Sattler-Gasse in Salzburg — where Amalie’s grandfather also lived. Elsa, the first-born child of Amalie und Oswald LÖWY, died shortly after her birth in Salzburg in 1895. The couple had five other children, all born in Salzburg: Ludwig, Robert, Paul, Emil and Grete. Registered in Salzburg under the Austrian Heimatrecht (citizenship) laws, the family lived in the upper middle class Andrä neighborhood at 12 Franz Josef-Straße, 2nd floor — in a building that had belonged since 1929 to Amalie’s sister: Jenny NALOS, née FUCHS, who had moved with her family to Prague in 1929.

Amalie’s husband Oswald LÖWY, had been a shopkeeper in Salzburg since 1894 with a shop at 6 Mirabellplatz. He had been a member of the executive committee of the Jewish community and had died in a Vienna sanatorium on January 15, 1935. His body was brought back to Salzburg (according to the Jewish community of Vienna), but his headstone, like that of his daughter Elsa, was stolen from the Jewish cemetery in Salzburg-Aigen during the time when the Nazis ruled Salzburg.

In June 1938, the 63-year-old widow, who had lived in Salzburg for 44 years, was forced to move out of her apartment — which was »aryanized« and turned over to a local doctor. Amalie fled to Prague where her sister Jenny and daughter Grete lived. Her safe refuge was shortlived and after the German occupation of Czechoslovakia she was deported to the Terezín concentration camp on February 8, 1942. On April 28 she was transported to Zamosc in Poland and presumably murdered in the Lublin-Majdanek killing center.

Amalie’s sister Jenny was murdered in Auschwitz, along with her husband Rudolf NALOS and her son Louis NALOS. Amalie LÖWY’s daughter Grete ALLINA was able to flee before she could be deported, but her husband Ernst ALLINA was murdered in Lodz along with their daughter Helga ALLINA. Amalie’s son Ludwig LÖWY lived in Salzburg until 1938, but he was very ill and died in Vienna on January 30, 1939 (his grave in the Jewish section of the Vienna Central Cemetery).

Amalie’s brother Isidor FUCHS was able to escape with his family to Portland Oregon in the US. Four of Amalie LÖWY’s children were also able to escape to the Americas: Robert and Paul to the U.S. (Portland Oregon and Wenatchee Washington respectively), Emil and Grete to Columbia (Barranquilla).

Amalie’s son Emil LÖWY was a chemist who worked for the tire manufacturer Semperit in Traiskirchen (Lower Austria) until 1938. When he got to Barranquilla he founded a firm called Sempertex and led it until his death in 1980. Emil’s son Kenneth came to Salzburg with his family in the summer of 2011 and was by chance encountered by this researcher in front of his grandparents’ former home at 12 Franz Josef-Straße. 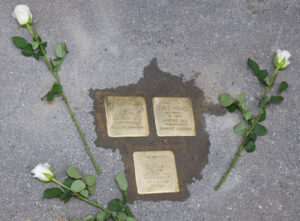 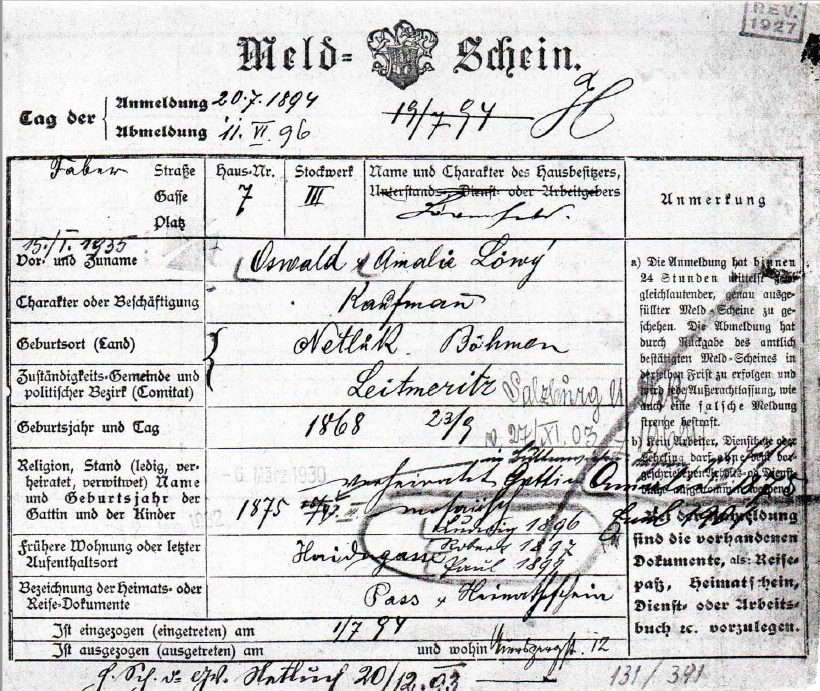 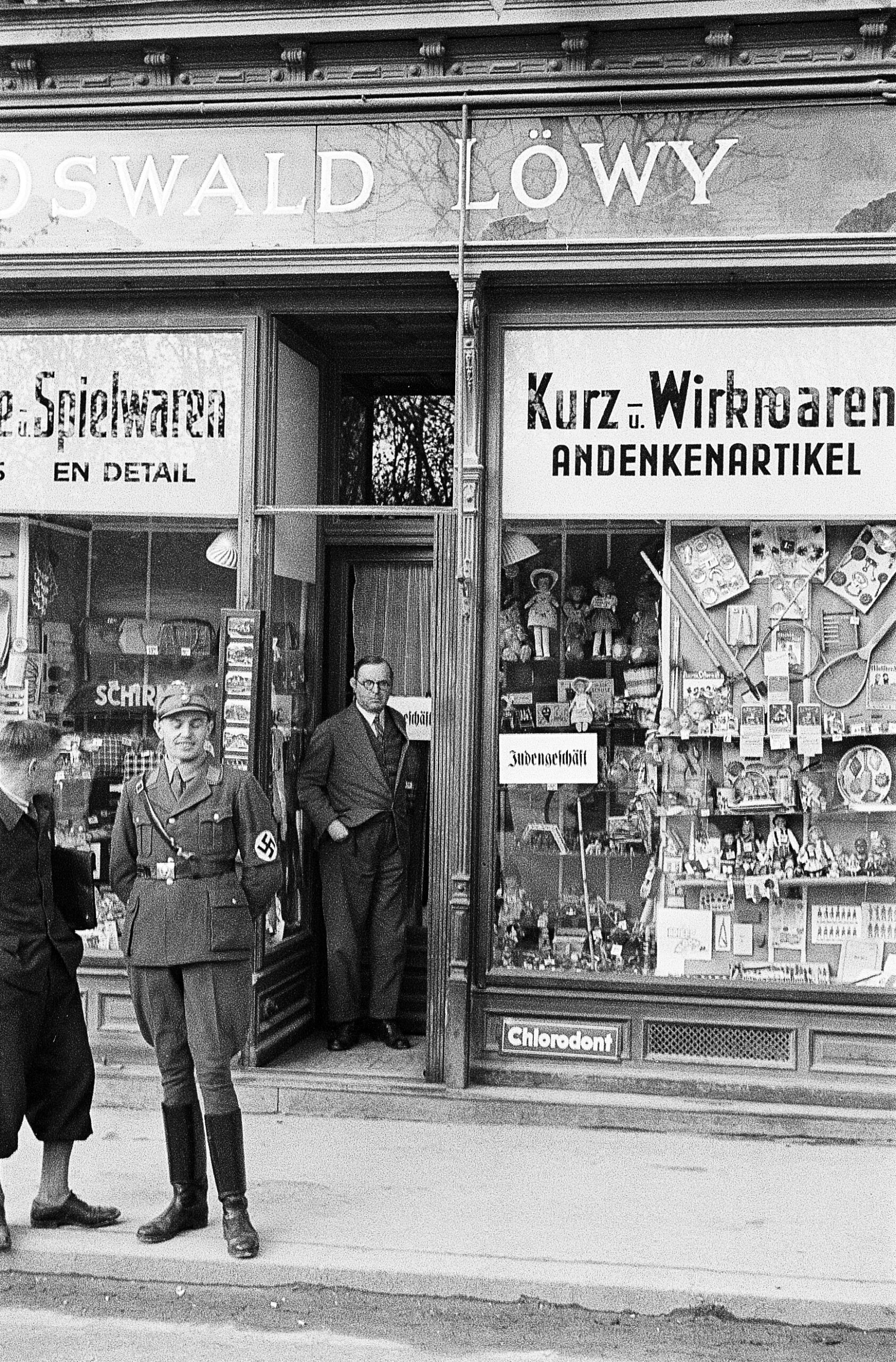 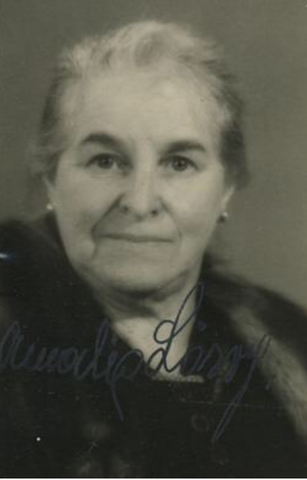 All stumbling stones at Franz-Josef-Straße 12