Rosalia (Rosa) Witzmann was born in Gnigl (which became part of the city of Salzburg in 1935) on July 31, 1884. She was the youngest child of a Roman Catholic couple named Franziska and Mathias Witzmann. Mathias was a mason by trade and both parents died early.

Rosa’s older brother Josef Witzmann was a painter and plasterer and lived with his family on the third floor of 8 Pfeifergasse in Salzburg. At times his sister Rosa was also registered here as an unmarried servant, but not consistently the registration records show that she often changed her workplace and also spent time in asylums and nursing homes.

Fifty-six year old Rosa Witzmann had been a patient at the Salzburg State Asylum since August 1933 when she was deported on May 21, 1941 to the Hartheim killing center near Linz where she was murdered.

As with all the other victims of the secret Nazi »T4«1 program to kill incurable and severely handicapped Germans her death was not recorded in the Salzburg police registration files.

Her brother Josef died in Salzburg in 1976. 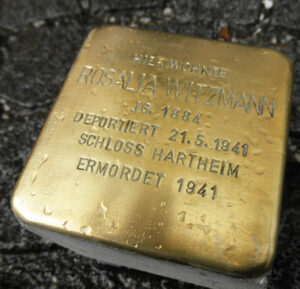 All stumbling stones at Pfeifergasse 8