Johann Kampfer was born in Pontafel, Kanaltal (which became part of Pontebba in the province of Udine Italy after WWI) on November 23, 1889. He was an unmarried Catholic unskilled worker who chose to stay in Austria after the war.

He was an Austrian citizen and had local citizenship rights in the city of Salzburg.

On April 10, 1931 Johann Kampfer was admitted as a patient in the Salzburg State Asylum. On May 21 1941 he was one of the 85 patients from the asylum who were deported to the Hartheim killing center near Linz where they were all murdered.

As with all the other victims of the Nazi’s secret »T4«1 program to murder the handicapped, the death of this 51 year old man was not recorded in the Salzburg city police registration files.

His sister, Angela Kampfer is known to have died in Salzburg in 1980.

1 »T4«: It was called this because its main headquarters in Berlin were located at Tiergartenstraße 4 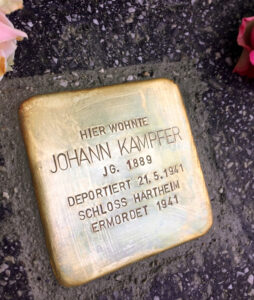 All stumbling stones at Schallmooser Hauptstraße 12