Stefanie MARESCH was born in Mühlau (near Innsbruck in the Austrian Tyrol) on December 21, 1885 and was the younger daughter of the Catholic couple Rosa and Jakob MARESCH.

Over the course of his career Jakob MARESCH was active as a forestry inspector and teacher in several parts of the Austro-Hungarian Monarchy, but after the end of WWI the MARESCH family lived in Maxglan (which became part of the city of Salzburg in 1935). Both parents died in the early 1930s.

Stefanie MARESCH remained unmarried and was a post office employee – in rural districts at first, but in Maxglan starting in 1932. Starting in 1933 she began having psychological problems and she was an inpatient at the Salzburg State Asylum on several occasions. She was one of the 68 patients who were deported from there to the Hartheim Castle killing center near Linz on April 16, 1941 – where they were all murdered.

As with all the other victims of the Nazis’ secret »T4«1 program, the death of the 55 year old Stefanie MARESCH was not recorded in the Salzburg police registration files.

Stefanie’s sister Olga was a teacher who survived the terror years and died in Salzburg at age 80. 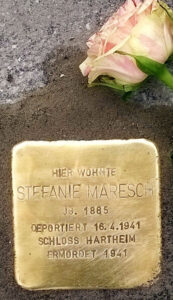 All stumbling stones at Maxglaner Hauptstraße 26