Lieutenant Colonel Ludwig KIESLER and his wife Klara, who had married in the garrison town of Troppau (in Austro-Hungarian Silesia) in 1902, had their first Salzburg residence at the hotel Zum Goldnen Schiff near the St. Michaels Church on the Residenzplatz. Both of them had been registered there since July 1915. Ludwig KIESLER was awarded a Cross for Military-Merit medal and in the First World War he served in the 40th Galician Regiment. He ended his career as a Lieutenant Colonel and was never promoted to Colonel or given a regimental command, perhaps because he was Jewish. His cousin Dr. Alfred Marill, a Viennese attorney who fled to the US in 1938, recalled:

My cousin Ludwig Kiesler, an officer who had won many awards, was denied a place with the Gerneral Staff only because he refused to convert to Roman Catholicism.

After the First World War retired Lieutenant Colonel Ludwig KIESLER and his wife Klara moved into the house at 20 Kaigasse, which was called the Nicolaistöckl. It is notable that at that time the couple was not required to state their religion in their registration, the place for religion in the registration form was left blank. There were few Jews who escaped the hostility of the Austrian League of Antisemites founded in 1919. In any case the name KIESLER never appeared in the »Jew Census« lists of people and businesses to be boycotted and expelled that were published in the Antisemites’ newspaper the Eisernen Besen (the Iron Broom) – which was published in Salzburg from 1923 on.

By the mid-1930s at the latest the religious affiliation of the KIESLERs was apparently known in Salzburg as was noted in the police registration files: both registration cards had »israelit« (Jewish) added to the cards based on official records – and in brackets next to that notation Nazi regime officials had added in accordance with the Nuremberg Racial Laws »full Jew«.

Ludwig KIESLER had been born in Kolomea, Galicia in Austria-Hungary [now Kolomyya in Ukraine] on. June 13, 1865. His wife Klara (née Baron) had been born in Lemberg, Galicia [now Lviv in Ukraine] on January 6, 1879.1 They had lived in Salzburg for a quarter of a century when they were forced to flee to Vienna and abandon their apartment on the 2nd floor of 20 Kaigasse on December 14, 1939. The Salzburg Gestapo officer Josef Schneidinger was given their apartment.

The KIESLERs lived at 6/8 Köllnerhofgasse in Vienna’s 1st District until August 13, 1942, when they were deported to the Theresienstadt concentration camp in »Transport 35, Train 501«. The 77 year old Ludwig KIESLER was murdered there on January 28, 1943. On December 18, 1943 his 63 year old widow Klara KIESLER was sent from Theresienstadt to Auschwitz in »Transport Ds« along with another expelled officers’s widow from Salzburg Helene Fröhlich. She was murdered in Auschwitz. 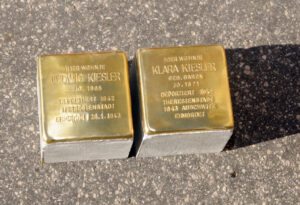 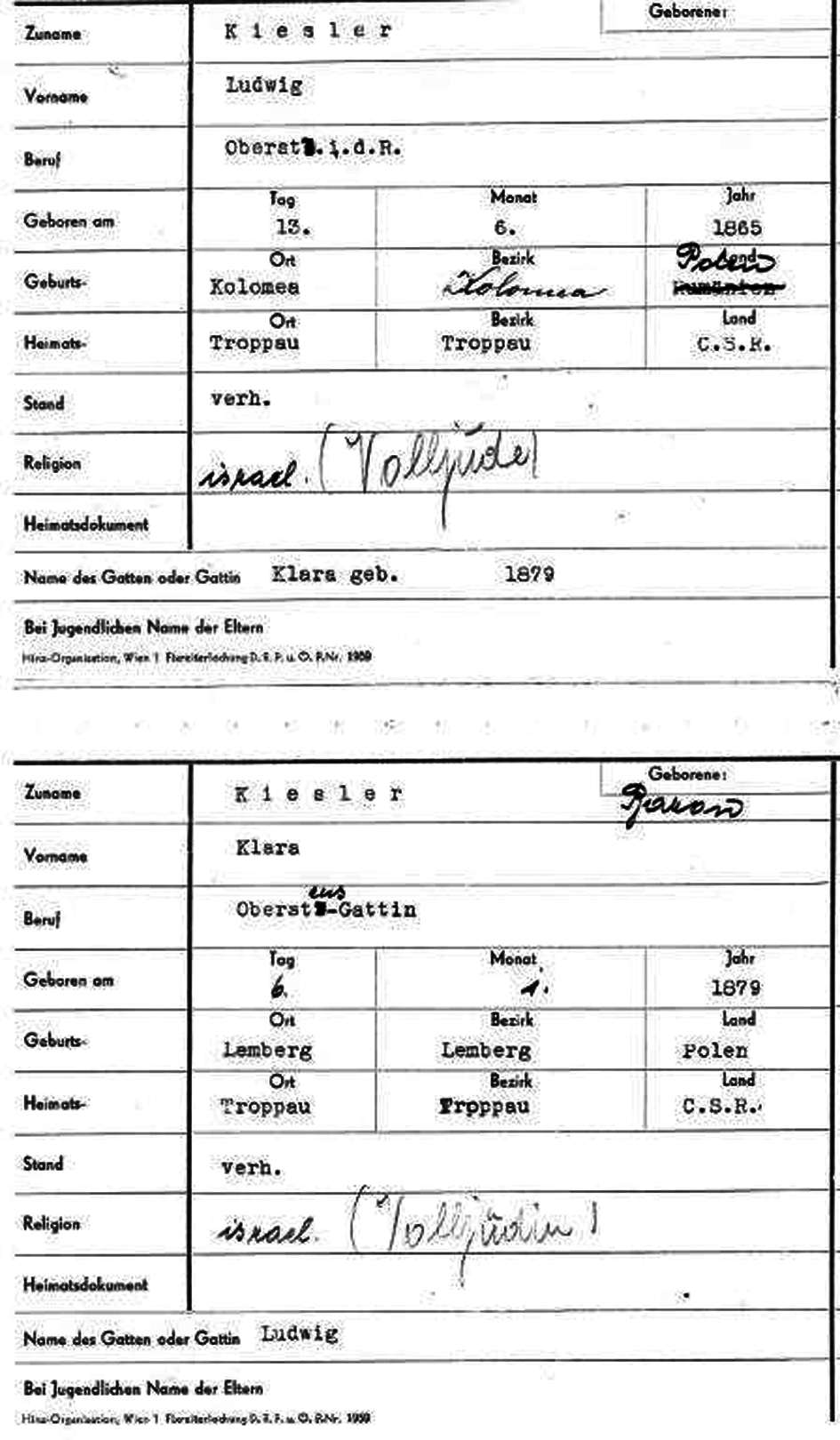 All stumbling stones at Kaigasse 20