Herbert GRAF, was born in the Austro-Hungarian capital and Imperial Residence Vienna on April 10, 1903. He was the older of the two children of a Jewish couple, Max Graf PhD and Olga Graf neé Hönig.

Herbert’s father was a well-known musicologist and critic, but he was also a member of the »Wednesday Psychological Society« organized by Sigmund Freud – which is now known as the Vienna Psychoanalytic Society and is the oldest psychoanalysis society in the world.

Herbert GRAF studied singing, piano and stage design as well as musicology. In 1925, under the supervision of Guido Adler he gained a doctoral degree based on his study of Richard Wagner as a director. He married the Jewish Liselotte Austerlitz in 1927 and their son Werner Lothar was born in Pilsen (now in the Czech Republic and called Plzeň) in May 1933.

From 1925 to the beginning of 1933 Herbert GRAF worked as an opera director in the German cities of Münster, Breslau and Frankfurt am Main. In 1929 he was hired as chief director at the Frankfurt opera house under artistic director Josef Turnau and orchestra leador Wilhelm Steinberg.

Noteworthy are GRAF’s daring productions of contemporary operas such as Maschinist Hopkins by Max Brand, Rise and Fall of the City Mahagonny by Kurt Weill (with a libretto by Bertolt Brecht) and Von heute auf morgen [From today to tomorrow] by Arnold Schönberg (with a libretto by his wife Gertrud presented under the pseudonym Max Blonda).

The opera by the Schönbergs, which premiered on February 1, 1930, was the first to be performed in twelve-tone technique and was not a great public success to say the least. The composer present is said to have accepted the expressions of displeasure with serenity:

[…] When Schönberg appeared at the end, there was probably a lot of applause, but there was also loud opposition expressed in whistles and shouts, which did not seem to disturb the composer in the least.
Neues Wiener Journal, February 6, 1930, p. 10

Immediately after Adolf Hitler came to power in 1933 the artistic director Josef Turnau, the orchestra leader Wilhelm Steinberg and the opera director Herbert GRAF were all expelled from Germany as »cultural Bolsheviks« because of their Jewish origins and alleged »disruptive activity«.

Prag (Prague), Basel, Philadelphia, Florence and Salzburg were the next work places of the Austrian opera director Herbert GRAF. It is often said that he went into exile in America as early as 1934, but it is more accurate to say that he was engaged for just one season by the Philadelphia Opera company for its German-language repertoire – where among other things he staged the opera Der Rosenkavalier.

In the Spring of 1935 Herbert GRAF was back in Europe, to participate in the Florentine May Festival and Salzburg Festival under the musical direction of Bruno WALTER.

Mozart’s The Abduction from the Seraglio, newly staged by Bruno WALTER and Herbert GRAF with a set designed by Oskar Strnad, had its premiere in the Festival House on August 12, 1935. The Viennese music critic Fritz Deutsch praised Herbert Graf’s directing highly:

… This time the scene is directed by the young Herbert Graf who is equally valued in America as he is in Germany, Switzerland and Italy, a Viennese who, based on the impression of his work in Salzburg, is one of the few really talented opera directors today. What Graf showed of Mozart’s theatricality was inspired by the sound of the music, and rooted in it in terms of movement […]
Neues Wiener Journal, August 14, 1935, p. 11

The locally patriotic Vienna music critic naturally emphasized that the Herbert GRAF, who shone in festive Salzburg, was a Vienna resident. In Vienna, however, he had no prospect of gaining a permanent positon. He only succeeded in staging Richard Wagner’s Tannhäuser as a guest director at the Vienna State Opera in autumn 1935.

Nonetheless, Herbert GRAF´s production of the Meistersinger von Nürnberg under Arturo TOSCANINI’s musical direction in the Summer Festival of 1936 attracted international attention. It premiered in the Salzburg Festival House on August 8th – a risky proposition because of the spatial limitations:

The Meistersinger miracle of the festival … What Dr. Herbert Graf in the four ‘Meistersinger’ pictures shows, moves, creates in an optical effect, is much more than a sample of great talent. It is a mature fulfillment, a faithful opera director, a work with which this young Vienna artist has put himself in the forefront of his profession. His solutions to the spatial limitations worked incredibly well in every case..
Neues Wiener Journal, August 9, 1936, p. 24

Im December 1936 Herbert GRAF began a new career at the New York Metropolitan Opera with its German language repertoire. The music city of Vienna found out about this from the newspaper:

But Herbert GRAF was back in Salzburg for a third time for the 1937 Summer Festival. This time he staged Mozart’s Magic Flute, which premiered in the Festival House on July 30 under the baton of Arturo TOSCANINI. Music critics rightly admired Herbert GRAF’s directorial work in the confined space:

… Dr. Herbert Graf, the young director who enjoys Toscanini’s special trust and who was entrusted by him with the production of ‘Meistersinger’ last year, has been at work for weeks. The splendid designs of the second act finale, a festival meadow that presented unspeakable difficulties on the spatially narrow, technically highly imperfect current stage, raised the artist’s reputation to the highest level at one stroke.
Salzburger Chronik, August 3, 1937, p. 9

Gerechtigkeit, a newspaper that Irene Harand published in Vienna under its motto »Against Racial Hatred and Poverty« was very impressed by the Salzburg Magic Flute, as, in accordance with its cosmopolitan idea, both Jews and members of different nations participated:

… as you can see, in producing high art on Austrian soil, people can get along wonderfully and inspire the whole world under the sign of international peace and Austrian tradition.
Gerechtigkeit, July 29, 1937, p. 3

As a Christian activist against Nazism and Antisemitism, Irene Harand had to leave Austria immediately when it was annexed to Germany. It is said that her books, including one called »His Struggle. An Answer to Hitler«, were burned on the Salzburg Residenzplatz on April 30, 1938. In any case, it’s certain that Irene Harand dedicated her life in exile primarily to the rescue of Austrian Jews.

Research has also revealed that Herbert GRAF’s parents Max and Olga survived the years of terror and that his widowed mother-in-law Therese Austerlitz was murdered in an unknown concentration camp.

On the other hand, Herbert GRAF’s artistic endeavors in the USA and in liberated Salzburg are well documented. His productions in the 1950s are listed in the annals of the Salzburg Festival: The Marriage of Figaro, Don Giovanni and The Magic Flute from Mozart, Elektra from Richard Strauss, Othello and Simone Boccanegra from Verdi.

It is also noteworthy that Herbert GRAF was director of the Stadttheater in Zurich in the 1960s and at the end of his career was the director of the Grand Théâtre in Geneva. 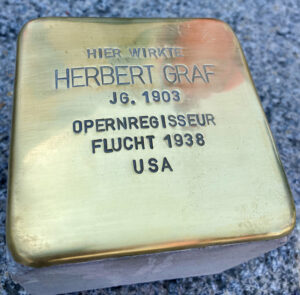 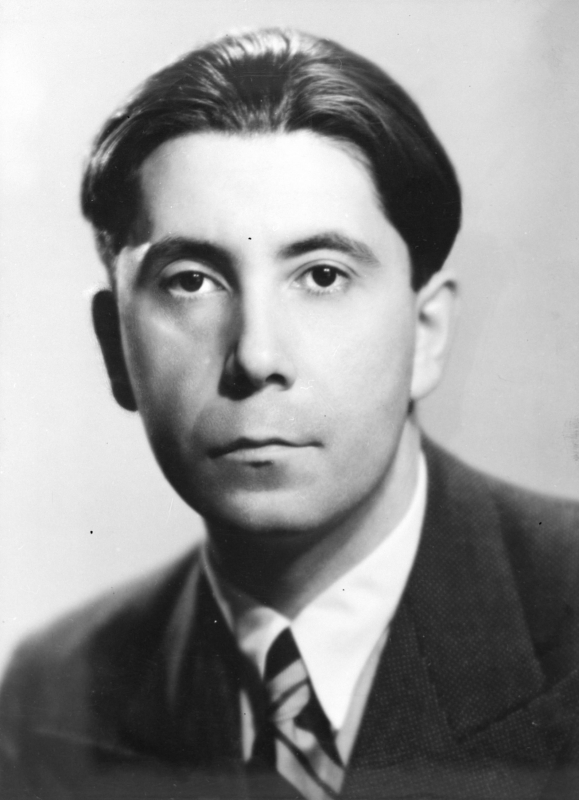