Katharina (Käthe) HUEMER was born in Gnigl [then outside, but now part of the city of Salzburg] in 1905.

She was a Catholic milliner and saleswoman. She was first admitted to the Salzburg Provincial Sanitarium in 1928. On April 18, 1941 she was sent from there to the extermination center at Schloss Hartheim near Linz in Upper Austria where she was murdered. 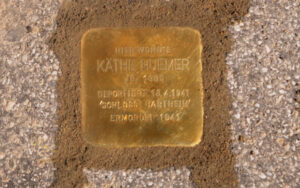 All stumbling stones at Schallmooser Hauptstraße 29