Josef GRON was born in Ried (in the Inn district of Upper Austria) on August 6, 1899. He was the only child of the Catholic couple Theresia and Johann GRON, a cabinet maker.
At the beginning of the 20th century the family moved to Salzburg and had local citizenship rights here.

Josef trained as a waiter and he lived with his mother in Salzburg after his parents separated. After the beginning of the 1920s he worked in Turin Italy and he married an Italian woman there and had two children with her: Walter, born on June 10, 1926, and Margherita, born on October 11, 1931.

Although they lived in Turin, they maintained local citizenship rights and legal residence in Salzburg. Josef’s mother Theresia was separated from her husband and worked as a seamstress in Salzburg until her death at 59 in August 1937.
Perhaps because of her illness her son Josef had been living in Salzburg since July 1936, without his wife and children. Here he again worked as a waiter and lived last at 21 Bergstraße (in the neighborhood known as the Old City Right Bank). In the police register his deregistration date is given as May 20, 1938 – presumably the day Josef GRON was arrested by the Gestapo. In any case he was kept for a while as a Gestapo prisoner in the police jail on the Rudolfsplatz.

The 38 year old Josef GRON was one of the 12 Salzburg prisoners deported to Dachau on June 17, 1938. On arrival in the concentration camp they were registered as »PSV«-, »AZR«- or »Protective custody prisoners« – marked as political prisoners who had to wear red triangles on their uniforms. Josef GRON was prisoner number 16390. It is worth noting that until now most of the Salzburg prisoners sent to Dachau in 1938 have remained unknown because their names don’t appear in the 1991 book Dokumentation Widerstand und Verfolgung in Salzburg 1934-1945. The latest research shows that more than half of these concentration camp prisoners, including seven of the twelve who arrived in Dachau on June 17, 1938, didn’t survive.
The lack of police and judicial files make it impossible to say what the actual grounds were for their persecution by the Nazi regime.

Josef GRON, »Protective prisoner« Nr. 16390, ws transferred from Dachau to the Flossenbürg concentration camp on September 27, 1939 and registered there as Nr. 715. On March 2, 1940 he was sent back to Dachau. The 42 year old prisoner Josef GRON was presumably severely ill or injured. In any case he was unable to work and was one of the 100 concentration camp prisoners who were deported from there on January 22, 1942 in a so-called »Invalid transport« or »Special treatment 14f13«.1
They were sent from Dachau to the killing center in Hartheim near Linz and gassed on the same or following day. The Salzburg city police register lists March 17, 1942 as the official date of death reported by the Dachau concentration camp for Josef GRON.

At the request of his descendents in Italy the historian Dr. Giulia La Mattina has carried out extensive research into the fate of Josef GRON who was long considered lost.
His granddaughter Silvia welcomed the laying of the Stumbling Block in Salzburg. 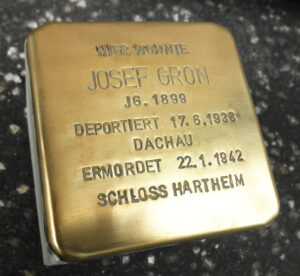 All stumbling stones at Bergstraße 21