Olga ZWEIG was born in Vienna, the Imperial Residence of the Austro-Hungarian Monarchy, on January 9, 1885. She was the fifth of the seven children of Maria and Ernst ZWEIG.

Olga’s father was Jewish, an uncle of the author Stefan ZWEIG. Olga’s mother Maria’s maiden name was Brenner and she was a baptized Catholic who had no Jewish ancestry. Because Olga’s father was Jewish and her mother was Catholic they married in the Vienna municipal offices and not in a synagogue or a church. Although their Vienna born children were officially without any religion and were registered as unaffiliated, when some of Olga’s siblings died in childhood Marie and Erwin had them buried in the Jewish section of the Vienna central cemetery.

We also know that when Olga’s sister Auguste married the Jewish Max Fellner she joined the official Jewish Community. In Austria a person’s religion was noted on all sorts of official documents and registration papers, which could have fatal consequences after the Nazis took over: Olga’s siblings Ernestine, Julie and Maximilian were counted as »1st degree Jewish Mixed Breeds« but survived the Nazi’s racist terror. Their sister Auguste was identified as a Jew and was murdered in the Theresienstadt concentration camp.

Olga ZWEIG remained unmarried and lived in Salzburg from January 1931 on, where she worked as a nurse. She didn’t have an innocuous name that was shared with lots of »Aryans«, instead she shared the family name of her famous cousin who also lived in Salzburg, Stefan ZWEIG. To avoid the likely hostility of local Antisemites the 46 year old woman claimed to be a »Catholic« when she registered at the Salzburg municipal offices: an act that officially replaced her previous registration as »without religion«.

This was a routine matter for the registration office in 1931 and had no consequences for Olga ZWEIG at the time. Usually ordinary people with famous relatives mentioned them in conversation: namedropping, but as the bearer of a prominent name associated with Jews and living in a virulently Antisemitic environment she felt compelled to do the opposite, to deny any relationship.

For that reason it is unsurprising that her name never appears in the extensive correspondence of Stefan ZWEIG and that there was no observable contact in Salzburg between the two cousins.

Olga ZWEIG was a foster mother sworn to secrecy and since her arrival in Salzburg in January 1931 she had a foster child with Cerebral Palsy named Rudi living with her. At times Rudi’s mother, who was separated from her husband, also lived with her along with Rudi’s younger sister. Rudi’s mother and sister emigrated to England before the terrible events of 1938. But his mother didn’t find safety there, at age 56 she was killed in the German bombing of London in April 1941.

Rudi’s Father, a Jew who had converted to Catholicism, fled from Vienna to Prague in 1938, but was murdered in Auschwitz. Olga ZWEIG´s foster son Rudi, who was unable to care for himself, was doubly threatened by the Nazis: as a spastic unable to work he would have been incarcerated in a nursing home and then murdered in the Hartheim killing center, and as a Jew he would have been gassed in Auschwitz like his father.

It was only thanks to the care and silence of his foster mother Olga ZWEIG that neither fate overtook him. It is notable that Olga’s silence continued after the liberation in 1945 and no officials became aware of Rudi’s origins.

Olga ZWEIG didn’t want her foster son Rudi to be exposed to the hostility that would still have been directed at him in liberated Salzburg had those origins become known.

While Stefan ZWEIG was writing his last works, The World of Yesterday and Chess Novel, and then committed suicide in his Brazilian exile on February 23, 1942, his cousin Olga was in the police jail in the »Gauhauptstadt« [the Nazi designation for a regional capital] Salzburg.

It is quite possible that the news of the suicide of the world famous author in far away Petropolis reached his cousin in her cell in the Rudolfsplatz jail given the fact that the February 25, 1942 issue of the Salzburg regional newspaper published a venomous notice:

Suicide of Stefan Zweig.
The Jewish author Stefan Zweig and his wife were found shot to death in Rio de Janeiro under conditions that an English report says indicate suicide. Thus another emigrant Jewish life has reached its typical end.

I am a relative of the author Stefan Zweig and the officials know how hated this world famous author was by the Nazis. To avoid the persecution that threatened me had this relationship and my ancestry been known I presented myself as an Aryan and that succeeded in protecting me from persecution by the National Socialists.

It is unlikely that Olga ZWEIG reported her ancestry in the »Special Census of Jews« in May 1939. A failed attempt to cover this up can be reconstructed from the »ancestry« entry in Olga ZWEIGs police registration file: at first Olga ZWEIG was recorded as »without religion«, but in February or March 1941 this was struck out and »mosaic« and »Jew« were entered on the front of the card, while the Nuremberg Racial Law designation »full Jew« was written on the back.

This indicates that the police registration office had been notified about the false registration by the Gestapo. And in accord with Nazi practice the first name of the woman now identified as a »full Jew« was changed to »Sara«, an arbitrary bureaucratic stigmatization and exercise of police power.

Those impacted by the Nuremberg Racial Laws who hid their »ancestry« or declared it falsely were in great danger from the Gestapo if they were discovered. We know, for example, that when the truth about the actress Margarethe ETLINGER, whose father was a Jew who had converted to Protestantism, was discovered, she was deported to the Ravensbrück concentration camp in November 1941 and murdered. In this context Olga ZWEIG got off lightly.

On March 11, 1941 she was arrested by the Gestapo and charged with having tampered with her birth certificate – she had inserted »Catholic«. After 14 months in police custody she was sentenced to a year in prison and on the same day, May 11, 1942, she was released as having already served he sentence. While she was in jail good and reliable friends outside Salzburg took care of her foster son Rudi.

On the (largely mistaken) assumption that religious Jews were under greater threat from the Nazis than those who were unaffiliated or who converted some Jews converted to Catholicism or identified themselves as being of no religion.

On July 4, 1942 the 57 year old Olga ZWEIG had herself baptized by Fr. Franz ZEISS in Salzburg’s St. Andrä parish church in the hope that her change of faith would protect her from further persecution.

But Olga ZWEIG was soon back in the clutches of the Gestapo and on February 14, 1945 the 60 year old Olga was deported – together with four other women and two children named Berta and Stanislaus – from the Salzburg police jail to the Theresienstadt concentration camp on »special transport« IV/15e. She was fortunate to only have to spend a short time there – she was liberated on May 8, 1945.

After a month in quarantine for typhus Olga ZWEIG was able to return to Salzburg on June 13, 1945. Rudi was there waiting for her in the expectation that she would continue to care for him, but she didn’t have the financial resources needed. To get help in seeking victims’ assistance she turned to Dr. Richard Weinberger, an attorney who had returned from exile.

He claimed the 14 month jailing of his client by the Nazi regime was political persecution – which was correct and his effort reached a successful conclusion in March 1950 when Olga ZWEIG was recognized as a victim in terms of § 1 of the victims compensation law and received an »official certificate« that entitled her to a pension.

Olga ZWEIG and her foster son Rudi (who resumed running errands) lived on the first floor of 6 Linzer Gasse until 1964.1

Rudi died in a Salzburg old age home at age 58 in 1973, seven years after the death of his foster mother – whose grave in the Salzburg municipal cemetery had already been abandoned because there was nobody prepared to maintain it – the fate of the graves of many ordinary people.

Olga ZWEIG deserves respect for her life-saving efforts, she died on February 5, 1966 at age 81.

1 The Catholic family HAMMER, who were close to St. Andrä pastors Franz ZEISS and Franz WESENAUER, lived on the 2nd floor at 6 Linzer Gasse 6. Both pastors worked to protect Catholic converts from Judaism against Nazi persecution. They searched out reliable Catholic families that would hide the converts from the Gestapo.
The HAMMER family was one of the few courageous Catholic families that offered refuge to these persecuted young people and thereby saved their lives. We also know that Frau Franziska HAMMER and Olga Zweig were close friends. It is worth noting that the 2nd floor at 6 Linzer Gasse where Frau Hammer lived with her children had served as a Jewish prayer center near the end of the 19th century.
The very small Jewish community of the time rented the apartment for the use of visiting rabbis, religion teachers, and cantors as they had no synagogue before the construction of the Lasserstrasse synagogue in 1901. 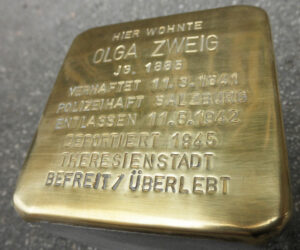 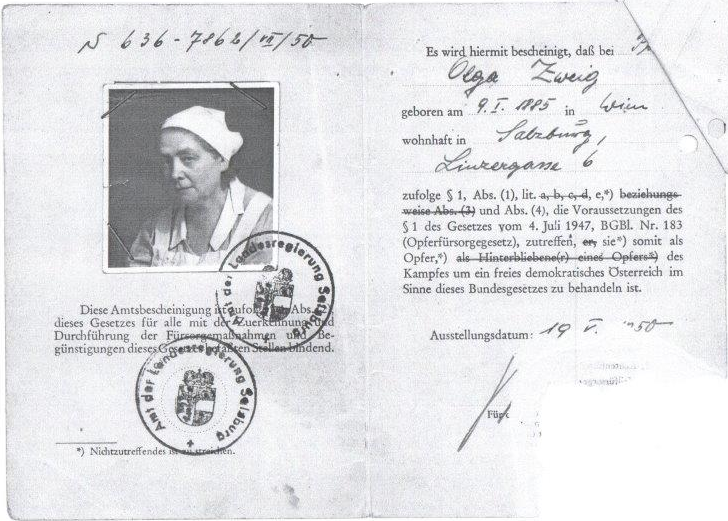 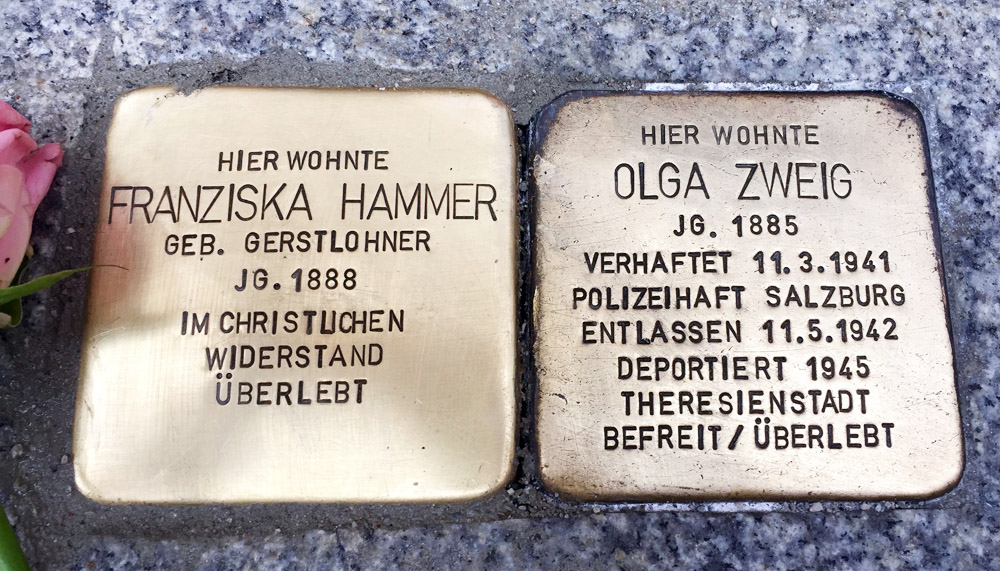 All stumbling stones at Linzer Gasse 6