Maria BRANDSTÄTTER was born in Faistenau (about 20km east of Salzburg) on June 18, 1887. She was the illegitimate daughter of a farmworker who was baptized Catholic and fostered by the Hinterstoißer family – who lived at 13 Ernest-Thun-Straße 13 and had local citizenship rights in Salzburg.

Maria BRANDSTÄTTER graduated from an Ursuline teacher training institute and became an elementary school teacher in Itzling. Female teachers were required to remain celibate so she never married.

On September 10, 1940 the 53 year old woman was admitted in the Salzburg State Asylum, which was a dangerous place to be under the Nazi regime. And just a few months later she was one of 68 patients deported from the asylum to the Hartheim Castle killing center near Linz on April 16, 1941, where they were all murdered.

As with all the other victims of the Nazis’ secret »T4«1 program, her death was not recorded in the Salzburg police registration files. 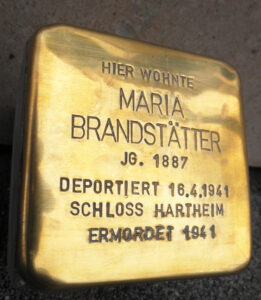 All stumbling stones at Ernest-Thun-Straße 13