Theresia KOMENDA, née Zink, was born in Munich on April 22, 1890 and was baptized Protestant. She was the wife of the musician Eduard KOMENDA from Aurisina, near Trieste on what was then the Adriatic coast of Austria Hungary (it is now Italy).

They had no children and lived in Gnigl since 1931 (four years before it was annexed to the city of Salzburg).

On May 11, 1938, under the Nazi regime, Theresia KOMENDA was committed to the Salzburg State Asylum. She was one of the 29 patients deported from there to the Hartheim Castle killing center near Linz on April 18, 1941 – where they were all murdered.

As with all the other victims of the Nazis’ secret »T4« 1 program, the death of 51 year old Theresia KOMENDA was not recorded in the Salzburg police registration files.

Her husband, who was her legal guardian, survived the terror years and died in Salzburg in 1953. 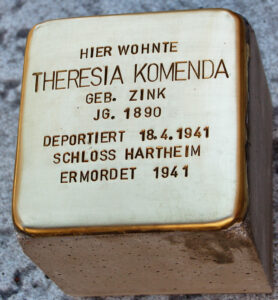 All stumbling stones at Wildenhoferstraße 10