Alfred SCHULHOF was born in Prague on June 12, 1881, the youngest of the four children of the Jewish couple Karoline and Salomon SCHULHOF (whose grave can be found in the Jewish cemetery in Prag-Straschnitz. Alfred converted to Lutheranism and moved to Innsbruck in 1909. He was married and had four sons before getting divorced. After that he moved to Salzburg and from the early 1930s on he lived in the villa at 52 Rudolfskai where he worked as an accountant and organized the RUF Accounting Corp.
His son Eduard (who had been born in Innsbruck in 1909) also lived in Salzburg. He was a married office clerk with two children and managed to survive the Nazi terror years in Salzburg. Eduard SCHULHOF received a pension as a victim of the Nuremberg Racial Laws and died in Salzburg in 1989.

The 57 year old Alfred SCHULHOF fled to Prague, the city where he had been born, but the Nazis followed him there and he was deported from Prague to the Theresienstadt concentration camp on October 24, 1942. On October 28, 1944 he was shipped from there to Auschwitz, where he was murdered. Alfred’s older siblings Marie and Rudolf were also murdered.

Another of Alfred’s sons was Siegfried, who had been born in 1908 in Neutitschein, Moravia in Austria-Hungary [it is now Nový Jičín in the Czech Republic]. On March 19, 1945 he was shot to death while fleeing from the SS in Bystřice (Benešov District) south of Prague. Alfred’s youngest son who had been born in Innsbruck in 1919 was also named Alfred. He was able to flee to Ireland in 1939. There he was able to study electrical engineering in Dublin (which is mentioned in the memoir of Nobel laureate physicist Erwin Schrödinger).

The Shoah-Databank of Yad Vashem has a memorial page from the son Alfred for his father Alfred SCHULHOF which lists Salzburg as his »permanent residence«. 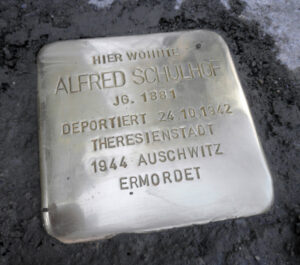 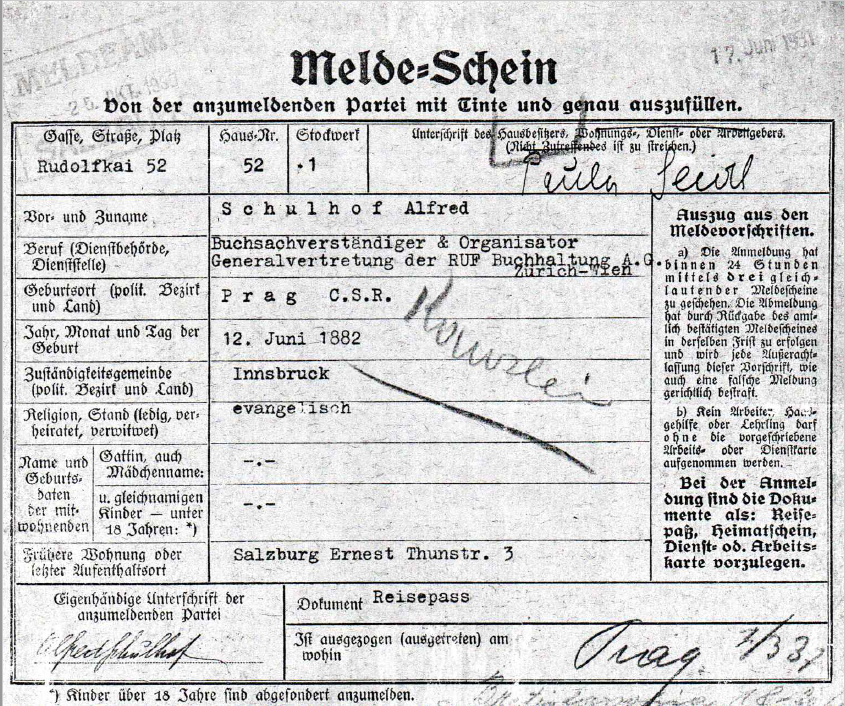 All stumbling stones at Rudolfskai 52