Franz HEITZER was born in Leopoldskron-Moos (which became part of the city of Salzburg in 1939) on April 2, 1906 and was baptized Roman Catholic. He was the first of three children of Katharina and Kaspar Heitzer who farmed the Bindergut farm in Leopoldskron-Moos.

His parents died in the 1930s and Franz became a patient in the Salzburg State Asylum in 1932, which meant he was unable to work – a fundamental consideration later for »euthanasia« killing under the rule of the Nazis.

And so, Franz HEITZER became one of the 82 patients deported from Salzburg to the Hartheim Castle killing center near Linz on April 17, 1941 where they were all murdered. As with all the other victims of the Nazis’ secret »T4«1 program the death of the 34 year old Franz HEITZER was not recorded in his police registration file.

His younger sisters all survived the terror years.

1 It was called the »T4« program because its headquarters in Berlin were located at Tiergartenstraße 4. Those mainly responsible for the murders of the handicapped from Salzburg were Reichsstatthalter [Governor] Dr. Friedrich Rainer, the director of the Regional Health Office Dr. Oskar Hausner, the director of the State Asylum (now called the Christian-Doppler-Clinic) Dr. Leo Wolfer, and the head of the asylum’s heredity disease section Dr. Heinrich Wolfer. 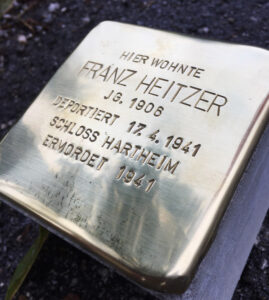 All stumbling stones at Moosstraße 112