Friedrich TISCHER was born in Salzburg on May 27, 1920 and was the only child of Anna and Anton Tischer who had been married in a Lutheran ceremony. His father was a porter, night watchman and office »boy«. The family ahd local citizenship rights in the city of Salzburg and lived on the 3rd floor of 4 Königsgässchen, a small ally going off from the Linzer Gasse.

Friedrich TISCHER was a trained cabinetmaker and was just 19 years old when WWII began, but that was old enough to be drafted. After working for the Reich Labor Service he was drafted into the German Army in 1940. Only in the fifth year of the war do we find signs of the young soldier’s life. It isn’t known if he deserted and was sentenced or if he was simply found »unfit for service« and dismissed, all we know is that in August 1944 he was registered as prisoner number 47302 in the Neuengamme concentration camp and assigned to an external work detail in Kaltenkirchen, Schleswig-Holstein. He was assigned to forced labor as part of »Special Action Army«, was dead on November 13, 1944 and was buried in the cemetery on the Kieler Straße there. The death of the 24 year old Friedrich TISCHER from Salzburg remained so unnoticed that it wasn’t even recorded in the police registration files of his home town.

At the time of his death his father had been under arrest in Salzburg for two months. It isn’t clear if there was any connection between the persecution of the father and son. The fact is that Friedrich’s father Anton Tischer was charged with »undermining the military« and on February 23, 1945 he was sentenced to two years imprisonment by a session of the Vienna Superior Court sitting in Salzburg. He was still in Salzburg when the city was liberated by US troops on May 4, 1945 and he was freed then. In liberated Austria Anton Tischer was recognized as a »victim in the struggle for a free and democratic Austria« and was eligible for victim’s compensation. He died in Salzburg at age 66, two years after his wife Anna. 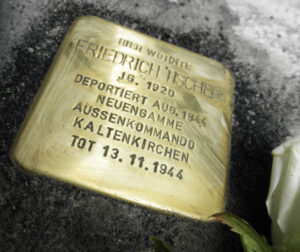 All stumbling stones at Königsgässchen 4