For about three decades a Jewish family lived in the formerly independent workers’ and railroaders’ community of Gnigl-Itzling that was annexed to the city of Salzburg in 1935. The husband was Eduard (Elias) Rosenfeld who had been born in Vienna on May 18, 1861. The wife was Amalie ROSENFELD, née ADLER, who had been born near Vienna in Baden, Lower Austria. They lived together with their daughter Flora who had been born in Itzling in 1905. At first their apartment and used goods and clothing business were on the Itzling Hauptstraße, but in the 1920s they moved them to a property they owned at 6 Wildenhoferstraße.

Eduard ROSENFELD became severely ill and died in Vienna in 1929. He was buried in the Jewish section of the Vienna Central Cemetery. The widow and her daughter had to sell the property and they moved to 17 Goldgasse in the Old Town in 1930. It was directly across from 16 Goldgasse where they ran a fashion shop together. The economic crisis and the growth of Antisemitism in Salzburg forced the mother and daughter to move again and their last residence was on the 1st floor of 6 Schallmooser Hauptstraße. They had to leave this apartment after the »Reichskristallnacht« Pogrom of November 9-10, 1938 and a Salzburg SS-man was the beneficiary of their expulsion

The registration files of Vienna indicate that the 34 year old Flora ROSENFELD was last registered at 48/3/29 Stumpergasse in the 6th district and that she signed out as leaving for England on July 31, 1939. There is no trace of her after that. Her 66 year old mother apparently failed to get a visa and stayed behind in Vienna. Her last address was at 41/8 Zirkusgasse in the 2nd district, in a »collection residence« for Jews who were scheduled for deportation.

On July 28, 1942 Amalie ROSENFELD was deported from Vienna to the Theresienstadt concentration camp on »Transport 34«, along with Anna POLLAK who had also been expelled from Vienna. On September 21, 1942 she was shipped out on “Transport Bp” together with Anna POLLAK, Anna STUCHLY and Therese SPIEGEL — all women between 68 and 70 years old from Salzburg. They were murdered after the transport arrived at to the Treblinka death camp.1

1 Adolf Eichmann received a coded radiogram from SS-Sturmbannführer (Major) Hermann Höfle on January 11, 1943 reporting that by the end of 1942 1,274,166 Jews had been murdered at the Lublin-Majdanek, Sobibor, Belzec and Treblinka death camps. The radiogram was decoded at the time by the British Secret Service but it was only released to the public in 2000. That brought the role of the Salzburger Hermann Höfle back into view (Peter Witte, Stephen Tyas: »A New Document on the Deportation and Murder of Jews during ‘Einsatz Reinhardt’ 1942«, Holocaust and Genocide Studies 15:3, pp. 468-486). Hermann Höfle had been born in Itzling (formerly in the Gnigl municipality) on June 19, 1911 and was a mechanic and chauffer in Salzburg when he helped organize the November 1938 pogrom in Salzburg for the SS. He was rewarded for his activity by being given the apartment at 13 Hubert Sattler Gasse that had belonged to the expelled Jew Adolf Jakoby (an apartment retained by Höfle’s family until 1946). During the extermination campaign in the »Generalgouvernement« of Poland he was the »Jewish Officer« on the staff of the Higher SS and Police Commander Odilo Globocnik. As the »Jewish Officer« he was the organizer of »Aktion Reinhard«, which means he was one of those mainly responsible for the extermination of Jews in of Poland. Hermann Höfle returned to his family in Salzburg in 1947 and lived in the in Parsch neighborhood until his role in the Holocaust was brought out during the trial of Adolf Eichmann. After he was arrested, Höfle hanged himself in his cell in Vienna on August 21, 1962 (see: Winfried R. Garscha: Das Scheitern des ‚kleinen Eichmann-Prozesses’ in Österreich). 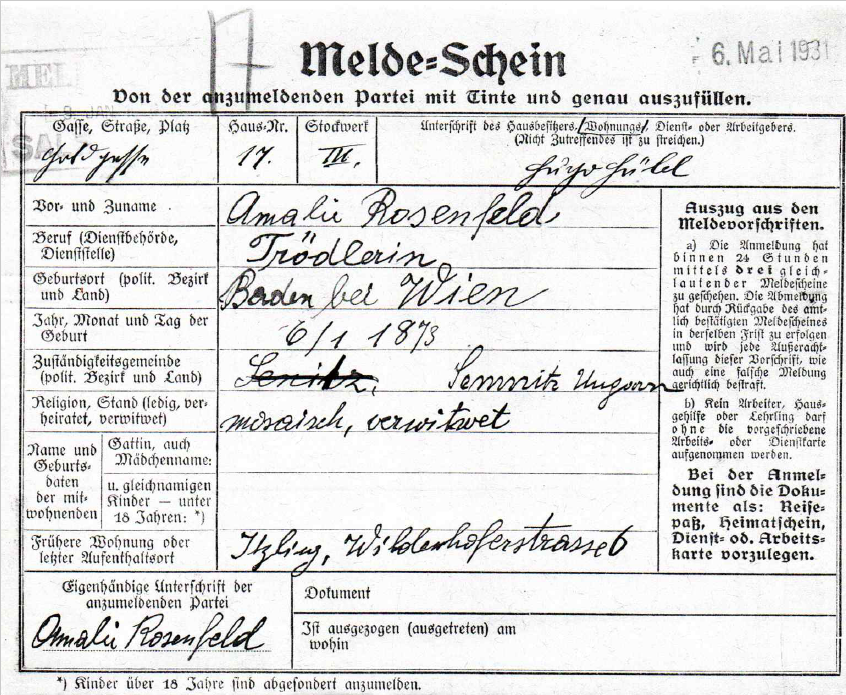 All stumbling stones at Schallmooser Hauptstraße 6