Franz HAGER was born in Zürich Switzerland on January 7, 1907, but since 1909 he lived in Salzburg with his mother (who was originally from Großarl, in the Pongau region of Salzburg Province). He trained as a tailor in Salzburg and married a woman from Upper Austria, with whom he had a son in 1931. They lived in the municipality of Maxglan, which was annexed to the city of Salzburg in 1935.

Given the lack of judicial documents we know little about HAGER’s political beliefs or activities in earlier years. The April 20, 1942 final report of the Salzburg Gestapo on the Austrian Communist Party (KPÖ) says that Franz HAGER was both a member and treasurer of the illegal Maxglan Local of the KPÖ that was set up in the summer of 1940.

Twelve of the fourteen politically persecuted activists of the Maxglan local were former members of the Social Democratic Labor Party (SDAP) and its Republican Defense League militia before they had been crushed by the Austro-fascist dictatorship on February 12, 1934.

Two other KPÖ activists worked in this war plant in the Kleßheimer Allee – Josef Musil, who survived the terror years, and Karl WEITENTHALER, who was killed in an external camp of the Mauthausen concentration camp on April 12, 1945.

It is noteworthy that this April 20, 1942 Gestapo report was written by Josef Kirschner. Kirschner was the undercover Gestapo agent who had moved to Maxglan from Bavaria to infiltrate the Communist resistance network in Salzburg. With his help the Gestapo was able to destroy the socialist and Communist resistance organizations in Salzburg early in 1942.

At least 79 activists from the two organizations in the city and state were killed in concentration camps or prisons.

When the wave of arrests took place on February 21, 1942 Franz HAGER wasn’t in Salzburg because he had been drafted into service of the Eastern Front as a member of the SS supply »Organization Todt« (OT). He was arrested in the Crimea on May 14, 1942 and sent back to Salzburg, where he was held in the Army jail on the Hellbrunnerstraße before being transferred to the jail of the Salzburg State Court. On November 2nd he was brought to trial alongside Ernst-Paul STOIBER. Although it isn’t well known, the fact is that the trials from October 27 to November 4, 1942 took place before the 2nd Senate of the Berlin »Peoples’ Court« sitting in Salzburg’s Felony Court under the direction of Walter Hartmann.

In seven court days five KP activists were sentenced to long prison terms and eleven others were sentenced to death. Three of the eleven sentenced to death had their sentences reduced to prison sentences, but the eight others were executed in the Munich Stadelheim prison: Franz ASCHENBERGER, Josef HAIDINGER, Johann ILLNER, Franz OFNER, Franz PÖTTINGER, Josef REISCHENBÖCK, Ernst-Paul STOIBER and Josef Scherleitner from Lend (who was the leader of the KPÖ regional organization for the Salzburg Alpine regions of Pongau and Pinzgau).

On November 2, 1942 Franz HAGER was sentenced to twelve years imprisonment for »conspiracy to commit treason« and he was sent to the Bavarian prison in Kaisheim on January 12, 1943. On April 4, 1944 he was transferred from there to the Army jail in Torgau (in Saxony, some 50 km north-east of Leipzig) where the prisoners were forcibly recruited for »parole service« in the German army. Franz HAGER was sent to the Eastern Front as a soldier in Penal Division 500 and was last seen alive in the vicinity of Königsberg-Tilsit in East Prussia.

In January 1945, around four months before the end of the war, 38 year old Franz HAGER sent his last field postcard to his wife in Salzburg and in January 1950 the Salzburg State Court designated January 15, 1945 as his official date of death.

Only after the court officially declared him dead five years after he was last known to be alive was his widow finally eligible for victims’ compensation. She died in Salzburg in 1997. 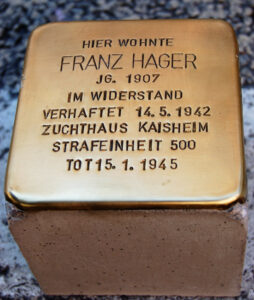 All stumbling stones at Seeauergasse 3