On May 14, 1892 Johann WAGNER was born in Kirchschlag bei Krumau, Bohemia [which was then part of Austria-Hungary, the village is now called Světlík and is in the Czech Republic near the city of Český Krumlov]. He was a married who had two children. The entire family had local citizenship rights in Salzburg and they lived in municipal housing in the Elisabethvorstadt district of the city.

Johann WAGNER worked at the Social Democrats’ Union Bread Factory at 4 Fanny von Lehnertstraße in the Elisabethvorstadt. He was a member of the Social Democratic Labor Party and the local district leader of its Republican Defense League militia. When fighting broke out in Linz in February 1934, the head of the city police, Viktor Ingomar, ordered the »preventive« arrests of Social Democratic functionaries and searches of their homes and party properties for weapons. They found neither weapons nor contingency plansfor an uprising in the apartment of the jailed Republican Defense League leader Johann WAGNER. After three months imprisonment, he and his fellow Social Democratic Party leaders Simon Abram, Karl Emminger, Heinz Kraupner, Georg Leitner, Franz Peyerl, Robert Preußler and Josef Witternigg, were released. They had never been charged or convicted, but they were kept under police observation from then on.1

Under the Nazi-Regime Johann WAGNER was the only one of those who had been arrested in Salzburg in February 1934 in Salzburg who joined the Austrian Revolutionary Socialists (RSÖ) resistance. The Salzburg resistance group led by railroader Engelbert Weiss was smashed by the Gestapo early in 1942. The arrested socialists, most of them railroaders, had no weapons and there was no evidence that they had planned to commit sabotage, but they were all convicted of conspiracy to commit treason and nine of the ten were murdered in prisons or concentration camps. Johann WAGNER was arrested at his workplace on March 21, 1943 and he was sentenced to three years imprisonment by the Vienna Region Supreme Court on October 8, 1943. He was imprisoned in Bruchsal bei Karlsruhe and he died there on June 6, 1944 at age 51.

His widow was eligible for victims’ compensation in post-war Austria and died in Salzburg in 1968 in Salzburg. Both of their daughters left Salzburg. 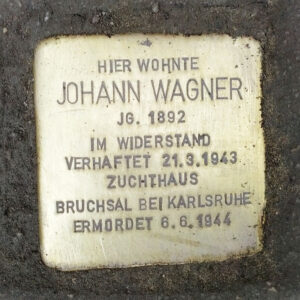 All stumbling stones at Plainstraße 5