Johann GRUBER was born in Attnang (in the Vöcklabruck district of Upper Austria) on June 18, 1904. He was a married Jehovah’s Witness and a plumber by trade. Since 1935 he had lived with his wife at 4 Kirchbergsteig (Radauer House) in the Gnigl district of the city of Salzburg.

The 35 year old Johann GRUBER was arrested by the Gestapo on May 13, 1939 for refusing military service on religious grounds. He was sent at first to the Dachau concentration camp, but was transferred to the Mauthausen concentration camp on September 27, 1939 – where he was murdered on January 19, 1940.1

1 On January 29, 1940 another Jehovah’s Witness from Salzburg was also murdered in the Mauthausen concentration camp: Roman Franzmeier had been born in Salzburg’s Itzling neighborhood on February 14, 1904, but by the late 1930s he lived with his family in Weissenbach bei Strobl in the Salzburg Lake district.
His wife Elisabeth was murdered in Auschwitz in 1942. Their three orphaned children, Alois, Ernst and Elisabeth, were later entitled to victims’ assistance. 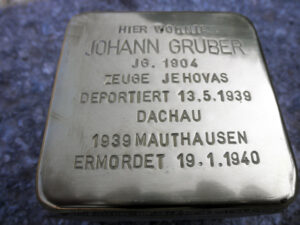 All stumbling stones at Kirchbergsteig 4