Hermine BECHINSKY, née STEIN, was a Jewish woman who had been born on May 25, 1861 in Teltsch, Moravia [then part of the Austrian Empire, now Telč in the Czech Republic]. She lived in Vienna with her husband, the industrial clerk Josef BECHINSKY, until he died at age 58 on December 3, 1912 and was buried in the Jewish section of Vienna’s Zentralfriedhof.

After the death of her husband she moved to Salzburg to live with her daughter Ella, who had been born on Juli 15, 1886 in Teltsch (Telč). Ella was married to Dr. Otto FUCHS, a high-school teacher in Salzburg, and they all lived at 19 Schlachthofgasse/15 Rainerstraße. The Catholic Dr. FUCHS was dismissed from his teaching position in 1938 because he refused to divorce his Jewish wife.

That protected Ella FUCHS from the worst of the persecution, but a piece of property she owned in Salzburg-Josefiau was confiscated in 1939 (nor was it returned to her after the defeat of Nazi Germany in 1945). The FUCHS couple survived the terror years and continued to live at 19 Schlachthofgasse/15 Rainerstraße. Ella FUCHS, née BECHINSKY, died in Salzburg on July 27, 1964.

The fate of Ella’s mother Hermine remained unknown for a long time because she was a Czechoslovakian citizen and wasn’t included in the Austrian Shoah-Databank. The widowed Hermine BECHINSKY fled to her then still free homeland of Czechoslovakia in 1938. But in March 1939 Czechoslovakia was occupied by Nazi Germany and turned into the so-called »Reich’s Protectorate of Bohemia and Moravia«. Hermine BECHINSKY was deported to the Theresienstadt concentration camp as prisoner number 666 of transport Av from Trebitsch (Trebič) in Moravia on May 18 1942 and she was murdered there at age 81 on April 30, 1943. 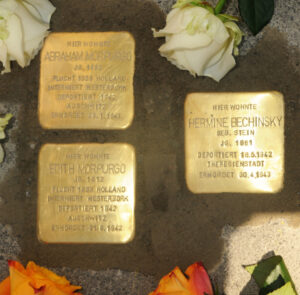 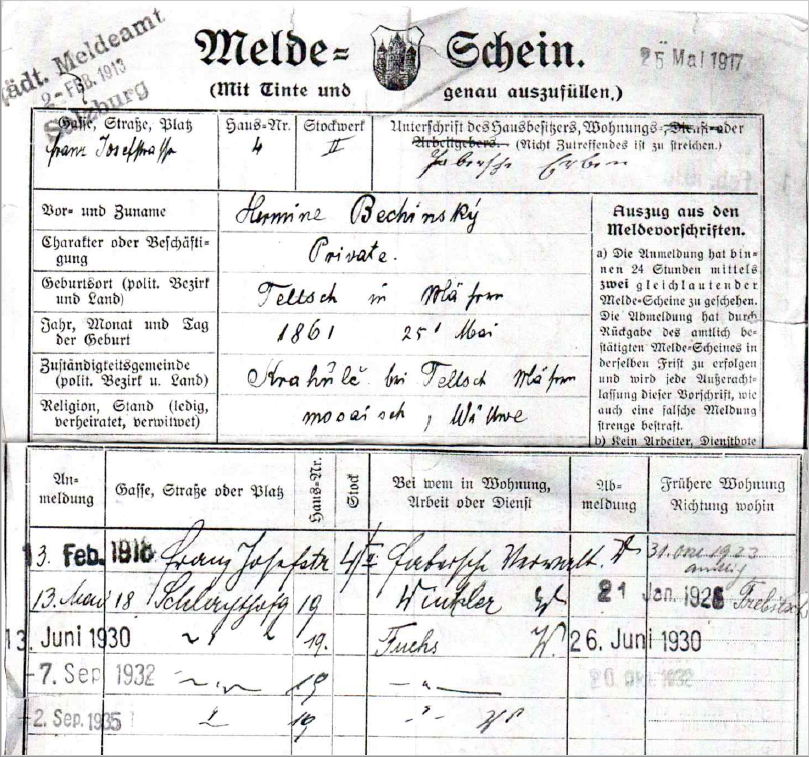 All stumbling stones at Hans-Prodinger-Straße 19