Jozef KOSCIOLEK was born in Kraków on January 17, 1899 when it was part of Austria-Hungary. He was a Roman Catholic machinist who had Polish citizenship after Poland became independent in 1918.

He lived with his family in Zabierzow, a rural district northeast of Kraków until he was conscripted for forced labor in the Third Reich during WWII.

Jozef KOSCIOLEK was one of the POWs and »civilian workers« who appears in the remaining files from the forced labor camps, otherwise we wouldn’t know that he had to work as a machinist for the Deutsche Reichsbahn [German RR] in Salzburg (an »essential war industry«).

The identity and fate of these victims of secret deaths without outside witnesses can only be clarified with the help of the documentation provided by the Nazi regime. As the responsible agency, the Gestapo sought to document their victims’ deaths as the results of their own actions and responsibility – as opposed to being the victims of state terrorism, which is what they were.

In this case the Salzburg Gestapo didn’t even note the reason for the arrest – refusal to work, flight, or »anti-state behavior«. The death register of the Salzburg Gestapo, led by Dr. Hubert Hueber, reported the death of 43 year old Jozef Kosciolek as follows:

The Polish civilian worker Kosciolek Josef was found hanged in the holding cell of this office at around 4pm on 11/ 23/19 43. The body can be released for burial as it is obviously suicide. Hueber

Under Nazi rule in Salzburg the official address of »this office« was 5 Hofstallgasse – where the Salzburg Gestapo had their headquarters in the cloister that they had requisitioned from the Franciscans (it is now 5 Franziskanergasse).

There the Gestapo had a small holding cell for prisoners under interrogation, a small bare cell where Jozef Kosciolek is supposed to have hanged himself. The Gestapo’s death certificate was signed by a doctor with an illegible signature attesting to the cause of death. Nothing here indicates how the prisoner could have hanged himself in the bare holding cell without help – without any rope or hooks – but the doctor indicated no doubt about the Gestapo’s report, no suspicion of abuse leading to death, or murder and state terrorism.

The death certificate just names the Gestapo HQ as the place of death and the Salzburg municipal cemetery as the place of burial – any attempt to locate a specific grave would be pointless as forced laborers and terror victims were generally buried in the »tomb of the forgotten«, which is how the area for anonymous graves and urns has been called since the liberation in 1945.

In this the Nazi regime did achieve one of its goals, to hide the evidence of its terror campaign and to prevent survivors from honoring its victims. Survivors from foreign forced laborers, including the family of Jozef KOSCIOLEK, had in any case no legal claim to victims’ compensation or pensions.

Since 1995 a memorial tablet has been hanging on the wall next to the entrance to the Franciscan Cloister that reads: »From 1938 to 1945 this cloister was requisitioned by the Gestapo. In memory of agony, torture and death of uncounted victims / The City of Salzburg.«

The adjective »uncounted« can be taken two ways as the term uncounted can mean that these victims didn’t count and not just that their number is unknown. They remained anonymous victims whose names and histories were unknown because there was no effort to investigate the identities of these »uncounted victims«. But while the victims remained unknown, the perpetrators were indeed known.

The personnel of the Salzburg Gestapo office have been identified and the police registration files make it possible to discover whether these Gestapo agents were arrested or went underground after the 1945 liberation. The ones who were arrested were interned until August 1947on the southern end of the city in the US prison camp Marcus W. Orr [called the Glasenbach camp because the troops guarding the camp were stationed in the Glasenbach Barracks nearby].

But crimes against humanity, violations of human dignity, and physical abuse could only be prosecuted in the case of testimonies, police investigations and complaints under the Austrian War Crimes Act.

Official notice was taken of some Gestapo murders taken without any judicial process, like the murders of the Ukrainian forced laborers Alexander DUBINA, Rawis PLACHE, Leonid STEPANOW and Wladimir SLESAROW on August 20, 1943 in the courtyard of the Oberascher munitions work; the executions of the Poles Aleksy Jagla, Jan Obreski, Pawel Fronzek, Walentyn Pilch and Eugenius Wojtak in Salzburg rural districts; and the murder of the Belgian couple Ramackers [or Ramakers] in the Salzburg Gestapo cellar on April 24, 1945.

The identity of those murdered there – according to a Gestapo secretary their naked bodies were thrown into the nearby Salzach to float away in the bright moonlight – is still not clearly established. The Gestapo agents Georg König, Hans Gross, »Kurt« [Max] Kaiser and Alexander »Riesling« [Rißling] who are identified in the police files as the instigators and perpetrators of these murders were able to escape responsibility by fleeing and were never brought to justice.

So even in the few cases of legally documented murdes by the Gestapo in Salzburg the perpetrators remained unpunished.

What is especially noteworthy, however, is the career and post-war experience of Dr. Hubert Hueber. He had been an illegal Austrian Nazi party member from 1933 to 1938 and was a police lawyer in Linz and Wiener Neustadt. From 1942 to 1945 he was the SS-Obersturmbannführer [Lieutenant Colonel, a rank he shared with Adolf Eichmann] who ran the Gestapo in Salzburg.

He was arrested by the US occupation forces in 1945 and interned in the Glasenbach prison camp for SS members. Dr. Hubert Hueber was named in the »first Salzburg war criminals list«, so he was criminally responsible under the Austrian War Criminal and Prohibition Law.

On March 15, 1950 the »people’s court« at the Linz Superior Court convicted him of complicity in the crimes of torture and mistreatment, crimes against humanity and human dignity, and of the crime of treason against the Austrian people. For all of these serious crimes he was sentenced to a mere four and a half years of imprisonment.

As for the serious charge of having had foreign forced laborers liquidated, he was acquitted on the grounds that he had only followed orders from higher authorities in Berlin – which is what witnesses for his defense claimed and which the court seemed to believe along with other claims in his defense:

Other allegedly mitigating circumstances that the court accepted at sentencing included:

… the partial admission, previous blamelessness and good repute of the accused along with the need for support of his innocent family [Dr. Hueber’s wife and sons] and above all the fact confirmed by the [defense] witness Josef Mitterndorfer that the accused, who gives the impression of being an honorable, open and good-natured character, had in many cases intervened to help Jews and persecuted opponents of the Nazis and saved them much misery and misfortune.

The judgement of March 15, 1950 gave the impression that through the efforts of Gestapo chief Dr. Hueber worse things had been prevented from happening and that many unidentified opponents and Jews owed him their lives – according to a testimony that the court credited with being a proven fact rather than just a defense claim. And based on this they turned the accused into a life saver rather than a perpetrator.

By a strange coincidence the sentence of four and a half years imprisonment just happened to match precisely the time of Dr. Huber’s investigative custody (including his internment in Camp Glasenbach) so his sentence expired the very day of his sentencing and he was free to go.

The first chief of the Salzburg Gestapo was punished even less. Dr. Rudolf Mildner was also an Austrian lawyer and had been a police officer in Salzburg since the 1920s and had local citizenship rights in Salzburg. His police and SS careers are well documented in his Wikipedia entry: among other things he served as the head of the Gestapo and its court in Katowice Poland – condemning thousands of Poles to death in the nearby Auschwitz concentration camp.

Mildner was interned by the Americans in 1945 and became a prosecution witness at the Nuremberg Trials who was protected by the US authorities who »saved him from landing in the hands of war crimes investigators, because his knowledge of communist subversion was considered useful«.

Mildner disappeared in 1949 and officially he was never heard of again, though Adolf Eichman claimed he had seen him in Argentina. Mildner’s family continued to live in Salzburg.

The perpetrators of Nazi Germany continue to attract interest from the public today. But the »countless« victims of the racist criminal laws that allowed the Gestapo and SS to execute them without trial gradually disappear from memory. 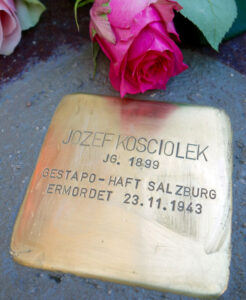 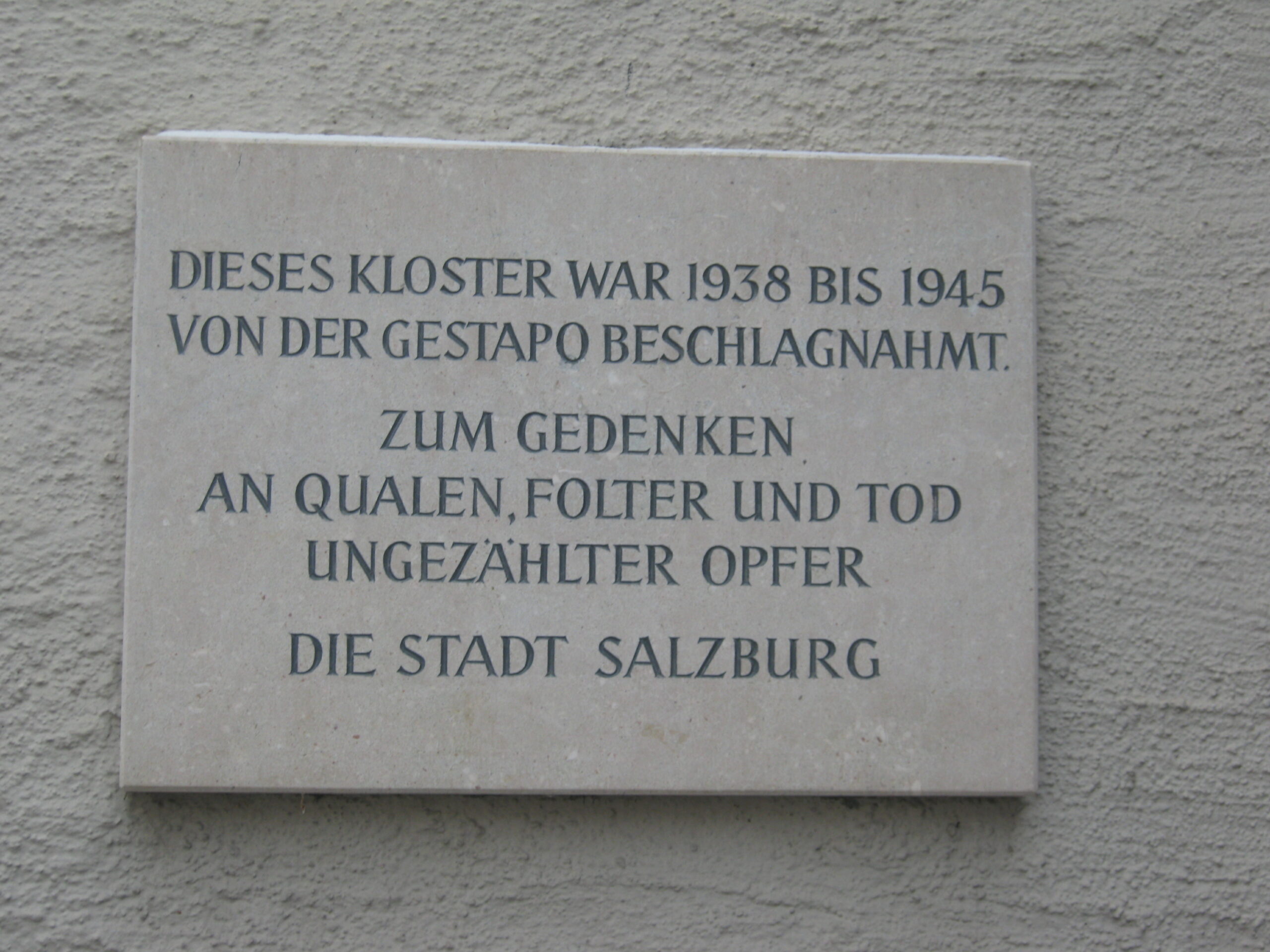 Memorial for the victims of the Gestapo at the Franciscan Cloister
Photo: Andrea Loidl 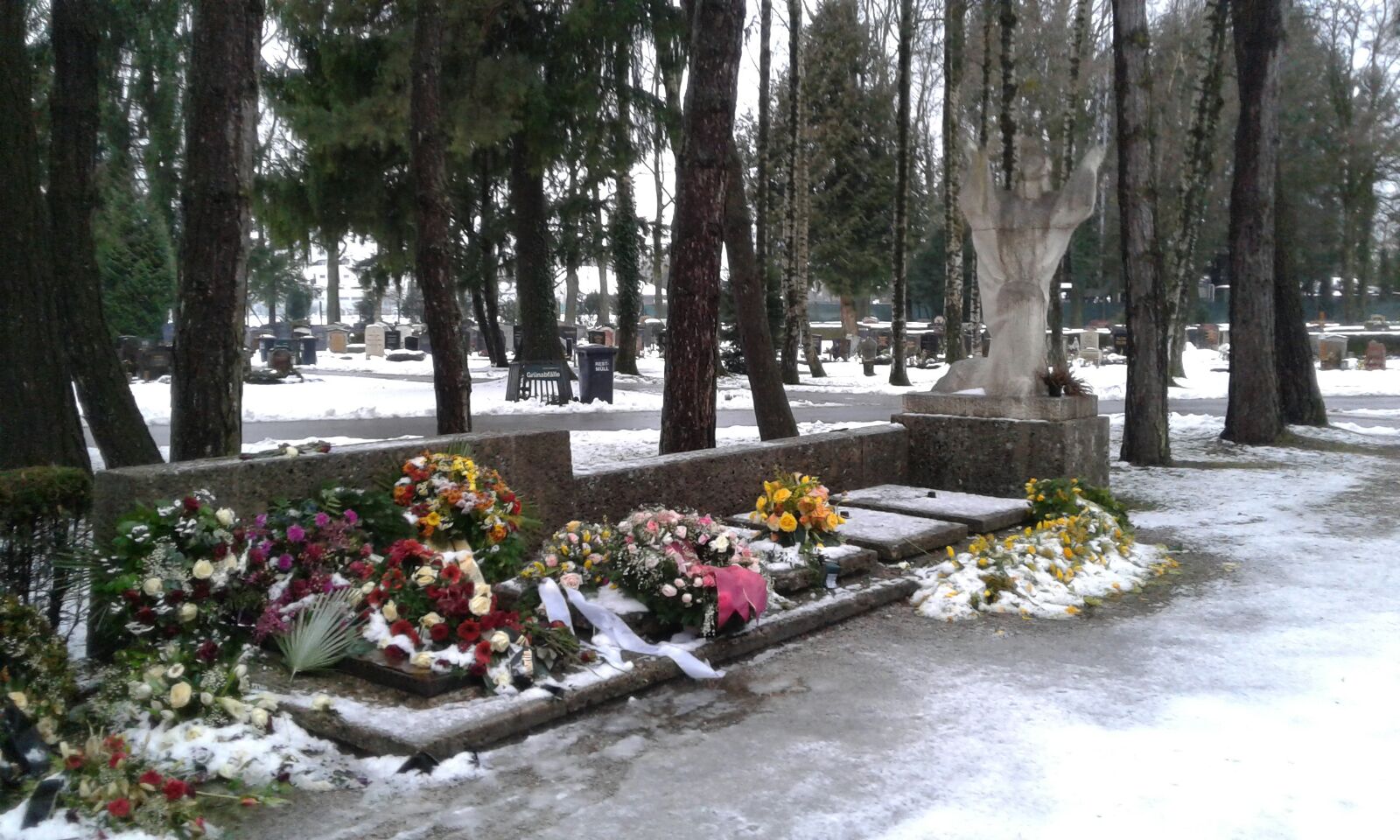 All stumbling stones at Franziskanergasse 5