On November 28, 1943, the Salzburg Gestapo had two Jewish women, Regine and Federica VERSCHLEISSER, mother and daughter, deported from the Salzburg City Police jail to Auschwitz.
Both were murdered in Auschwitz: the mother Regine on December 27, 1943, her daughter Federica two days later, on December 29th.

It is also documented that Adolfo VERSCHLEISSER, Regine’s husband and Federica’s father, was killed in the Dachau concentration camp on March 19, 1944.

But we would seek in vain for members of the VERSCHLEISSER family among the victims of the Nazi terror to appear in the Dokumentation Widerstand und Verfolgung in Salzburg [Documentation Resistance and Persecution in Salzburg] published in 1991 or in the victim database of the Documentation Archive of the Austrian Resistance (DÖW).

In the meantime, the identity of the Shoah victims Regine, Adolfo and Federica VERSCHLEISSER has been clarified:

Regine was born in Uhersko, Bezirk Stryj, in the Austrian Crown Land of Galicia [now the Lviv Oblast, Ukraine] on March 25, 1879. She was a daughter of Leo Seemann and Lea Seemann née Rosenberg. Regine was the wife of Adolfo VERSCHLEISSER, who had been born on May 10, 1872 in Lemberg Austria-Hungary [as it was called in German, it was Lwów in Polish, and L’viv in Ukrainian—it became part of Poland after WWI, and is now in the Ukraine].

Their daughter Federica was born in her mother’s home town of Uhersko on September 9, 1899. Research has shown that the VERSCHLEISSER family lived for several decades in the Austrian port city of Pola [Pula in Croatian] on the Adriatic Sea which became Italian territory after WWI. Under Italian rule their address was: Pola, Via Garibaldi 13.

After September 1943, a branch of the »Adriatic Coastal Operation Zone« operated in Pola – an operation led from Trieste by SS-Gruppenführer Odilo Globocnik as »Higher SS and Police Leader«. He was responsible for torture and murders in the Risiera di San Sabba concentration camp and for the deportations of political and Jewish prisoners from there to Auschwitz – with a stopover in Salzburg.

Finally, it should be noted that the Gestapo Salzburg had around 300 women of foreign origin, including Regine and Federica VERSCHLEISSER, deported to Auschwitz, as can be seen in the fragmentary detention book of the Salzburg police prison. 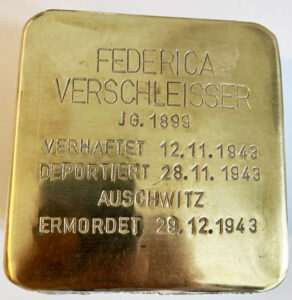