Anna SCHNEIDER was born in the city of Hallein, a few miles south of Salzburg, on December 6, 1900. She was baptized in the Roman Catholic and was the oldest of the six or seven children of Mathilde Schneider, née Bumbicka, and Josef Schneider, a customs agent in Hallein.

The Baptismal Records of the Hallein Parish include a notation about the death of Anna Schneider: »died June 9, 1944« according to a message from the Berlin-Charlottenburg registry office.

Certainty about her violent death only came when the Arolsen Archives became publicly accessible: there we learn that Anna SCHNEIDER was an anti-Nazi woman from Hallein and a victim of the Nazi terror.

Some remarkable details from her life have now been documented: Anna SCHNEIDER, who had attended a secondary school and commercial school, left Austria at the age of 19 after the end of the First World War.

She lived abroad for around 22 years, first in Switzerland and then in France starting in 1925. She worked as a nanny, domestic servant and private secretary in Paris.

We don’t know why she returned to Hallein at the age of 40 in June 1941 when the Nazi regime was in complete control. That was unlike her younger sister Erna, who also lived in Paris and married there – Erna died in Neuilly-sur-Seine France in 1997 at the age of 84.

Anna SCHNEIDER started working in Zell am See in November 1942. She was the manager of the Hotel Lebzelter. On September 30, 1943, she visited Hallein, her home town – a fateful train journey, during which she exchanged a few words with some French civilian workers and had a lengthy conversation with a guest she knew from the Hotel Lebzelter.

She is said to have been overheard making positive comments about the situation in the Soviet Union. A fellow passenger who was listening in silence informed the Gestapo in Salzburg. The informer’s name was Marie Luise von Szabel, an officer’s wife who lived at 5 Sezenweingasse in Salzburg.

Anna SCHNEIDER was arrested by the Gestapo and held in the Salzburg police jail until January 18, 1944 when the Gestapo had her transferred to Berlin-Moabit. There she was charged before the »People’s Court« for »undermining the military power and favoring the enemy«:

Out of anti-state sentiment, in autumn 1943 in Zell am See and on the occasion of a train journey from Zell am See to Hallein, she attempted to undermine the German will to defend herself by attacking the National Socialist Reich and praising the Soviet Union.

On April 25, 1944, the 3rd Senate of the People’s Court (chaired by Paul Lämmle) pronounced the death sentence »in the name of the German people«:

In the fifth year of the war, the defendant Anna Schneider carried out defeatist propaganda in an overcrowded railway compartment and in the presence of two foreigners and glorified conditions in the Soviet Union.
As the subversive propagandist of our enemies, she is forever dishonored and punishable by death.

Her plea for mercy dated April 28, 1944, written by hand in the women’s prison in Berlin, Barnimstrasse 10, went unheeded. On June 9, 1944, Anna SCHNEIDER was beheaded at the age of 43 in the Berlin-Plötzensee prison.

Recent research has discovered that Anna SCHNEIDER – just like Rosa HOFMANN, the resistance woman from Salzburg – is one of the 182 execution victims found on a list of the anatomist Dr. Hermann Stieve. Under the Nazi regime, Dr. Stieve carried out special experiments on female genital organs at the famous Berlin Charité hospital.

After the liberation in 1945, Dr. Stieve was able to continue his career unmolested in East Berlin and was the recipient of the GDR National Prize before his death in 1952.

The remains of his victims, including hose of Rosa HOFMANN and Anna SCHNEIDER, were discovered decades later and were only buried in Berlin’s Dorotheenstädtischer Friedhof in 2019. 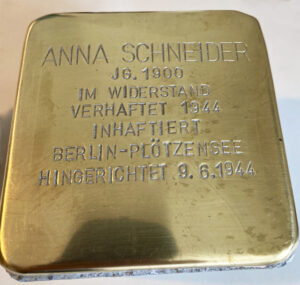