Ernst-Paul STOIBER was born in Salzburg on May 10, 1922. He was the older of the two children of Franziska and Michael Stoiber – a railroader who belonged to the Social Democratic Labor Party along with its associated Free Trade Union and Republican Guard militia until they were banned in February 1934. The family, which had left the Catholic Church and joined the Freethinkers’ movement in 1927, had local citizenship rights in Salzburg and lived in a building for employees of the Austrian Railroads at 6 Fanny-von-Lehnertstraße in the Elisabethvorstadt neighborhood.

Ernst-Paul learned carpentry and experienced the Austrian dictatorship and the Nazi regime as a teenager – he was only sixteen when the Nazis took over Austria in 1938. As a 19 year old he was drafted into the German army on October 3, 1941. In the meantime Ernst-Paul, who had been socialized in the social democratic milieu became active in the Communist youth movement along with his young friends Franz OFNER (a hairdresser in the Itzling neighborhood), Rosa HOFMANN (a seamstress in Maxglan), and the two journeymen carpenters Rupert Steiner and Josef »Joschi« Brunauer.1 This illegal activity became especially dangerous after the attack on the Soviet Union in June 1941. The Communist youth group saw educating young people about fascism and was as their primary task-sabotage and armed struggle were out of the question, as was refusing military service. In February 1941 Franz OFNER was the first of the group to be drafted into the German army. Ernst-Paul STOIBER then led the group until he was drafted in October 1941. Then their friend and comrade Rosa HOFMANN took over the leadership.

At the beginning of 1942 the Gestapo was able to infiltrate, roll up and smash all of the socialist and communist resistance groups in Salzburg. In order to stifle forever any organized resistance movement, the Gestapo deported seven of the wives of members of the Gnigl and Itzling Communist organization to the Auschwitz extermination camp over the course of 1942. Only one of the seven survived. At least 32 Communist resistance members from the city of Salzburg were killed in the Nazis’ prisons and concentration camps – including the youths Rosa HOFMANN, Ernst-Paul STOIBER and Franz Ofner.

The experience of young Ernst-Paul STOIBER who had been in the Salzburg State Court jail since April 17, 1942 was especially tragic. On the way to an interrogation by the Gestapo on April 24 he fell (or jumped) from the 3rd floor of the staircase. He survived, but was still suffering from his severe injuries when he was sentenced to death for »conspiracy to commit treason« by the »Peoples’ Court« on November 2, 1942. He was decapitated in the Munich-Stadelheim prison on June 10, 1943 shortly after his 21st birthday. His 19 year old sister Irmgard got a parting letter from her brother:

Dear little sister! I send you my entire appeal to help our loved ones bear this blow and to double and triple your efforts from earlier posts. Of course I’m leaving you with the hardest task, but I’m sure you will mange it. From the bottom of my heart I wish you the best for your future life – be happy and build yourself a decent life. […] from your brother Ernst

His sister Irmgard was jailed in Salzburg on political grounds from July 10, 1942 to March 29, 1943, but she was acquitted of the charges. She got married after the liberation of Salzburg and died here when she was 60 years old. Their mother died in 1967 at age 76 and their father died in a home for the aged in March 1988 at age 99. A Salzburg Anti-Fascist Committee initiative in 1994 led to having a street near the Salzburg airport named the Ernst-Stoiber Weg.

1 Rupert Steiner (who had been born in Hallein on April 18, 1920) survived his political persecution (arrest, army service & penal regiment), was later the district leader of the Communist »Free Austrian Youth« (FÖJ/KPÖ) and died in Hallein on April 24, 1992. Josef Brunauer (who had been born in Salzburg on August 4, 1921) also survived his political persecution in Salzburg (arrest, army service & prisoner of war), was later a trade union official, Socialist Party politician, state assemblyman, state council member, and president of the Chamber of Labor, He died in Salzburg on September 9, 1999. 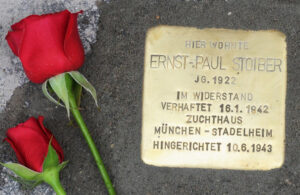 All stumbling stones at Fanny-von-Lehnertstraße 6