Johann FACINELLI was born in Bischofshofen (Salzburg Province) on October 27, 1887. He was a married Roman Catholic innkeeper in Bischofshofen and a member of the Austro-Fascist Home Guard.

On July 26, 1934 he participated in the suppression of the Nazi’s attempted coup d’état as an auxiliary policeman in the fighting at the Mandling Pass near the town of Radstadt. Afterwards he moved to the city of Salzburg with his family.

In Salzburg, he worked for the official health insurance agency until he was arrested on March 13, 1938 for his participation in the suppression of the Nazi coup attempt.1

The 50 year old Johann FACINELLI was shipped off to »protective custody« in the Dachau Concentration Camp on April 11, 1938 and he was murdered there on June 4, 1938 – one of many revenge victims of the Nazi regime.

Johann FACINELLI left behind a wife and four minor children. His widow was entitled to a victims’ pension after the Liberation and she died in Salzburg in 1973.

1 Process of the Salzburg Provincial Court against nine Heimwehr men who took part in the defeat of the Nazi attempted coup d’état at Radstadt; interrogation of the accused Johann FACINELLI on Mai 20, 1938 – fifteen days before his murder in the Dachau Concentration Camp. 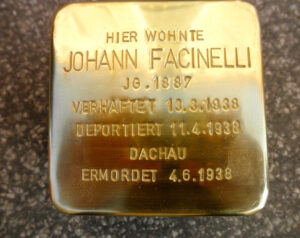 All stumbling stones at Rupertgasse 13