Marie RAUTER was born in Salzburg on December 31, 1900 and was the youngest of the three children of the Catholic couple Katharina and Josef RAUTER. The family had local citizenship rights in Salzburg and lived in the Riedenburg neighborhood.

Marie’s father was a butcher who dies in 1926 and her mother died in 1940. Marie worked for her brother as a chambermaid and never married.

On October 26 1939 Marie RAUTER became a patient in the Schloss Schernberg sanatorium maintained by the Merciful Sisters of St. Vincent de Paul in Schwarzach (in the Pongau region of Salzburg). Despite the »most courageous protest of the Church in Salzburg« (Ernst Hanisch) Schloss Schernberg was targeted by the Nazi regime’s »Euthenasia« program along with the Salzburg State Asylum.

Forty year old Marie RAUTER was one of the 115 patients who were deported from Schloss Schernberg to the Hartheim Castle killing center near Linz on April 21, 1941 – where they were all murdered. As with all the other victims of the Nazis’ secret »T4«1 program, Marie RAUTER’s death was not recorded in the Salzburg police registration files.

Her sister Katharina died in Salzburg at age 73, as did her brother Franz (who was a butcher like his father) at age 87. 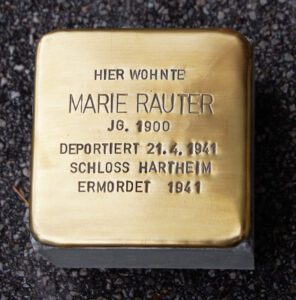 All stumbling stones at Neutorstraße 28