Ludwig STÖSSEL was born on February 12, 1883 in Léka (Lockenhaus), in what was then Hungary but which has been part of Austrian Burgenland since 1921.

He was the third of four children of the Jewish couple Berta Stössel neé Kopfstein and Leopold Stössel.

The Stössels lived in Graz, the capital of Styria, from the 1890s on. Ludwig’s father was a shopkeeper. Ludwig’s older brother Oskar studied civil engineering for a while, then painting and graphics in Graz and Vienna before becoming a renowned artist.

Ludwig STÖSSEL trained as an actor with Maximiliane Bleibtreu, a leading actress who was active in the Graz theater scene from 1899 to 1903. He was was considered a »talented student of the art« and had his first stage appearance at a festival of the Workers’ Theater in the Graz Industrial Hall on November 10, 1901.

STÖSSEL’s performances on German and Austrian provincial stages were well known although he mostly played in supporting roles. But then he succeeded as a director and character actor at the Salzburg City Theater (now called the State Theater).

In October 1909 STÖSSEL had his debut as director with Goethe’s Faust, where he also excelled playing the role of »Mephistopheles«.

Someone, like him, who knows how to portray the satanic wickedness, the diabolical glee of evil in words and gestures, is a great artist.
Salzburger Chronik, October 25, 1909, p. 9

Ludwig STÖSSEL also earned much praise in Salzburg for his portrayal of Shylock in Shakespeare’s The Merchant of Venice:

He characterized the hate filled Jew excellently, was moderate in tone and gesture, and in the last act, in particular, offered a performance worthy of the warmest recognition.
Salzburger Volksblatt, November 22, 1909, p. 3

It was due to the skill of the actor STÖSSEL that his »Shylock« was not perceived as an anti-Jewish caricature. But at that time his Jewish origins weren’t known in Salzburg however, otherwise he wouldn’t have gotten such good reviews.

Other sites of his stage creations were Königsberg in East Prussia [now Russian Kaliningrad], Breslau in Silesia [now Polish Wrocław] and Berlin.

On June 2, 1919 Ludwig STÖSSEL married the singer Eleonore Babette Birn, (called Lore) in Breslau. She had been born in Dresden on October 21, 1889). She was a Protestant and not Jewish.

In 1931-1932, before the Nazi’s took power in Germany, STÖSSEL was able to participate in two of Max REINHARDT’s productions in Berlin: as »Kalchas« in Jacques Offenbach’s Operetta Die schöne Helena and as »Dr. Wuttke« in Gerhart Hauptmann’s play Vor Sonnenuntergang.

Towards the end of 1933 Ludwig STÖSSEL had to leave Berlin. He went to Vienna, where he got the lead role in the light comedy Vorstadtkomödie at the Raimund-Theater and became a popular star as »Master Clockmaker Bamstingl«:

… in this Vorstadtkomödie he is a popular actor perfectly fitted for the hearts of the Viennese.
Illustrierte Kronen-Zeitung, September 29, 1934, p. 10

In the last Salzburg Festival summers from 1935 to 1937 STÖSSEL played the roles of »Wagner« and »Altmayer« in Goethe’s Faust as well as the »Devil« in Jedermann.

Ludwig STÖSSEL was reportedly able to inspire his audience when playing this role:

… with a devil like Ludwig Stössel a pact can be made – namely a contract with a lifelong obligation to play the devil in Salzburg’s Jedermann. We like this devil that much ...
Salzburger Volksblatt, July 27, 1936, p. 7

So, as the popular favorite in Salzburg, STÖSSEL, could have played the »Devil« for the rest of his life – if he hadn’t been Jewish. While that wasn’t widely known in Salzburg, the Nazis who took over Austria did know it and so the Austrian career of Ludwig STÖSSEL came to an abrupt end in March 1938.

In July 1938 he and his wife Lore were able to flee to England via Switzerland, and then to travel on to the USA.

Remarkably, Ludwig STÖSSEL was able to make a career in Hollywood despite his unmistakable German accent – although only in small roles and scenes. STÖSSEL achieved lasting fame in the 1942 classic cult film Casablanca where he played »Mr. Leuchtag«, a Jewish refugee celebrating having just gotten a visa for the US.

The cut film version that German-speaking cinema audiences saw in the 1950s was just a harmless romance with most of the politics left out. The anti-Hitler-films »Hitler’s Madman« and »The Strange Death of Adolph Hitler«, where STÖSSEL played minor roles, were too explicitly political to be bowdlerized and were just never shown in German-speaking countries.

He generally played elderly Germanic types like the famous baseball player Lou Gehrig’s father in »Pride of the Yankees« and Albert Einstein in »The Beginning of the End«.

In the 1960s he played »That Little Old Winemaker, Me!« dressed in an Alpine costume in a series of television advertisements for Italian Swiss Colony Wines that became a cult classic.

Ludwig STÖSSEL’s sister Isabella and her husband Max Stessel, who had been married in the Graz synagogue in 1906, were murdered in the Treblinka death camp in 1942.

STÖSSEL’s older brother Oskar was also able to reach American exile in 1938, but he returned to Austria as a US citizen in the 1950s and died in Vienna in 1964.

Ludwig STÖSSEL died in Hollywood shortly before his 90th birthday, on January 29, 1973. His wife Lore died there two years later. 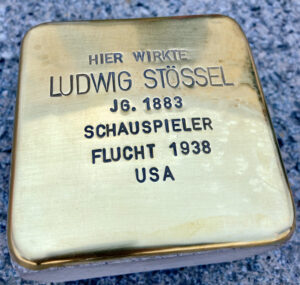 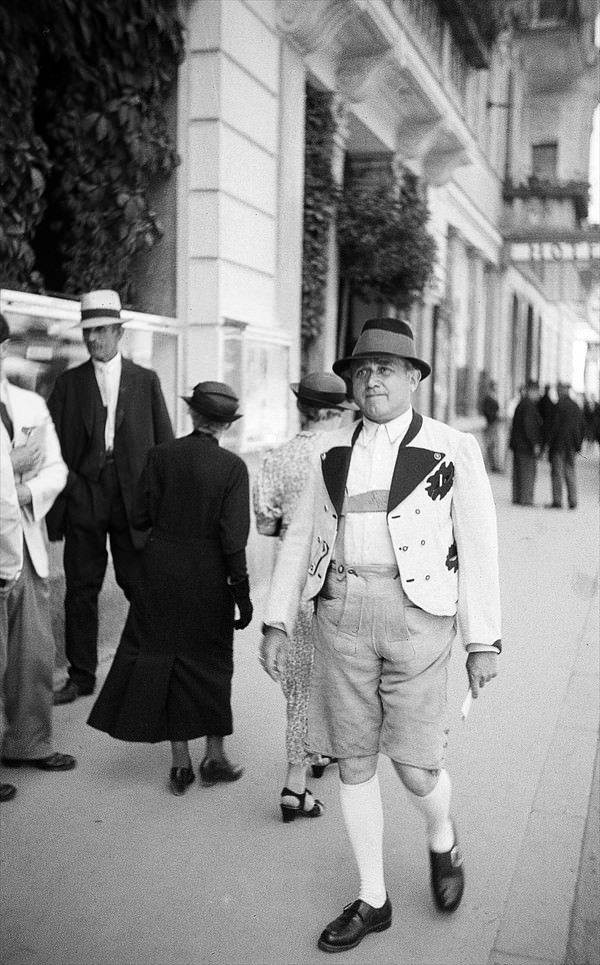 Ludwig Stössel: In Salzburg where he played »The Devil« in the Salzburg Jedermann productions (1935-1937)
Source: Salzburg City Archives 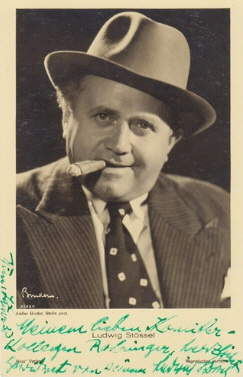