Bronislaw Weja was born in Berestowice (which was then in the Volhynia Province of the Russian Empire)1 on September 18, 1898. He was an unmarried Roman Catholic Polish citizen who lived in Ostrog Poland (now Ostroh Ukraine) when he was drafted into forced labor in the German Third Reich during WWII. The police registered him in Salzburg in October 1943 and he last worked as an unskilled laborer in the so-called Kapitelhaus, which was national government property under the Nazi regime.

On March 8, 1944 the 45 year old Polish forced laborer was arrested and interrogated by the Gestapo, presumably because had changed his workplace without authorization. That night he was dead- officially a suicide. The Gestapo report claims that the Pole Bronislaw Weja, who had been arrested on March 8 for »breaking his labor contract«, had hanged himself in a one prisoner cell of the Salzburg State Court at 3:50 am on the 9th and that he had been buried in the »poor sinners’ corner« of the city cemetery after a »successful coroner’s viewing« on March 10.

The place of death for Bronislaw Weja cited in the Gestapo report is dubious: a single prisoner cell in the State Court jail, and that without any arrest order from a judge. It is much more likely that the forced laborer died either in Gestapo headquarters or the police jail. There is no doubt though about the report by the Gestapo that Bronislaw Weja was buried in a remote corner of the city cemetery – that was normally the case with suicides. That way the Gestapo acquitted itself of any suspicion of violence. By listing the murdered or driven to his death Polish forced laborer as a suicide his name would be forever lost and the truth buried with him in an unmarked anonymous grave.

1 It had been Polish before it had been annexed by Russia in the 1790s and it became Poland again after WWI, before coming under Soviet control – it is now Berestovets in Ukraine. 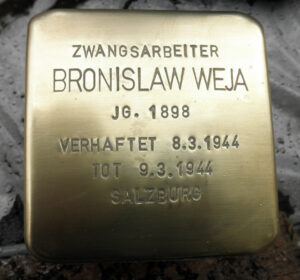 All stumbling stones at Kapitelgasse 4