Johann ILLNER was born in St. Laurenz bei Altheim, in the Braunau district of Upper Austria on December 8, 1908. He was a married Catholic who had started working as a bartender and lived with his wife at number 10 Stauffenstaße in the Elisabethvorstadt neighborhood of Salzburg.

Johann ILLNER worked in the German Post Office’s telegraph construction office in Salzburg starting in 1938 and was a member of the Nazi party from then on. He had contact at work with the mechanic Anton Reindl, who sought to win him over to his resistance group associated with the Communist Party of Austria. After some hesitation ILLNER joined the illegal Communist party and became the treasurer and leader of a Communist cell. At the beginning of 1942 the Gestapo was able to infiltrate, roll up and smash the illegal regional organization of the Communist party. At least 32 Communist resistors from the city of Salzburg were killed in the prisons, concentration camps and extermination camps of Nazi Germany.

Johann ILLNER was arrested by the Gestapo on January 18, 1942. On November 3, 1942, along with his work colleague Franz Pöttinger, he was sentenced to death for conspiring to commit treason by the »People’s Court« set up by the Nazis to try their enemies. The two men were decapitated in the Munich-Stadelheim prison on April 19, 1943. As a Catholic, the 34 year old Johann ILLNER received the sacrament of the last rites and wrote his wife Elise and his widowed father these parting words:

… sadly I can’t do anything further against the last decision and must now part from this world without reaching my goal of finally taking care of you both. I believe I did my best and I ask you again to forgive me for the injustice and suffering I have caused you … Now for parting once again lots of greetings and kisses from your departing Hans. Stay strong and stay by each other. May God protect you.

His widowed father died in Salzburg in 1947. His widow received victims’ assistance in liberated Austria and died in the Salzburg Itzling neighborhood old age home in 1985. 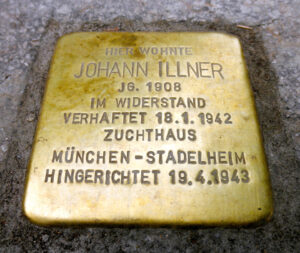 All stumbling stones at Stauffenstraße 10