Artur ZHORSKY, born 1901 in Kaschau (now Kosice / Slovakia), single, after his parents divorced in 1923 moved with his mother to 6 Haydn Str. Salzburg in December 1934.

Admission into the provincial sanatorium because of »seizures«, presumably encephalitis, deported to Hartheim with the 17 April 1941 transport and murdered there. 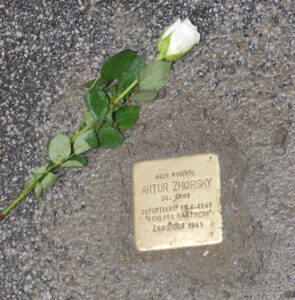 All stumbling stones at Haydnstraße 6