Rudolf PEUKER was born in Salzburg on June 28, 1907. He was the second of the three children of the Catholic couple Marie and Josef PEUKER. They had both come to Salzburg from Austro-Hungarian Bohemia (which is now in the Czech Republic) around 1900, and they settled in Maxglan in 1913. The family had local citizenship rights in Maxglan until it was annexed to the city of Salzburg in 1935 (when their local citizenship was transferred to Salzburg) and they lived at 1 Maxglaner Hauptstraße (which is now 42 Neutorstraße).

Rudolf’s parents both died in the 1930s. His older brother Josef was a mechanic who moved to Germany in 1934.

Rudolf PEUKER was trained as a skilled cabinet maker, but when he was only twenty years old he became a patient in the Salzburg State Asylum in October 1927 and he never married. He was one of the 85 patients who were deported from there to the Hartheim Castle killing center near Linz on May 21, 1941 – where they were all murdered.

As with all the other victims of the Nazis’ secret »T4«1 program, the death of 33 year old Rudolf PEUKER was not recorded in the Salzburg police registration files.

His younger brother Adolf, who had stayed in Salzburg, died here in 1980. 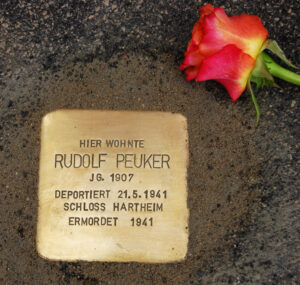 All stumbling stones at Neutorstraße 42