Arthur FÜRST was born in Salzburg on December 25, 1883. He was the oldest of the four children of the Jewish couple Elise (Esther) FÜRST, née Dick, and Rudolf FÜRST.

Arthur’s mother came from the Swabian city of Augsburg, while his father came from Eisenstadt [Kismarton], one of the »Seven Jewish Communities« in the Austrian-Hungarian border region of Burgenland (Hungary before 1921, now Austria).

Arthurs parents Hedwig’s parents ran a wholesale business in Salzburg selling caps and hats, hosiery and fancy goods, first on the Mozartplatz and then at 5 Linzer Gasse where the family also lived. The building belonged to the FÜRST couple since March 1892 (Property Register EZ 565).

After the early death of Rudolf FÜRST in December 1892, his widow Elise was left to run the business at 5 Linzer Gasse while raising her four minor children.
Elise’s younger son Joseph had gone to live in the USA in 1901 when he was just 17 years old: Joe Fuerst soon became a US citizen and worked as a travelling salesman (pipes and smokers articles) who also did business in Europe, so he occasionally visited his family in Salzburg.

The brothers Arthur and Joseph had two sisters:

Martha, the older of the two, married a co-worker at 5 Linzer Gasse, but her husband Josef Stein died at the end of the 1920s and they had no children.

Hedwig, the youngest of the four siblings, married the dental technician David Bisentz.

Their son Rudolf – named after his dead grandfather Rudolf FÜRST – was born in Salzburg on August 13, 1913 in Salzburg. He lived in Salzburg for a few years with his grandmother Elise before joining his parents in Vienna.

The widow Elise FÜRST died in May 1922, having outlived her husband by nearly three decades. The three siblings still in Austria, Arthur, Martha and Hedwig, inherited the building at 5 Linzer Gasse.

The couple lived at 5 Linzer Gasse in Salzburg and their first child Elise (named after her dead grandmother) was born there on November 14, 1924. Their second child Ilse (later called Elsie) followed on December 13, 1928.

The Great Depression hit the FÜRST family business hard and bankruptcy was only avoided by a negotiated settlement in 1933. In addition, Arthur’s wife Irene ran a retail business in leatherwares perfumes and souvenirs in the ground floor shop at 5 Linzer Gasse and helped the family survive the crisis.

Arthur FÜRST – who had been awarded a medal for bravery as a soldier in World War I – was quite active in his Jewish community: he served as a member of the community cultural council and was the chairman of the Chevra Kadisha burial society.

It is also noteworthy that the FÜRST family was one of around 50 Jewish families that possessed a formal legal right of residence – a form of city citizenship – in the city of Salzburg.

Salzburg’s Antisemites were clearly aware of who was Jewish in the city in the 1920s. Their names and addresses were published in »Jewish Lists« that were circulated in »Aryan« shops in Salzburg since 1922 by the »League of Antisemites.«

These circulars promoted a boycott and expulsion of the city’s Jews.

Arthur FÜRST’s widowed sister Martha Stein, who was the leader of the Jewish Women’s Association in Salzburg was evicted from her apartment. Sick with cancer, she found refuge and care in her brother’s house. She died on July 8, 1938 at age 52 and was buried in the Jewish cemetery in the suburb of Aigen. Her gravestone disappeared during the years of terror.

The Jewish family of Ernst, Ida and Herbert LÖWY, who had lived on the third floor of the FÜRST building since 1926, were expelled from Salzburg in November 1938. Their deaths in Auschwitz went unnoticed in Salzburg for decades.

A mob destroyed the Salzburg synagogue and seven »Jewish« shops during the pogrom night of November 9th-10th, 1938 – a set of life-threatening attacks on Jews.

A Jew-hater named Franz Schider who lived at 8 Linzer Gasse, shot a rifle at the house of the FÜRST family across the street from him. A bullet hit the shop window on the ground floor. The shop was also looted.

A disturbing photo shows three passers-by staring at a window display with half-open shutters and a bullet hole. The name of the company founded in 1883 and deleted from the companies’ register in 1938 can also be read in the photo: »Rudolf Fürst«.

Arthur FÜRST, owner of the Rudolf Fürst company, was one of the Salzburg Jews arrested on November 10, 1938. In order to expedite their expulsion and robbery, the Salzburg Gestapo had 26 Jews born between 1883 and 1914, including Arthur FÜRST, deported to the Dachau concentration camp (registered entry on November 12, 1938).

As a result, Arthur and Irene FÜRST had to pack their bags and travel to Vienna along with their daughters – 10-year-old Ilse and 14-year-old Elise – on December 24, 1938, according to the Salzburg police register.

The building at 5 Linzer Gasse was immediately »Aryanized«: a forced sale, entered in the property register of the city of Salzburg (EZ 565) on March 25, 1939 – in the language of the Austrian bureaucracy which gave the theft under the National Socialist regime a legal appearance: »Ownership rights incorporated for Josef Falkensteiner«.

This made the Salzburg merchant Josef Falkensteiner the official owner of the house at 5 Linzer Gasse: henceforth the home of his family.

In Vienna the FÜRST family was able to arrange ship passage to the USA: leaving from Bremerhaven on February 23, 1939 and arriving in New York on March 4th – where they were met by Arthur’s brother »Joe« who supposedly spoke only English.

They found a new home far from New York city in Charleston, South Carolina. There, on December 6, 1939, Arthur FÜRST signed a »Declaration of Intention« for himself and his family to prepare to obtain US citizenship. Initially, the family lived in precarious circumstances with little knowledge of English.

Arthur’s wife Irene had to work hard as a cook and shop clerk to keep herself and her family afloat. The loss of their husband and father soon after the end of the war was painful: Arthur FÜRST died in Charleston on July 27, 1947 at the age of 63.

We do not know whether he received news of the murder of his sister Hedwig BISENTZ in the Theresienstadt concentration camp before his death. In any case, Hedwig’s son Rudolf, who survived the Shoah, knew about it, as he filed inheritance claims.

In 1949 the heirs Irene FÜRST and Rudolf BISENTZ filed an application in the USA for restitution of the house at 5 Linzer Gasse in Salzburg.

It is documented that the property, which had been sold under duress, was not restituted, but that the claims were partly settled in an out-of-court settlement [in a post-war legal process that provided only minimal compensation to the original property owners].

Irene FÜRST died at the age of 101 on September 25, 1998, having outlived her husband Arthur by five decades. The couple’s grave is in the Brith Sholom-Beth Israel Cemetery outside Charleston.

Their daughters Elizabeth (Elise) Kaplan and Elsie (Ilse) Horowitz, who have also died now, have five children living in the USA: Bob and Ron, Sheryl, Burt and Arthur (named after his grandfather Arthur FÜRST). 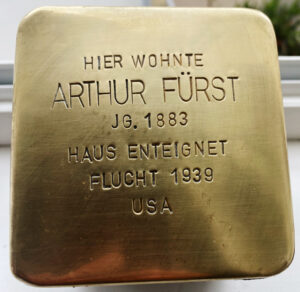 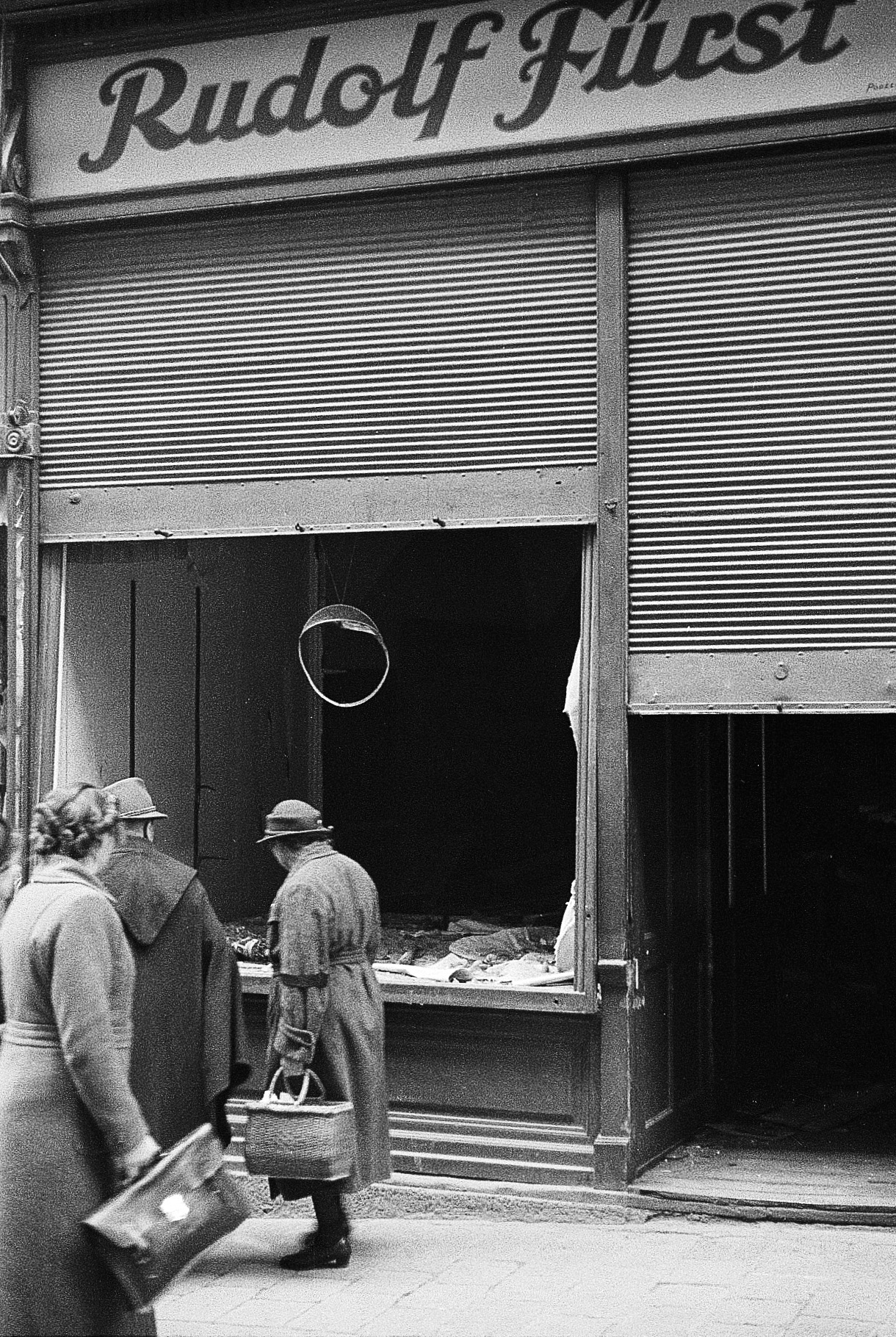 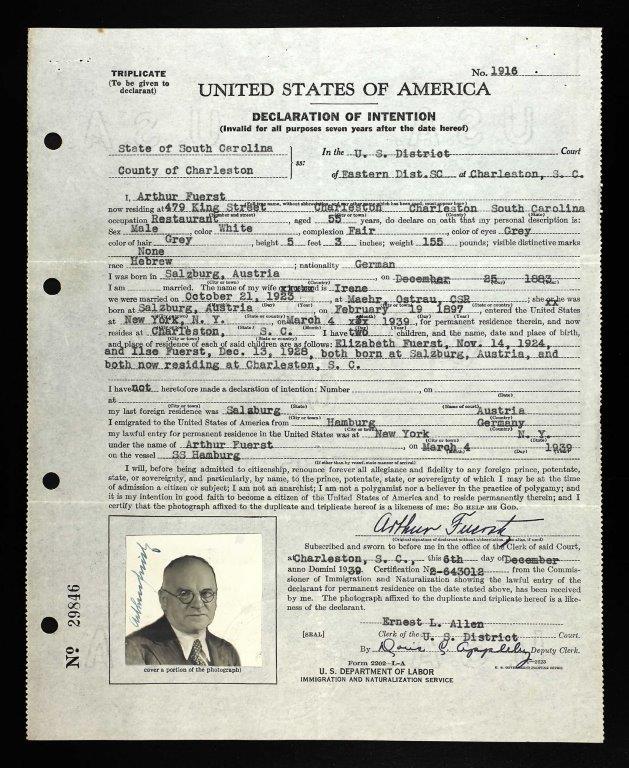 Arthur Fürst‘s Declaration of Intention to apply for US Citizenship 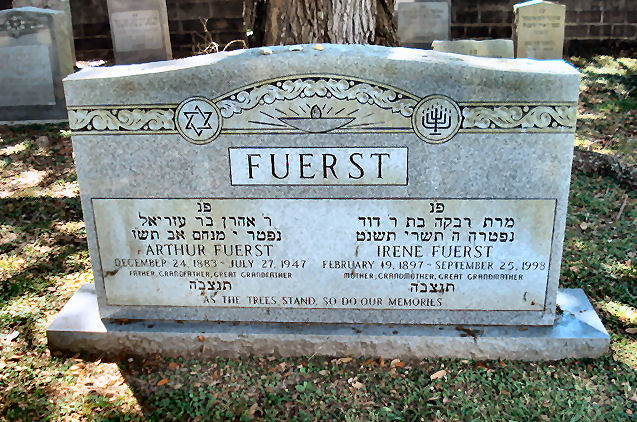