Emil HIRSCH was born in Salzburg on June 23, 1922. He was the only child of the Jewish couple Marie and Hugo Adolf Hirsch, who had lived in Salzburg since June 1916 when it had still been part of the Austro-Hungarian Empire.

Emil’s mother’s maiden name was Obrist and she had come from Switzerland. His father, Hugo, had been born in the Austro-Hungarian Crownland of Bohemia in 1873 and had been a successful businessman with several outlets who had dealt in woolens and military supplies until 1918. The sources are silent as to the economic situation of the business after the small Austrian Republic was all that was left of the former Austro-Hungarian Empire, but few businesses really prospered here after being cut off from former customers and suppliers by the new borders. Nor is anything known about any possible religious functions in the Jewish Community. It is unlikely, however, that the Hirsch family remained unmolested by the growing Antisemitic hostility that pervaded Austria after the war.

The Hirsch family left hardly any visible traces behind in Salzburg. Based on the police registration files we can at least be sure where they lived: they were last renters at 23 Bergheimer Straße in the Elisabeth-Vorstadt district. The official deregistration date is also worthy of note: February 21, 1938. So just a few days after the momentous agreement of Berchtesgaden and Hitler’s ultimatum – and three weeks before the annexation of Austria to Nazi Germany – the Hirsch family left their exposed residence near to the German border without any public notice.

According to the official deregistration the Hirsch family with the then 15 year old Emil moved to the C. S. R. [Czechoslovakia], presumably to join paternal relatives in Karlsbad [Karlovy Vary] or Prague [Praha]. Freedom and security there lasted only a short time before Germany took over the Sudetenland in October 1938 and occupied the rest in March 1939.

The broken lives of the Hirsch family have been consigned to darkness, their son Emil was born in Salzburg in 1922, but while his birth had to be registered in the birth register of the Salzburg Jewish Community according to Austrian law that can’t be verified because the Jewish birth and death register was confiscated by the Nazi regime: robbed books and stolen identities of the Jewish victims from Salzburg.

Our research in the local citizen registry of the city of Salzburg has uncovered nothing further because the family Hirsch, as noted on their registration form, possessed their local citizenship rights in the Bohemian community Kosslau [Kozlov] in the district Luditz [Žlutice] and not in Salzburg. Kosslau was birthplace and hometown of the family father Hugo and under Austro-Hungarian law it was therefore the place where the family had local citizenship rights – and since 1918 it had become part of the new country of Czechoslovakia. It can therefore be assumed that the Hirsch family had Czechoslovakian citizenship, which also explained their move to Czechoslovakia in 1938.

According to the Austrian Victims’ Benefits Act, which was adopted after the liberation in 1947, Austrian citizenship and a regular residence in Austria were among the conditions for a claim for victims’ compensation: thereby creating a legal discrimination against and exclusion of all Shoah survivors and survivors who lived in exile, The lack of victims’ compensation records leaves researchers in the dark. It should be remembered that Emil HIRSCH is one of the 192 Jewish children born in Salzburg from 1867 to 1938, and that only two survivors with Austrian citizenship returned from exile to Salzburg. Emil HIRSCH was one of the many Jews born in Salzburg who remained uncounted among the Salzburg victims for eight decades because of the lack of Austrian sources.

Czech sources indicate that on July 16, 1942 the 20 year old Emil HIRSCH was deported from Prague (Praha), the capital of the so-called »Protectorate of Bohemia and Moravia« under German rule, to the Theresienstadt concentration camp — and from there on September 28, 1944 to Auschwitz. Further research indicates that on January 24, 1945 Emil HIRSCH was liberated by Soviet troops in Gleiwitz – either from an external camp associated with Auschwitz or from an SS evacuation and death march from Auschwitz to Mauthausen or Dachau – »osvobozeni se dozili« [liberated they lived].

But the Czech sources don’t tell us if the 22 year old Emil HIRSCH from Salzburg long survived the consequences of his imprisonment [many liberated prisoners died soon afterwards from their injuries] or if his parents, whose names are not on the deportation lists, survived the terror years.

In March 2019 we received a message from the Czech Republic. Ms. Martina Heranová informed us that Emil’s parents, Marie and Hugo Hirsch had not survived the Shoah and that after his liberation from Auschwitz Emil lived in Karlovy Vary. He changed his family name from Hirsch to Heran and got married. Emil and Anna Heran had a son named Petr in 1949, and got two grandchildren later, Martina in 1977 and Robert in 1978. We have now learned that Emil Heran visited Salzburg in 1966 along with his then teenaged son Petr – two decades after its liberation form the Nazis. In 1985 Emil died in Karlovy Vary at age 63. We heartily thank his granddaughter Martina Heranová for providing us with this information and for her permission to publish these family photos. 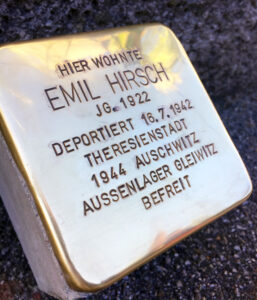 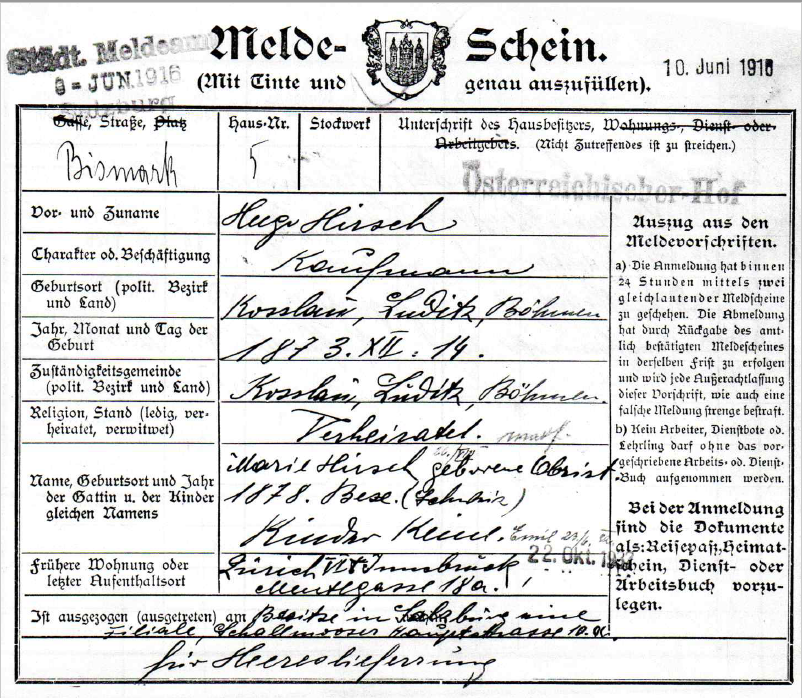 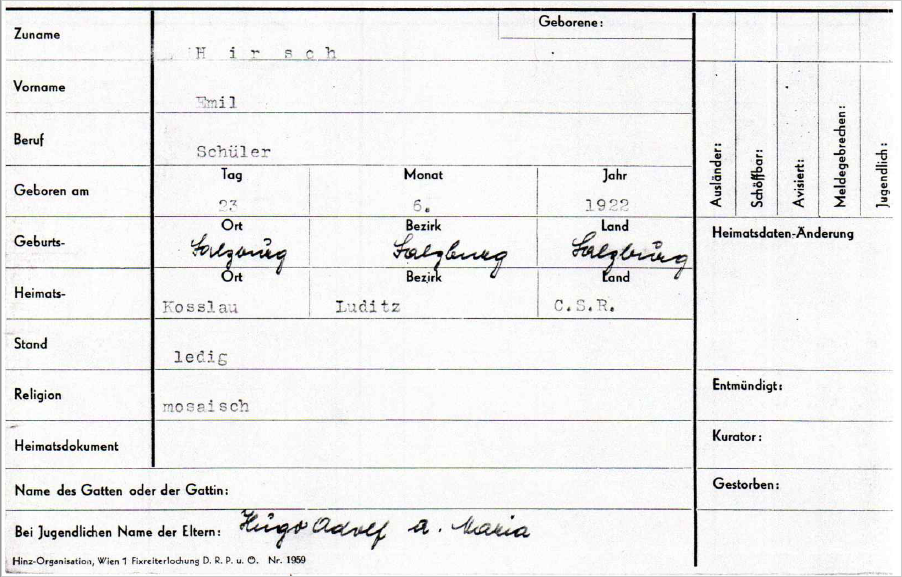 Back side of the Registration certificate 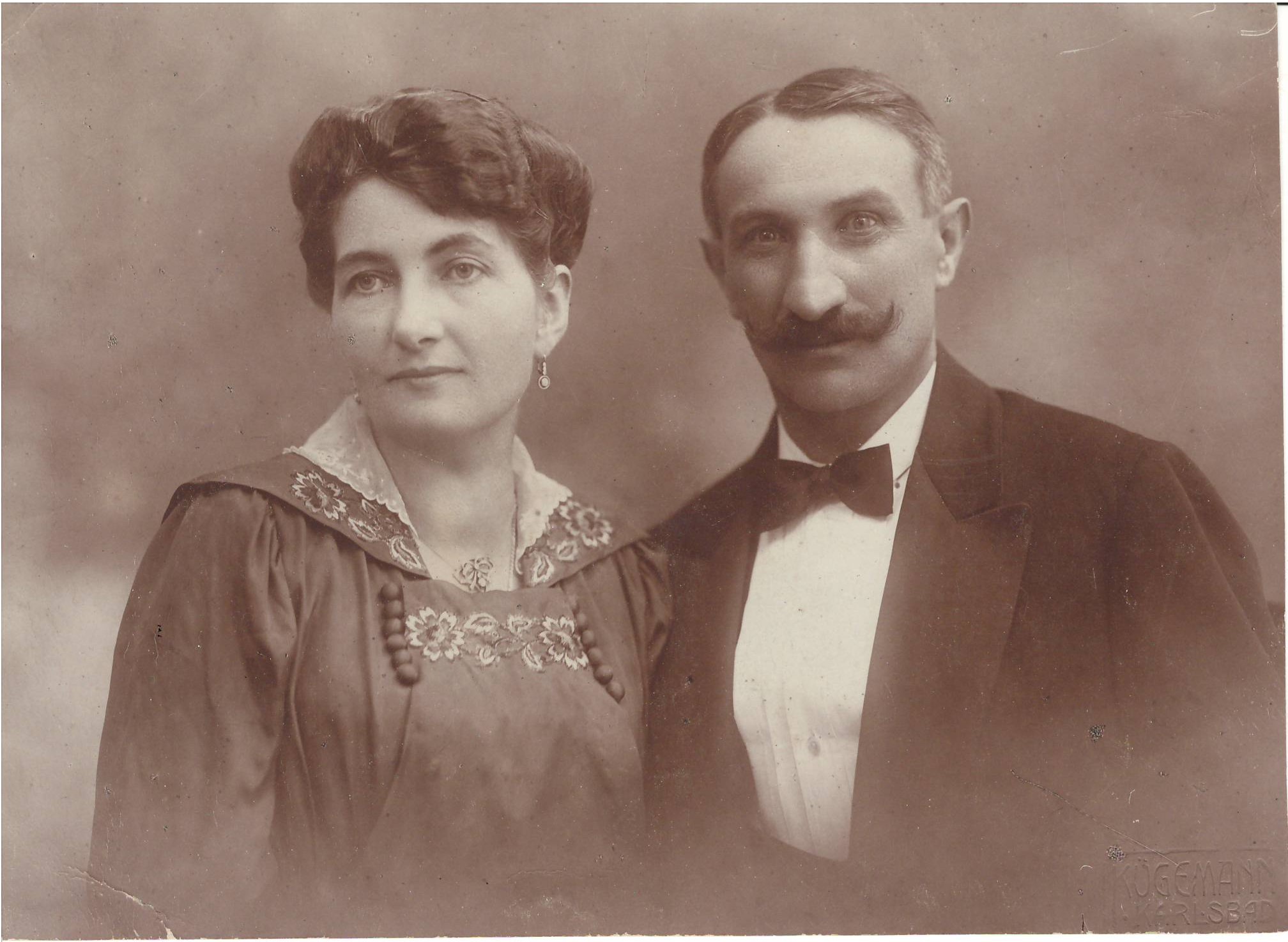 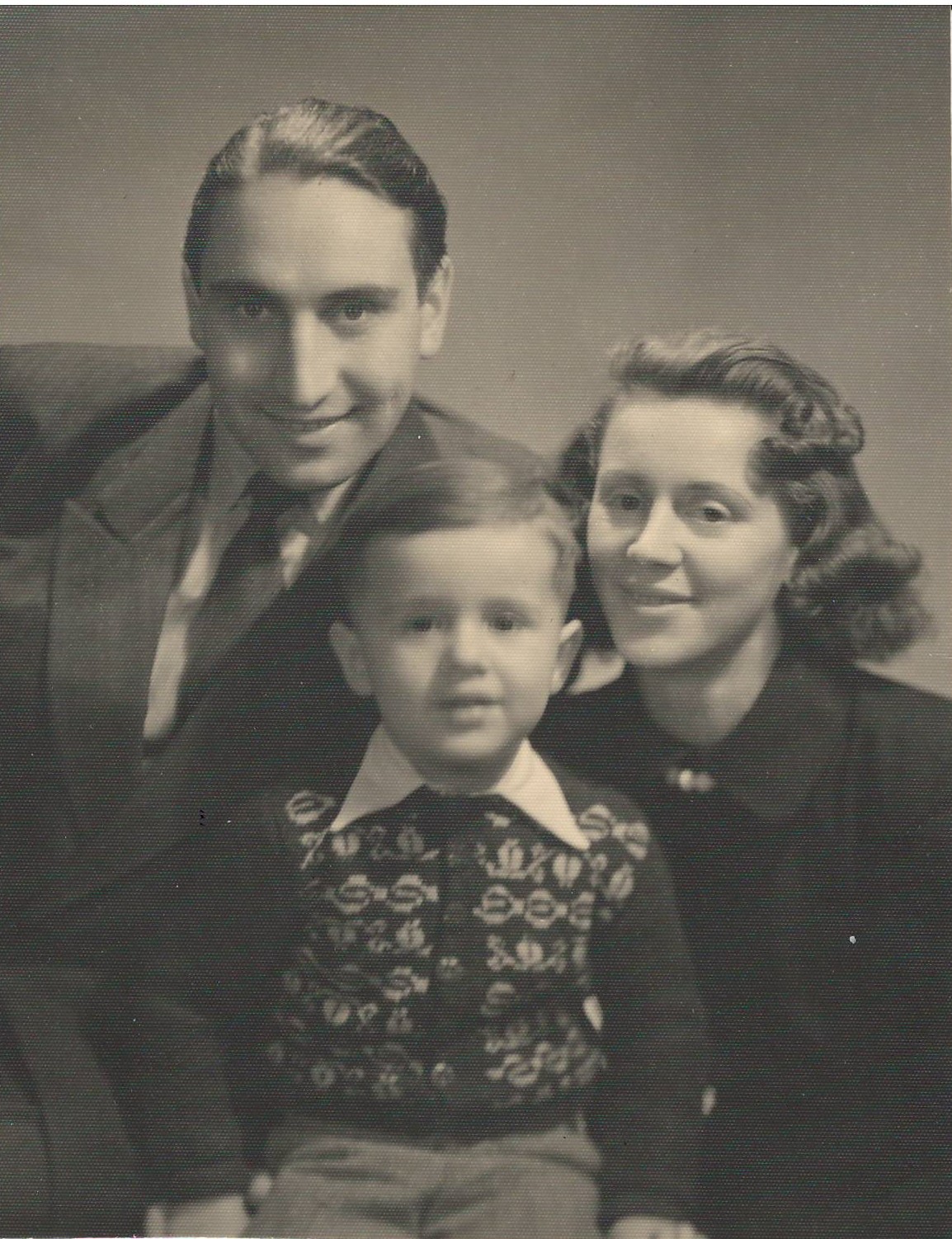 All stumbling stones at Bergheimer Straße 23