Friedrich (Siegfried) BUXBAUM, was born in the Habsburg Imperial capital of Vienna on September 23, 1869.

He was the child of the Jewish couple Rosa Buxbaum, neé Wilhartitz, and Max Buxbaum, a businessman from Bohemia in the Austro-Hungarian Empire (now part of the Czech Republic).

Friedrich BUXBAUM married the Jewish woman Katharina Schostal on June 30, 1901 in the Vienna City Temple [Stadttempel]. Their son Erich was born in Vienna on August 17, 1902 and was registered with the official Vienna Jewish Community organization, the Israelitischen Kultusgemeinde Wien. The next year, in 1903, the family BUXBAUM converted to Roman Catholicism (baptized in St. Stephan’s on February 24, 1903).

Friedrich BUXBAUM’s musical career is also well documented: first Cellist at the Vienna Court Opera and the Vienna Philharmonic, Professor at the Vienna Conservatory and the Music Academy, and member of the Fitzner- and Rosé-Quartet.

BUXBAUM performed as the cellist with the Rosé-Quartet at the Salzburg Festival twice, the last time on August 30, 1936 with Alma ROSÈ on violin.

In March 1938 – even before the Nuremberg Racial Laws were imposed in Austria – the 68 year old Friedrich BUXBAUM was expelled from the orchestras of the Vienna State Opera (as the Vienna Court Opera was renamed in 1921) and the Vienna Philharmonic.

The BUXBAUM family managed to flee to London in the fall of 1938. There they found themselves faced with severe financial difficulties, but were rescued by Alma Rosé. Her plan to revive the Rosé-Quartet with her father Arnold and Friedrich Buxbaum in exile in London was realized in 1939.

During the war the Rosé-Quartet performed regularly (though without Alma Rosé) in the National Gallery and Wigmore Hall – the latter performance was a celebration of the 100th year anniversary of the Vienna Philharmonic and the 80th birthday of Arnold Rosé in exile.

In September 1947, after the Second World War was over and Austria was liberated, the Vienna Philharmonic Orchestra performed in London once more.

On this occasion the expelled Philharmonic musician Friedrich BUXBAUM greeted his colleagues from Vienna with the ironic words:

Dear friends, I’m so happy that I can be with you again. I have heard you play. It sounded wonderfully pure [rein] – that is entirely purified of Jews [ganz judenrein]. 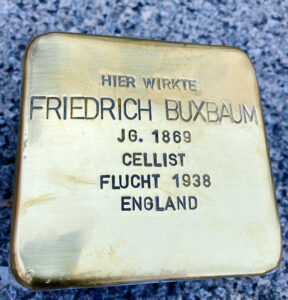 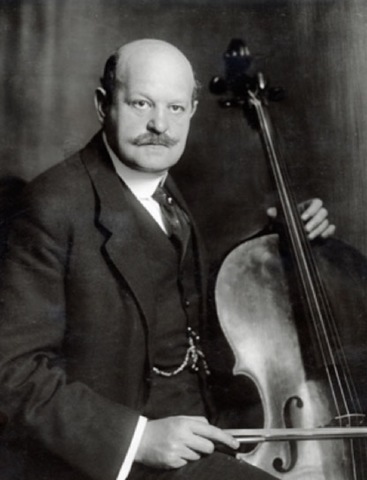