Helene THIMIG was born in Vienna on June 5, 1889 and was baptized in the city’s Lutheran Stadtkirche. She was the first of the four children of Fanny Thimig neé Hummel and Hugo Thimig.

Her father was an actor and director, and for a while also the director of Vienna’s leading theater, the Burgtheater. His children Helene, Hermann and Hans took up the same profession. They were a legendary Viennese theater family, well connected with the theater impresario Max REINHARDT in Berlin, Salzburg and Vienna.

During the First World War REINHARDT engaged the young Helene THIMIG in his German Theater in Berlin. This began an intimate partnership that went beyond artistic collaboration and lasted for a quarter of a century through all political disturbances.

Helene THIMIG’s roles in the Salzburg Jedermann were personifications of the Christian faith who act as companions for a rich sinner who ultimately finds faith and is saved by the grace of God – presented in Max REINHARDTS original production in front of the baroque facade of the cathedral where the figure »Salvator Mundi« (Christ as Savior or Savior of the World) rises from the pediment.

It is sobering to note that Helene THIMIG was involved in eleven pieces in the festival summers from 1920 to 1937 and played the title roles in Turandot, Iphigenia in Tauris and Stella. She received the best reviews for her favorite roles as »Iphigenia« and »Stella«:

Viennese critics did not forget to mention that one or the other festival performance was a Max REINHARDT production from Vienna’s Theater in der Josefstadt. The Wiener Theater, which REINHARDT opened as director in April 1924 with Goldoni’s The Servant of Two Gentlemen, had soon become known as the »Thimig-Theater« because of the prominence and popularity of the Viennese theater family.

REINHARDT’s staging of the Italian comedy, The Servant of Two Gentlemen, in what was then an uncovered riding school was a risk. It was exposed to the weather, but it was nevertheless a great success thanks to the performances of Helene THIMIG as »Smeraldina«, with her father Hugo as »Pantalone«, and her brothers Hermann and Hans as »Truffaldino« and »Florindo« – the best of the Viennese »Thimig-Theater« at the Salzburg Festival in 1926.

Salzburg presented itself to the world as a unique showplace for the Baroque world of God. Hugo von Hofmannsthal re-worked Calderon’s 1634 mystery play Das große Welttheater [The Great Theater of the World] and gave it a revised title as Das Salzburger große Welttheater [The Salzburg Great World Theater]. On August 13, 1922 it had its premiere in Salzburg’s Baroque University Church, which had been designed by the famous Austrian architect Fischer von Erlach and had been completed in 1707.

REINHARDT staged Hofmannsthal’s mystery play with God personified in te role of »Master«. Helene THIMIG played the role of »Wisdom« for the first time in the 1922 Summer Festival, again for the celebratory opening of the Festival Theater on August 13, 1925 and for a last time in 1933 in a Berlin newly designated as the capital of the Third Reich shortly after Adolf Hitler took power.

Hofmannsthal’s Das große Welttheater (without the »Salzburger« prefix) was REINHARDT’s last production at the German Theater in Berlin – and the German Parliament building, the Berlin Reichstag, burned down during the play’s dress rehearsal for a spooky background. It premiered on March 1, 1933 with words of the poet Hugo von Hofmannsthal spoken on the Berlin stage that had a seriously threatening meaning in real life:

You, who have the role of the king, resign! Your part is played! Get off the stage!

REINHARDT had to leave both his theater and Berlin in March 1933, and Helene THIMIG with him. In Salzburg, alongside her usual performance as »Belief« in Jedermann she also played the role of »Evil Spirit« in Goethe’s Faust, a performance that was only casually mentioned in the reviews because all eyes were on the younger Paula Wessely playing the lead role as »Gretchen«.

The old archbishop’s rock Felsenreitschule [riding school] with its triple loggias carved into the stone offered a setting that is unlikely to be found in any other city. … This »Faust« performance forms a memorable point in the development of the Salzburg Festival.
This performance of »Faust« reaches a summit, not just within the Salzburg atmosphere, but an unattainably high summit in the art of German and European theater. f. s.
Neue Freie Presse, August 18, 1933, p. 6

During the summer Festivals, REINHARDTS Schloss Leopoldskron residence served as a grandstand for sophisticated circles. His divorce fights with his first wife took place far away from Salzburg, but when they finally ended in June 1935 when he was 61 years old he married his 46 year old love Helene THIMIG in Reno (Nevada) when she was on a US tour.

In retrospect we know that Helene and Max REINHARDT enjoyed their last Summer Festival together in 1937. On October 5, 1937 the couple celebrated with Franz Werfel the premiere of his play In einer Nacht [During One Night] in the Theater in der Josefstadt.

Helene THIMIG was still performing in Vienna until the end of October, then she hurried to Le Havre and traveled to New York on the Normandy transatlantic liner, where she was greeted by her husband on November 8, 1937.

THIMIG and REINHARDT became US citizens in November 1940. They had only three years to enjoy that as a couple however as Max REINHARDT died at age 70 on October 31, 1943.

His wife Helene THIMIG had been a star in Austria, but she only managed to make a small career in Hollywood after her move to the US. She was only able to play minor roles in Hollywood films, mostly as German women. For example she played »Frau Anders« in Fred Zinnemann’s Film The Seventh Cross (1944), which was a film adaptation of Anna Seghers [Anna (Netty) Radványi, neé Reiling]’s antifascist novel Das siebte Kreuz from 1939.

In the festival city of Salzburg, liberated by US troops on May 4, 1945, anti-fascist resistance was not high on the agenda. What was high on the agenda was rather the revival of the old glory days before the year of violence when the Nazis took over in 1938.

The American occupation’s Information Services Branch (ISB) theater and music department was largely responsible for restoring Salzburg to cultural prominence. This project was led by Dr. Ernst Lothar [born Lothar Ernst Müller] – Max REINHARDT’s successor as director of the Theater in der Josefstadt who had also gone into American exile and become a US citizen before returning to Austria as a US Army 1st Lieutenant and ISB cultural officer.

It was Dr. Lothar who arranged Helene THIMIG’s return from the US and what the Wiener Kurier called her »triumphal return« reception at the Salzburg Hauptbahnhof RR Station on July 31, 1946 [August 1, 1946, p. 8] – as a prelude to the Salzburg Festival.

It was a homage that is usually only given to a queen: a crowd of people, politicians, friends, admirers and reporters, microphones, cameras and searchlights that flared up with the arrival of Helene (who was presented neither as Jewish nor as politically persecuted) and Dr. Lothar – who welcomed the smiling widow as the legitimate heiress and bearer of Max REINHARDT’s international ideas and directorial style. In conclusion, he said:

We are happy that you are here. And Max Reinhardt returns with you.

Max REINHARDT died as an expelled Jew in exile who had been robbed in Salzburg. But nobody said that in public. Thanks to U.S. cultural officer Dr. Lothar Jedermann returned to Salzburg after having been exiled for seven years—and along with it its dead producer also returned as a myth.

Helene THIMIG’s appearance as »Belief« in front of the facade of the cathedral, on the gable of which Christ rises as the Redeemer of the world, must have been adorable when Zeno von Liebl wrote in the Viennese courier:

… As if dark clouds were never over this city, yesterday shone the silk tent of a blue sky (…).
The big moment of the performance was the renewed encounter with Helene Thimig. It was as if the evil and, the sadness of the past, were burned away, burned away by the infinitely pure, chaste and bright flame of her being.
Wiener Kurier, August 5, 1946, p. 4

It seems that Helene THIMIG, as a nun-like woman with a clear conscience, was able to work the miracle of relieving the festival city from the evil spirit of the recent past, at least for the duration of the play.

For eleven Summer Festivals Helene THIMIG supervised Jedermann as a director in REINHARDT’s spirit. Even in her memoirs, she wrote primarily about her late husband:

Helene THIMIG played on the stage until she was 85 years old and died in Vienna with numerous awards and highly revered on November 7, 1974.

In Vienna, Helene THIMIG is remembered with a street named after her but her name does not exist in any of the public spaces of the city of Salzburg’s Festival. 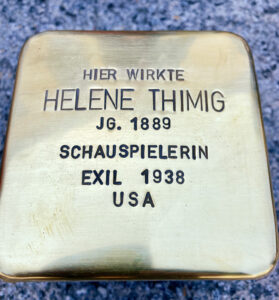 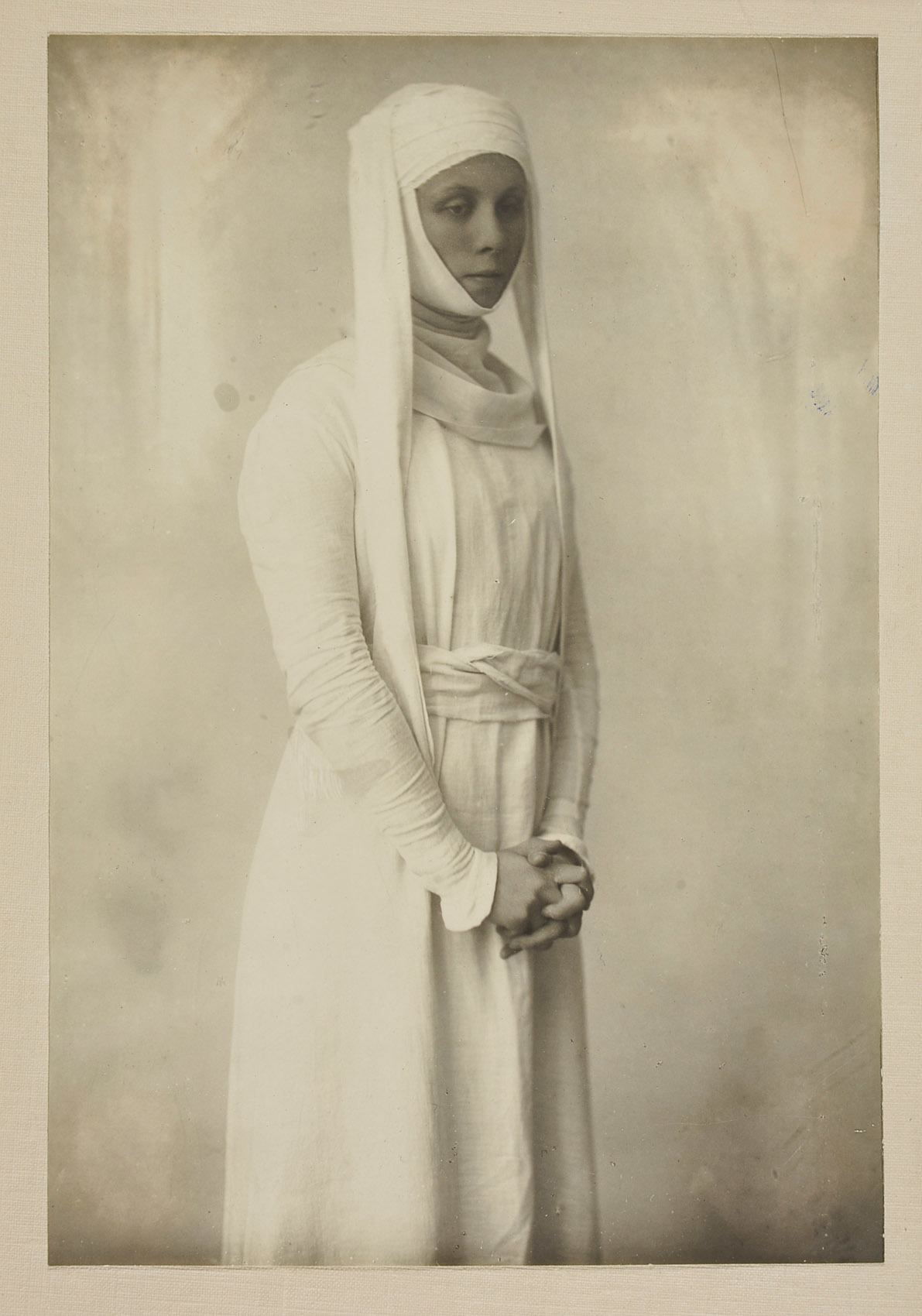 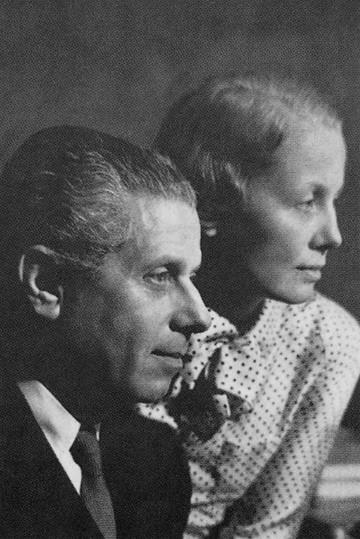