Henriette FLEISCHMANN was born in Vienna on February 4, 1875. She was a daughter of the Jewish couple Mathilde FLEISCHMANN, née Bassel, and Moritz FLEISCHMANN, a stockbroker in Vienna. In February 1898 Henriette FLEISCHMANN married a ministerial official named Julius FLEISCHMANN in Vienna’s main synagogue, the Wiener Stadttempel. Henriette and Julius had two daughters, Elisabeth who was born on November 15, 1898, and Helene who was born on February 27, 1906. Both daughters were registered with the Vienna Jewish Community Organization. But in 1918 Ministerial Counselor Julius FLEISCHMANN and his wife Henriette converted to Catholicism and married again in the Catholic parish of St. John of Nepomuk in Vienna’s Leopoldstadt [sometimes called the Matzo Island because of its large Jewish population]. In the following years their daughters also underwent Catholic conversions and both of them married non-Jewish men.

Under the Nazi regime the FLEISCHMANNs and their daughters were hit by the Nuremberg racial laws. The Vienna registration files report that retired Ministerial Counselor Julius FLEISCHMANN, who had been born in Prerau, Moravia (now Prerov in the Czech Republic) on March 3, 1870, died on September 12, 1942 – presumably a suicide (his name is included in the Shoah databank, but without and birth or death dates. The widowed Henriette FLEISCHMANN suffered another blow in Vienna when her daughter Elisabeth Mnestian was deported from her home in Eisenstadt to the Theresienstadt concentration camp on October 9, 1942. On October 12, 1944 Elisabeth Mnestian was sent from Theresienstadt to Auschwitz where she was murdered. Henriette FLEISCHMANN’s half-sister Ida Kohn was also among the victims of the Holocaust – she was probably murdered in the Treblinka death camp in the fall of 1942.

The widow Henriette FLEISCHMANN, who was counted as a »full Jew« under the Nuremberg racial laws, lived officially at Wurzingergasse 10/2/8 in Vienna’s 18th district until December 29, 1942– and then »address unknown« according to the Vienna registration files. Research has revealed that she was able to find shelter in Salzburg with the help of her younger daughter Helene and her non-Jewish son-in-law Otto Karl Schwarz. The 67 year old Henriette FLEISCHMANN couldn’t register in her refuge without facing deportation (Salzburg was officially »Jew free« by then) and she lived in fear hidden under the surface as a so-called »submarine«. When the psychologically stressed woman thought she had been discovered by the Gestapo she committed suicide. The official record only says that she died in the Salzburg State Hospital on March 31, 1943. All the other information came from her survivors, who had her body cremated in Salzburg and had the urn with her ashes set in a small Catholic cemetery in Lower Austria – an odd procedure, but one that was warranted.

It shows that the racist persecution didn’t end with the death of this woman. Her Salzburg son-in-law failed to provide the authorities with the deceased’s documents on several occasions, and thus succeeded in covering up the ancestry of his mother-in-law. That was necessary to protect his wife Helene, who also lived in Salzburg and was registered here as a Catholic – if the authorities had learned about here Jewish parents she would have been arrested and sent to a concentration camp (or a death camp). Otto Karl Schwarz, who neither left nor betrayed his wife, would have been sent to a forced labor camp along with other husbands who were marked as »Jew related« under the Nuremberg racial laws. The endangered couple went by the name »Goodall« and lived irregularly at 8 Kaigasse and other locations in Salzburg. They survived the terror years together, but separated after the liberation. Helene stayed in Salzburg and died here in 1988. 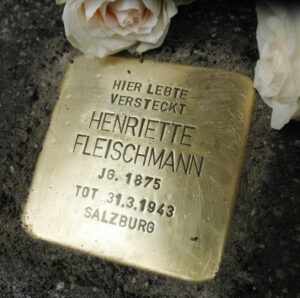 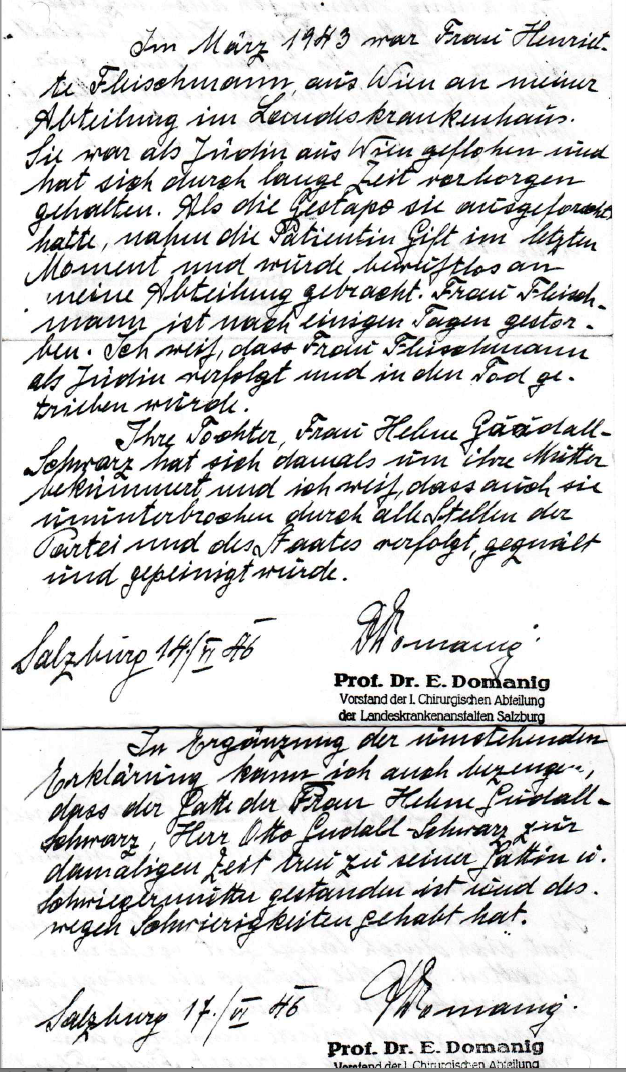 Explanatation of Dr. Erwin Domanig to the death of Henriette Fleischmann 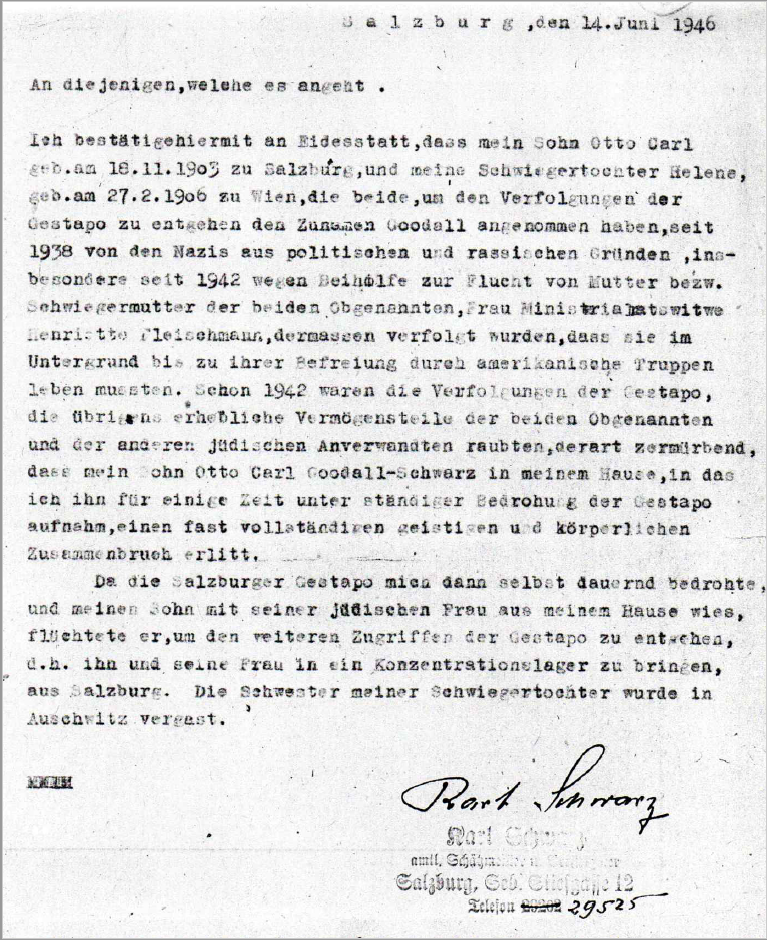 All stumbling stones at Kaigasse 8