Nikolaus FRAUNHOFER was born in Graz in 1914. He was a journeyman blacksmith who had lived with his mother in Itzling [now part of the city of Salzburg, but then part of a separate entity] since 1929. He was a member of the Jehovah’s Witness church, and had already been persecuted by the Austro-Fascist dictatorship when he was subjected to twelve hours under arrest for circulating prohibited publications in June 1936.

As a result of his being already known to the police for his Jehovah’ Witness activism Nikolaus FRAUNHOFER was arrested by the Gestapo on December 5, 1938. After being transferred from Salzburg to Munich and then back to Salzburg, he was deported to the Sachsenhausen concentration camp on February 19, 1940. He was murdered there on June 22, 1940. After the war his mother received a pension for the survivors of victims until her death in Salzburg in 1959. 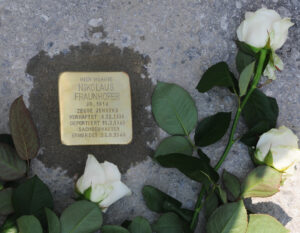 All stumbling stones at Theodebertstraße 24