Josef GÖTZENBERGER was born in Salzburg on March 27, 1896 and was the son of the Catholic couple Karoline and Josef Götzenberger. His father operated a trade agency and owned a house in Salzburg’s Schallmoos district before his death in 1934. Josef Jr. was also a successful businessman who ran a book and newspaper shop. He was married, with one son, and lived with his family in the house he owned at 30 Schallmooser Hauptstraße 30.1 Josef GÖTZENBERGER was active in Austria’s Christian-Social Party and belonged to its Catholic conservative social milieu.

GÖTZENBERGER had no political problems under the Nazi regime at first. His son Herbert, who had been born in 1922, was drafted into the Labor Service in 1940 and then into the army in 1941. On August 1, 1942 Herbert was killed fighting on the Eastern Front (in the Soviet Union). In the following year Josef GÖTZENBERGER had to close his shop. He found it hard to accept these blows of fate and had to be hospitalized for a while. After his release he was unable to continue to remain quiet about the Nazi regime. His anti-regime comments – »undermining the military« – brought him into the clutches of the Gestapo and he was arrested on February 16, 1945. He was severely beaten and was taken from the police jail to the prison hospital.

The 49 year old Josef GÖTZENBERGER died from the effects of his mistreatment on October 9, 1945 in the Salzburg State Hospital. Later, in liberated Austria, he was recognized as a »victim in the fight for a free, democratic Austria« and his widow Margarethe was entitled to victims’ compensation. She died in Salzburg at age 73 in 1975.

1 Josef GÖTZENBERGER was also co-owner of the house at 35 Linzer Gasse. Since April 2013 a Stumbling Block has been in front of that house for Isabella MAYR, a 37 year old handicapped woman who was murdered in the Hartheim killing center. 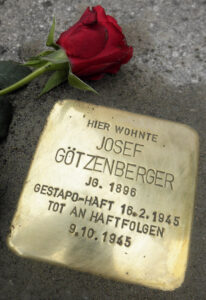 All stumbling stones at Schallmooser Hauptstraße 30