Maria FISCHER was born in Salzburg on January 22, 1885 and was the second of the six children of the Catholic couple Maria and Peter FISCHER. The family had local citizenship rights in Salzburg and ran a small grocery.

After the early death of the parents only the two unmarried sisters Maria and Paula remained in Salzburg as shop assistants. They continued to live where they had lived since they were born, on the second floor of 5 Paris-Lodron-Straße.

Maria FISCHER was committed to psychiatric care several times and she was one of the 85 patients who were deported from the Salzburg State Asylum to the Hartheim Castle killing center near Linz on May 21, 1941 — where they were all murdered.

As with all the other victims of the Nazis’ secret »T4«1 program, the death of 56 year old Maria FISCHER was not recorded in the Salzburg police registration files. Her sister Paula died in Salzburg at age 86. 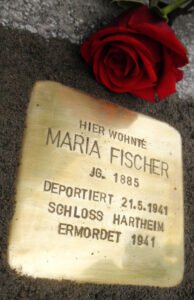 All stumbling stones at Paris-Lodron-Straße 5