Leo KÖHLER, was born in Salzburg on August 5, 1897 as the only child of the Jewish couple Max and Hermine KÖHLER (originally KOHN)1, who operated a highly regarded tailoring shop at 5 Dreifaltigkeitsgasse. The KÖHLER family had full citizenship rights in the city of Salzburg under the old Austrian Heimatrecht Laws. Leo was a skilled tailor and businessman who married a Vienna Jew named Martha WERNER in 1922. On August 11, 1923 she gave birth to their daughter Gertrude in Salzburg.

Leo and his father Max KÖHLER were both members of the Salzburg Jewish Community’s board of directors.

Leo KÖHLER was one of the 26 Salzburg Jews who were arrested by the Gestapo during the »Reichskristallnacht« pogrom on the 9th and 10th of November 1938. They were deported to the Dachau concentration camp and were only released after they signed documents agreeing to the »aryanization« [a form of legalized theft] of their property and promising to leave the Third Reich.2 Upon his release on November 20th Leo KÖHLER went to Vienna where his parents and family were waiting for him. There their ways parted. It seems that Leo managed to get a visa to allow him and his wife and child to go to Great Britain. We know that Leo’s wife Martha traveled to Britain with their daughter Gertrude in January 1939 and that later they were able to emigrate to the US. But Leo KÖHLER didn’t want to leave his endangered parents alone in Vienna, so he fled with them to Italy – living first in Meran and later in Bologna.

After the German occupation of northern and central Italy Leo KÖHLER was interned in a German police transit camp in Fossoli, and in the Spring of 1944 he was shipped from there to either Bergen-Belsen or Auschwitz. Further details as to his fate are unknown as the Germans destroyed all their records before retreating from Fossoli. What is known is that Leo KÖHLER didn’t survive.

Leo’s father Max KÖHLER died in Bologna at age 80 on January 12, 1947. His mother Hermine KÖHLER then moved to London, where she died in 1959. Their confiscated property in Salzburg at 5 Dreifaltigkeitsgasse was never returned to them, but in accordance with a judicial decision the widow received a partial payment. Leo’s wife Martha died in Tustin, California in 1974. Their Salzburg born daughter Gertrude got married in 1950 and lived with her family in Tustin, California until she died there in 2012.

1 Max Kohn (who changed his name to Köhler in 1910) was born in Lackenbach, Burgenland [then in Hungary but part of Austria since 1919] on March 6, 1867 and was a master tailor. Hermine Kohn/Köhler, née Feiglstock-Feri, was born in Vienna on December 4, 1876. They were married in Vienna on January 5, 1896 (Vienna Jewish Association/Israelitische Kultusgemeinde) 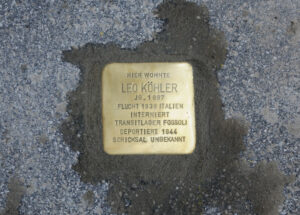 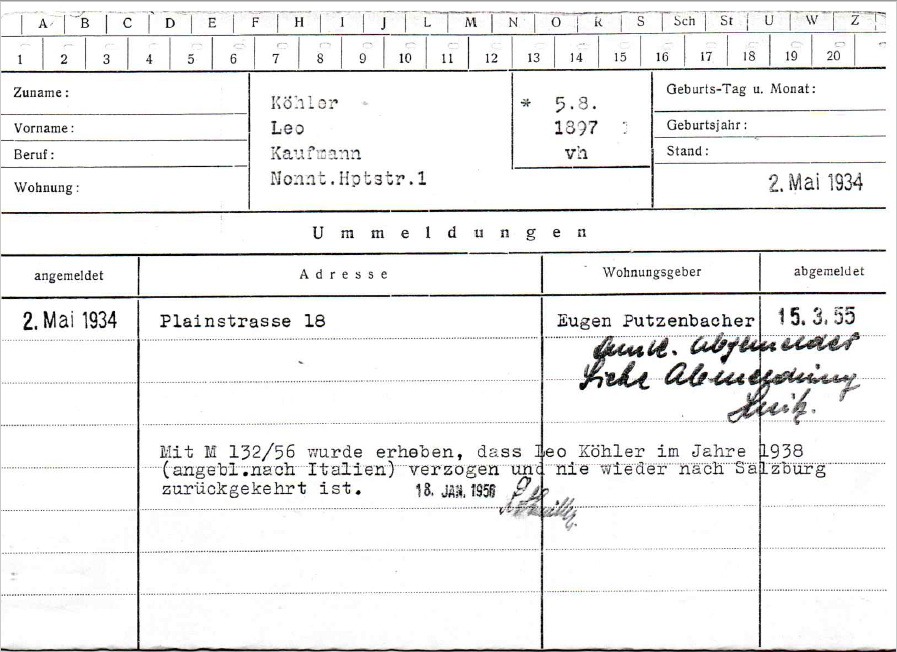 All stumbling stones at Plainstraße 18