Arthur BONDY was born on February 16, 1877 in Vienna. He was the third of the seven children of the Jewish couple Berta Bondy, née Donath, and Josef Bondy. Josef Bondy died in 1898, while Berta lived until 1923 and both were buried in the Jewish section of the Vienna Central Cemetery (Tor I, Grab 20/11/69). Arthur began to work for an insurance agency in Salzburg in 1906 and gradually worked his way up to insurance director.

He got married in Brno (then in Austria-Hungary, now in the Czech Republic) to Irma Kessler (also Jewish) who had been born there on February 25, 1887. On May 1, 1914 their daughter Melitta Gertrude was born in Brno. After the collapse of the Austro-Hungarian monarchy at the end of WWI the BONDY family moved to Salzburg and settled in the Riedenburg neighborhood. In December 1922 Arthur and Irma Bondy bought the house at 20 Neutorstrasse, a Villa where Arthur’s oldest brother Otto had lived for a while. Otto BONDY had been born in Vienna on September 5, 1873 and was a businessman in Vienna and Salzburg. The Jewish widow Rachel ROSENMANN also lived in the Villa BONDY and was a Shoah victim.

After the Nazis took over Austria Arthur and Irma BONDY were expelled from Salzburg. In May 1939 they took up residence at 7 Lugeck in Vienna’s 1st district. But on November 28, 1941 they were among the 999 victims deported in Transport Nr. 12 from the Aspang RR Station to the Byelorussian capital Minsk in the occupied Soviet Union. The Germans made Minsk an administrative center for their »Reichskommissariats Ostland« and it had a large ghetto and nearby killing site for Jews.

Arthur BONDY was 64 years old when they were murdered and his wife Irma was 54. Arthur’s brother Otto BONDY was deported from Vienna to the Theresienstadt concentration camp on July 14, 1942. On September 21, 1942 he was sent on to the Treblinka Extermination Camp and murdered at age 69. Their younger siblings Ernst, Gustav and Leonie were also victims along with their families. So far we have been unable to determine just what happened to Irma BONDY’s siblings.

But we do know that Irma and Arthur BONDY’s daughter Melitta Gertrude was able to flee to England in 1939. She married there and died in London as Melitta Gertrude Weitz in 2001 when she was 87 years old.

The house at 20 Neutorstrasse was »aryanized« by the Salzburg attorney Dr. Julius Bernhold in 1939. After the liberation of Austria in 1945 Villa BONDY was not restored to the Bondy heirs, but after a drawn out legal process there was a court settlement in 1951 that gave the heirs a minimal compensation. 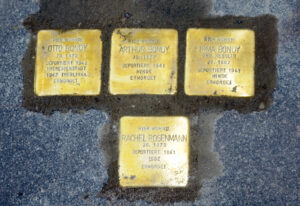 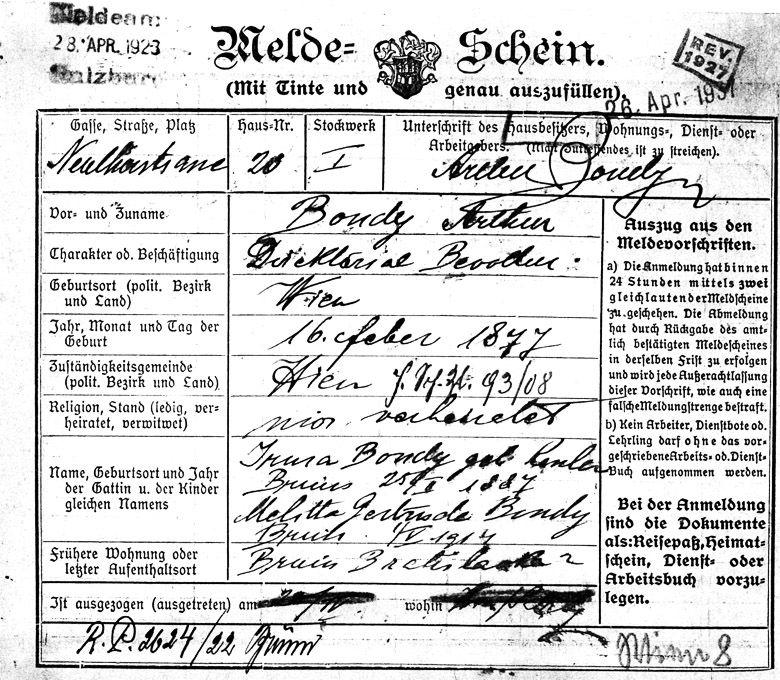