Ignaz DUDA was born in Maxglan (which was annexed to the city of Salzburg in 1935) on February 6, 1899 and was the only child of the Catholic couple Elise and Alois DUDA. Alois was a cabinet maker who died in 1928. Ignaz learned his father’s trade and remained single, living with his widowed mother who became his legal guardian when he was declared legally incompetent.

On April 25, 1939, under the Nazi regime, the then 40 year old Ignaz DUDA was admitted to the Salzburg State Asylum. He was one of the 82 patients deported from there to the Hartheim Castle killing center near Linz on April 17, 1941 — where they were all murdered. As with all the other victims of the Nazis’ secret »T4«1 program, the death of 42 year old Ignaz DUDA was not recorded in the Salzburg police registration files. After the liberation of Salzburg in 1945 his mother moved to Vienna — where she died at age 71. 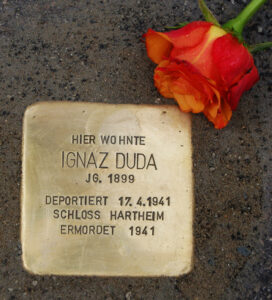 All stumbling stones at Josef-Schwer-Gasse 5