Friedrich Josef TANNENBERGER was born in Vienna on February 10, 1897 and was baptized in the Roman Catholic Church. He was the younger of two sons of Emanuel TANNENBERGER and his wife Georgine, née Bannholzer. Emanuel was a notary with offices at 6 Heumühlgasse in Vienna’s 4th District and his younger son Friedrich Josef who never married maintained his residence there. Friedrich Josef graduated high school graduate, served as a decorated Lieutenant in the Austro-Hungarian army in the First World War, and then studied singing and acting.

Fritz TANNENBERGER – who is found under this name in the German Stage-Yearbook – performed in the 1934/35 season as Baron Kolomán Zsupán in Emmerich Kálmán’s operetta Gräfin Mariza in the Salzburg City Theater (which was renamed the Salzburg State Theater by the Nazi regime). He played engagements on Austrian and foreign stages, including German ones under Nazi rule after 1933. In order to act in Nazi Germany he had to become a member of the stage section of the Reich’s Theater Chamber – which required »Aryan ancestry« for membership. So at first Fritz TANNENBERGER had no problems in this regard under the Nazi – until his engagement as singer and actor in the Salzburg State Theater. Starting on December 12, 1939 he was registered in the »Gauhaupstadt« [district capital] Salzburg, lodging first at the Hotel Bristol next door to the theater on the Makartplatz and finally in the Hotel Mödlhammer at 26 Getreidegasse.

In the 1939/40 season Fritz TANNENBERGER debuted as August Fliederbusch in Carl Michael Ziehrer’s operetta Die Landstreicher [the tramp] (directed by Paul Olmühl) at the Salzburg State Theater. According to the September 6, 1940 edition of the Salzburger Volksblatt TANNENBERGER was engaged for the 1940/41 season as member of the opera and operetta ensemble at the Salzburg State Theater by artistic superintendent Dr. Herbert Furreg. TANNENBERGER played the valet Josef in the popular Johann Strauß Jr. operetta Wiener Blut (directed by Paul Olmühl) and the squire Slender in Otto Nicolai’s opera version of Shakespeare’s The Merry Wives of Windsor (directed by Anna Bahr-Mildenburg) – the program and theater notes failed to identify the Jewish librettists for the two operas, Victor Léon & Leo Stein for Wiener Blut and Salomon Hermann Mosenthal for The Merry Wives of Windsor.

Yearbooks, programs, and press reports indicate that Fritz TANNENBERGER continued to be a member of the State Theater troop in later seasons under the artistic superintendents Dr. Erwin Kerber and Peter Stanchina, performing mostly as a singer: for example as Ottokar, son of the governess Mirabella, in the Strauß operetta Der Zigeunerbaron [the Gypsy Baron] (directed by Max Brückner); as Egon von Wildenhagen in Eduard Künneke’s operetta Der Vetter aus Dingsda [The Cousin from Nowhere] (directed by Max Brückner); and as Knöpfel in Nestroy’s farce Das Mädel aus der Vorstadt [The Girl From the Suburb] (staging by the comedy players) which premiered on January 26, 1944.

In March 1940 the Vienna branch of the »Reich Office for Genealogical Research« concluded that Friedrich Josef TANNENBERGER had Jewish ancestors (his maternal great-grandmother was Jewish). In May 1941 the Nazi district leadership in Salzburg declared that the actor from Vienna was politically unreliable because he was a »Judenstämmling« [descendant of Jews]. The district personnal office director expressed a slanderous insinuation: »There is no evidence, but a … [heightened suspicion] is called for« – that is an additional stigmatizing of the actor with a Jewish great-grandmotheras all in all: a suspicious, hostile and unpopular person. Despite this Fritz TANNENBERGER continued to be a member of the State Theater troupe. In January 1942 the Reich’s Chancellery in Berlin certified that he was a »person of German blood« according to the Nuremberg racial laws. At the time he was still a member of the stage section of the Reich’s Theater Chamber (German Stage-Yearbook 1942).

Someone must have slandered and denounced Fritz TANNENBERGER as he fell into the clutches of the Salzburg Gestapo. A surviving file from the prosecutors office from 1943 shows that the actor was charged with »treachery« in violation of the 1934 »law against treacherous attacks on the state and party« that had criminalized critical statements. But there is no indication of any prosecution of TANNENBERGER in the »Special Court« so it seems that the evidence was lacking or that the charge was completely without foundaton.

But the stigmatized actor remained a suspicious person under the Nazi regime, otherwise he would not have been arrested by the Gestapo in violation of all procedural rights and without a court warrant – presumably after the attempted assassination Adolf Hitler in July 1944. TANNENBERGER is one of an unknown number of victims who have remained undetected until now because of the lack of police, justice, and victim care records relating to them. But after seven decades a few have now been found through a search of the police registration files and identified thanks to witnesses.

The witness Claude Testard, who had been born in 1926, was a Frenchman from Paris. As an 18 year old he had worked as a valet in Salzburg since May 23, 1944, first in the Hotel Hirschen, and after October 4, 1944 in the Sternbräu inn (as is documented in the police registration files). His memoir reports that when the Gestapo rounded up suspicious and unpopular persons after the attempted assassination of Hitler, he was imprisoned in the jail on the Rudolfsplatz (under the Nazi regime it was nameded the Georg von Schönerer-Platz after the 19th century’s leading Austrian advocate of pan-Germanism and Antisemitism). His arrest, like that of those he identified, is not noted in the police registration files. But the report written by the Frenchman Claude Testard later is thoroughly credible despite a few errors in remembering some names:

[…] until then we had no Germans in our cell, either they were elsewhere or their were no »criminals« among them.
A few weeks earlier, on July 20, 1944, the assassination attempt against Hitler by Chief of Staff Colonel [Claus Schenk Graf von] failed. After this attack the repressive apparatus of the Nazis went into operation with unprecedented zeal. Arrests followed denunciations, often stemming from personal grievances with opponents. The jails filled up. Suddenly a whole bunch of Germans and Austrians joined us who had resisted the regime or just because they were charged with making »defeatist utterances« like saying »the war is lost, we are done for!« Most of them had been denounced by friends, family members, or Gestapo spies.

What a splendid people! People the Germans like to identify as celebrities, well known figures from politics, culture and the arts. In our cell alone we hosted

• an editor of the local newspaper [not identified so far]

• the actor Fritz Tannenberger, who I had recently seen in a film, and who was very flattered to be recognized by so many of us.

• then owner of the largest ready-made clothing shop in the city, Herr Mühlberger [seemingly an error]

• a young pastor named Schitter from Mariapfarr [curate Josef Schitter, Dachau concentration camp prisoner from 10/21/1944 to 4/10/1945]. He was denounced by his best childhood friend because of his views! I enjoyed his sympathy and he shared with me some of what his parish priest sent him to supplement our meager rations: white bread and a piece of bacon, which he cut into thin slices.

• the director of the State Bank, Herr Dr. Prettner [so far unidentified, possibly atorney Stojan Marian Pretnar]
and a few more. Now we were really fully occupied as we were now 30 to 35 prisoners …

This shows that there are major research gaps in the Nazi terror between July 20, 1944 and the liberation of Salzburg on May 4, 1945 that are hard to close because of the lack of police, justice and victims care records. But it is clear that Fritz TANNENBERGER, singer at the State Theater, was imprisoned in Salzburg’s police jail in July 1944 and that after his Gestapo imprisonment he died in the Salzburg State hospital on October 25, 1944 at the age of 47– officially from diphtheria, but very likely from the conditions he endured in the police jail. 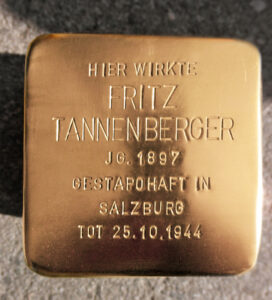 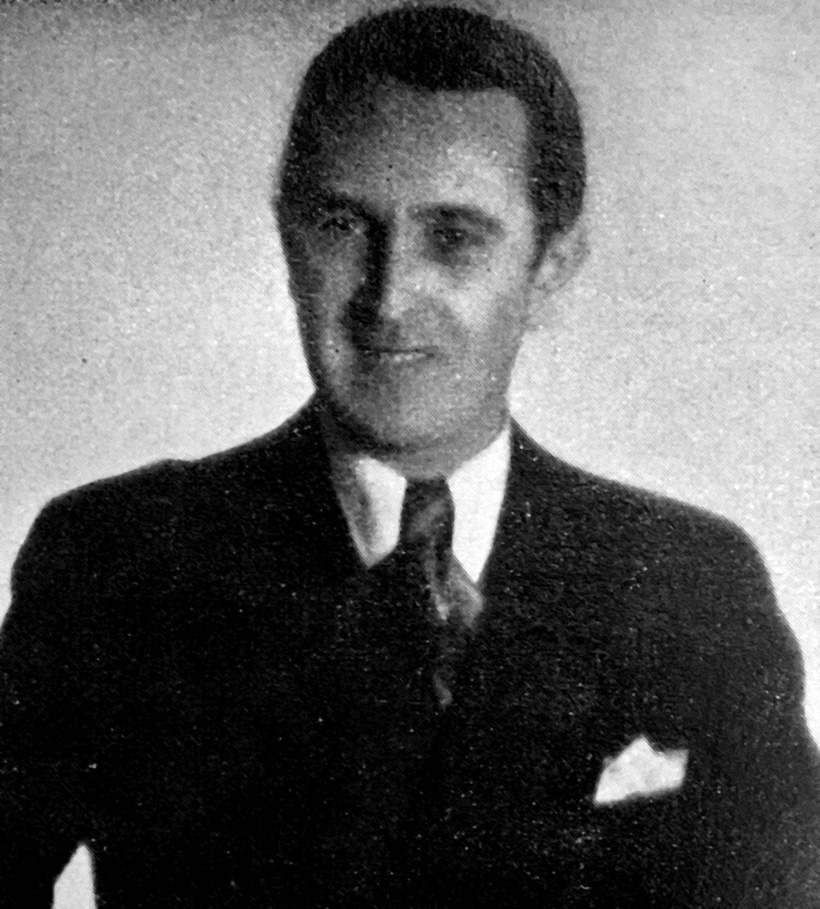 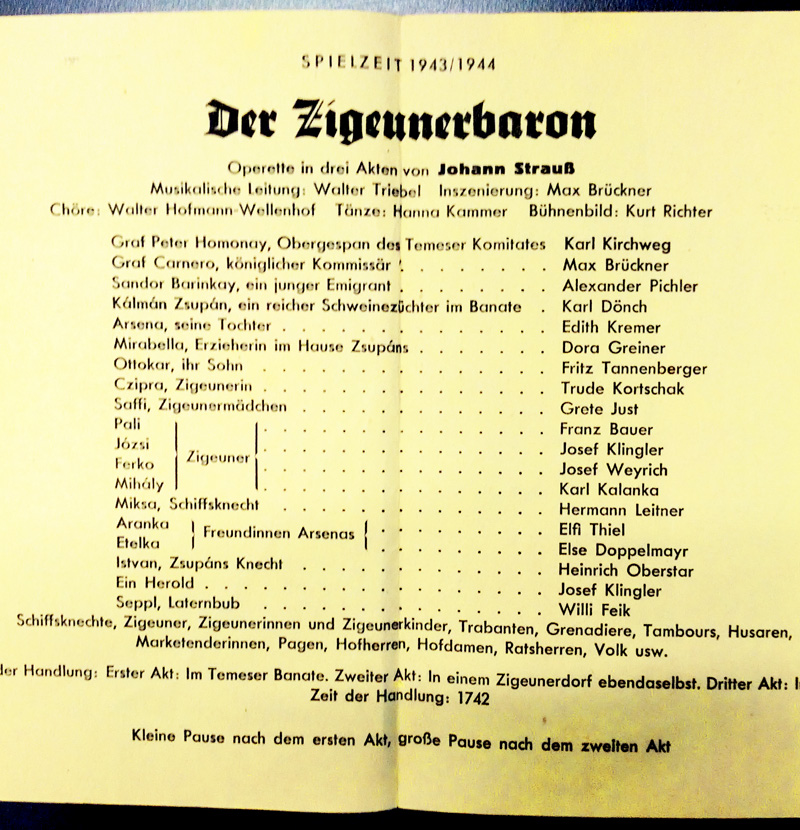 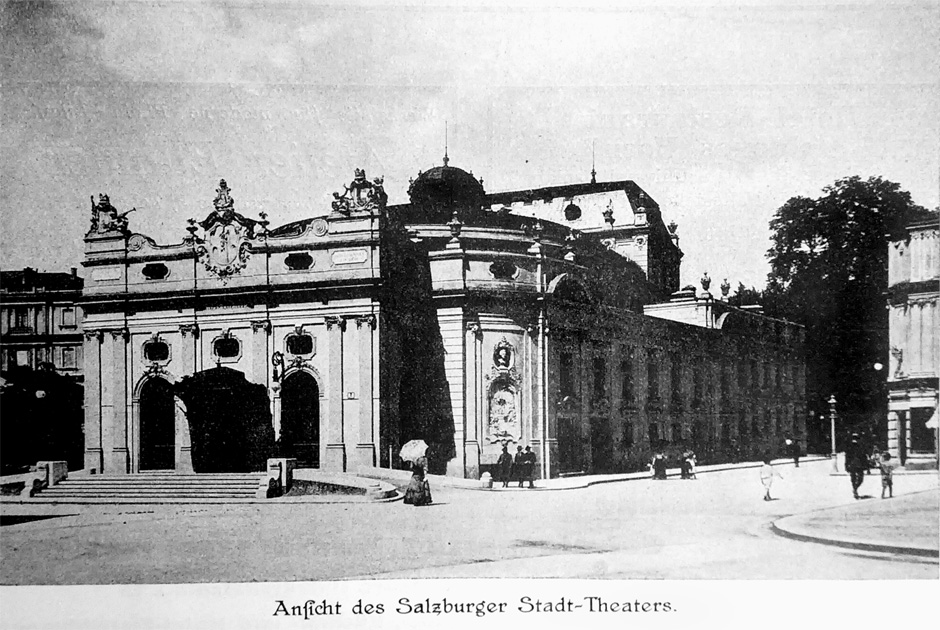 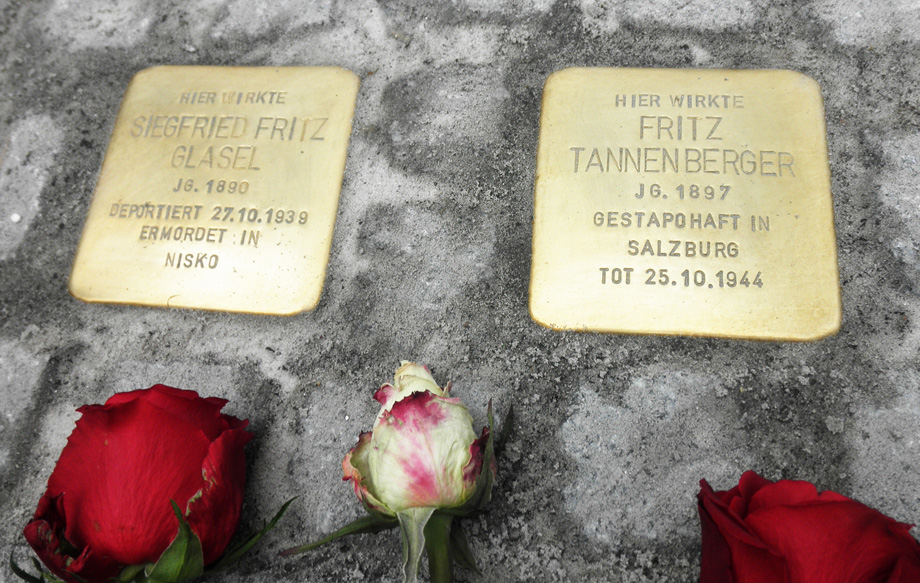 All stumbling stones at Makartplatz 2