Hermann »Harri« RUBENKES was born in Vienna on July 10, 1901. He was the son of David and Berta RUBENKES, a Jewish couple who had moved to Vienna from the Austro-Hungarian province of Galicia (now divided between Poland and Ukraine). He was a locksmith and machinist who had worked in Germany since the 1920s, but as a Jew he had been expelled by the Nazis to Austria in September 1934. He lived in Salzburg after that but was unable to secure a fixed position and had to get by with odd jobs in Jewish homes and the three shillings a day he got for distributing promotional leaflets. He wasn’t eligible for any government aid because he hadn’t been working in Austria.

Hermann RUBENKES was one of the unemployed workers who participated in the Communist resistance against Austro-Fascism from 1934-1938. His comrades called him »Harri«, which was his cover name in the illegal underground. The political agitation of the Communists in Salzburg’s »unemployed soup kitchen«1 at 8 Glockengasse attracted police attention at the beginning of 1938 and ten provincial leaders of the banned Communist Party (CPA) were arrested. A February 20, 1938 report of the federal police headquarters in Salzburg listed Hermann RUBENKES among the ten — and included the notation »mos« (Mosaic persuasion) in his personal data which marked him as Jewish and the only Jew known to have been persecuted on political grounds in Salzburg.2

RUBENKES was released under the Austrian amnesty for political prisoners in February 1938 and lived as a subtenant at 14 Werkstättenstraße in the Itzling district of Salzburg. In his police registration he reported he had no religion — either on the assumption that it would help him to avoid further persecution or on the grounds that as a Communist he had no religion. He was still an official member of the Vienna Israelitischen Kultusgemeinde (Jewish Religious Society), but that may have been an indication of ethnic identification rather than religion. In any case this didn’t hide his Jewishness as that was noted in his police and judicial files. Although he was officially known as a Jew and a Communist, and his freedom didn’t last long, he wasn’t convicted for being a Communist. The first deportee from Salzburg’s organized resistance to the Nazi regime was deported because he was a Jew.

Hermann RUBENKES was arrested on June 20, 1938 and he was transferred from the police jail in Salzburg to the Dachau concentration camp on June 25th. There he was registered as a Jew and »AZR«-Prisoner3 Number 17129. He was moved to the Buchenwald concentration camp on December 11, 1940 and registered as Prisoner Number 5514. There is a false certification of his death in the Buchenwald concentration camp on March 25, 1942, but the 40 year old Hermann RUBENKES was actually one of the prisoners designated for »Sonderbehandlung 14f13«4 who were gassed in the killing center of Bernburg on the Saale on March 12, 1942.

The urn with the ashes of the murdered Jew was shipped to Vienna and the Vienna Israelitischen Kultusgemeinde was charged for the shipping costs. According to the cemetery records the ashes were interred in the Jewish section of the Vienna Central Cemetery (IV/18a/21/29) on July 14, 1942 »ohne Partei«, that is in the absence of mourners. Nearby was the grave of Hermann RUBENKES’ mother Berta (Scheindl Rebekka), who had died in 1920. Because of the lack of data, the fates of his other relatives are unclear. In any case there is no record available of any victim support for survivors or dependents. Next to the name Hermann RUBENKES in the Shoah Databank is the remark »last known home address Salzburg.«

4 »Sonderbehandlung 14f13«: Special treatment, »14« = Concentration Camp Inspector, »f« = Fatal, »13« = gassing in a killing center of the »T-4« organization [the »euthanasia« program for murdering the handicapped which was headquartered at Tiergarten 4 in Berlin] 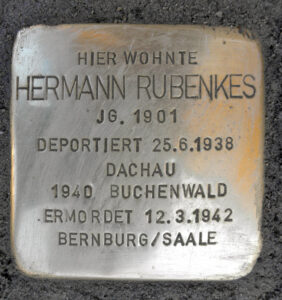 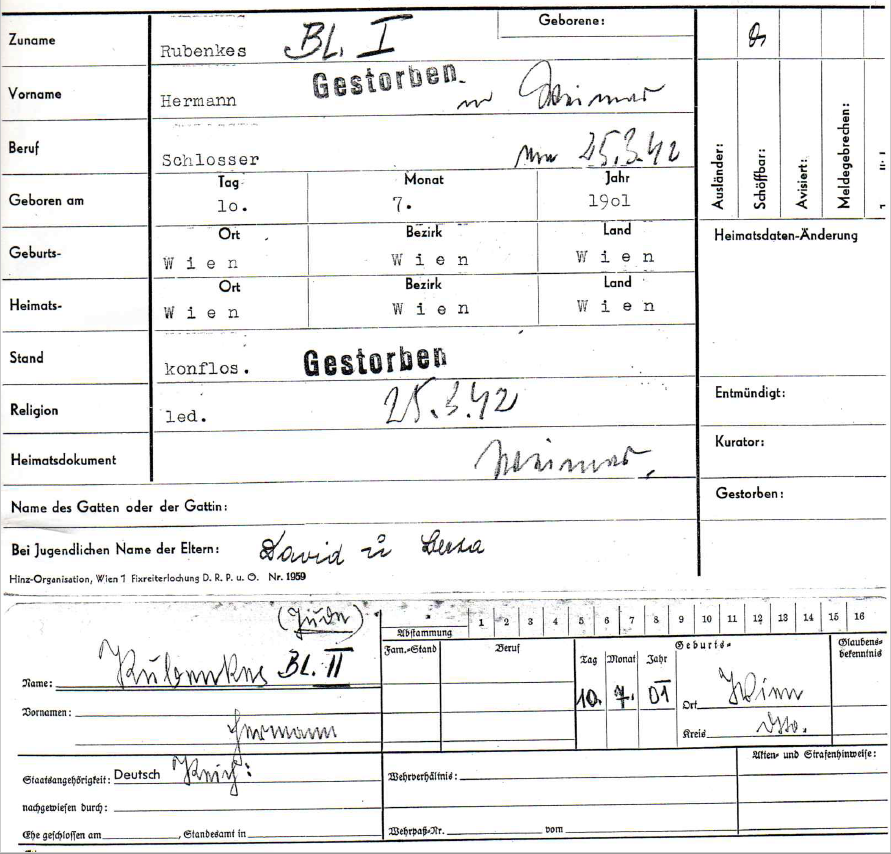 All stumbling stones at Werkstättenstraße 14