Johann GORUP was born in Pernau bei Wels (in Upper Austria) on June 19, 1896. He was an unmarried clerk and a Roman Catholic. He and his older partner Anton VITEK had lived at 3 Brodgasse in Salzburg since 1936.

The couple were arrested under the Nazi regime, presumably because of a denunciation, and were sentenced by the Salzburg Provincial Court on May 15, 1941 to two years »harsh imprisonment« because of their sexual orientation [according to § 129 I b of the Austrian Penal Code, which remained in force under the Nazis, homosexuals of both sexes were subject to up to five years of »harsh imprisonment«].1

The 49 year old Johann GORUP served his sentence in the Amberg prison in Bavaria and according to the police registration files in Salzburg he died there on March 8, 1943.

His partner Anton VITEK was an unskilled laborer. Unlike Johann GORUP he didn’t serve his entire sentence in prison, but was transferred to the Dachau concentration camp where he was registered as a »PSV« (a so-called »protective custody« prisoner marked by a green triangle) prisoner number 30891 on July 4, 1942. On February 15, 1945 he was re-categorized in Dachau as a § 175 (of the German penal code) prisoner, that is as a homosexual marked by a pink triangle.

Anton VITEK survived his concentration camp imprisonment and was freed by US troops on April 29, 1945, but he didn’t return to Salzburg and it isn’t known if he long survived the consequences of his mistreatment in Dachau. We do know that the liberated Austria of the Second Republic refused to grant homosexuals any recognition as victims of Nazi terror.

1 Under the Nazi regime the Salzburg Provincial Court condemned 338 people, including six women, of violating § 129 I b – »unnatural sexual activity with a person of the same sex« –of the Austrian Penal Code which was still enforced. The case files have since been destroyed. 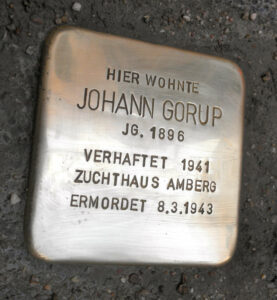 All stumbling stones at Brodgasse 3