Olga SACHSEL, maiden name Lichtenstein, was born in Mittel-Altenbuch in the Trautenau district of Bohemia (then part of Austria-Hungary it is now Staré Buky in the Trutnov district of the Czech Republic), on July 27, 1876. She was the second of three children of the Jewish couple Camilla Oesterreicher and Dr. Moriz Lichtenstein. Dr. Lichtenstein was a Hof- und Gerichtsadvokat (attorney) at number 4 Hoher Markt in Vienna’s First District. Both parents were buried in the Jewish section of the Vienna Central Cemetery.

Olga married the physician Dr. Maximilian Sachsel in the Vienna City Temple in 1908. Sachsel had been born on November 15, 1870 in Neubidschow (Novy Bydzov) in Bohemia and had studied medicine in Vienna. Their son Eduard was born in Vienna on April 7, 1909. Later the family lived in the Prague suburb of Karolinenthal (Praha-Karlin) where Dr. Sachsel had his medical practice. He died in Prague in March 1935. His death notice in the New Free Press reported that his son Eduard had already been awarded a PhD in geology. He had studied with the renowned geologist Dr. Franz Eduard Suess at the University of Vienna and had published in his field (Austrian Journal of Earth Sciences).

Olga Sachsel had long been active as a writer, composing prose and lyrics and she dedicated her memoirs to her recently departed husband: Dein Gedenk ich (Prag 1935). Like many other educated Jews she was attracted to the sophisticated Salzburg Festival and its creative spirit Max Reinhardt of Schloss Leopoldskron, so even before her husband died she had bought a town house at 24 Linzer Gasse in Salzburg in August 1932. The Salzburger by choice Olga Sachsel was only able to enjoy her domicile until the terror year of 1938.

Although the building at 24 Linzer Gasse was categorized as Jewish property by the Nazis, for some unknown reason it was never confiscated. It was however severely damaged by the bombing of Salzburg in November 1944. By that time its owner had already been dead for a year and a half. The widow Olga Sachsel (who had lived at 12 Riegrova in Prague before she was registered in what seems to have been a »collective house« for Jews at 12 Erbenova in the Smichov district) was deported to the Theresienstadt concentration camp together with her brother-in-law Emil Sachsel and his wife Jeannie, née Lichtenstein on July 20, 1942 – in Transport Aas. On October 22, 1942 the three of them were shipped off in Transport Bx to the Treblinka death camp and Olga was murdered there on April 22, 1943 at age 66.

Her son Dr. Eduard Sachsel and his wife Grete (neé Löwy), who were also last registered at 12 Erbenova in Smichov, 12, were deported to Theresienstadt on August 10, 1942. The 33 year old Eduard died from his mistreatment seven days later on August 17, 1942. On October 15, 1942 Olga, who had been forced to endure the death of her son in Theresienstadt, changed her will shortly before her deportation to Treblinka and named her imprisoned daughter-in-law Grete as her heir.

Imprisoned in a concentration camp, Olga Sachsel was unaware of the fate of her two brothers. We now know that Dr. Georg Lichtenstein, the older brother who had taken over the law practice of their deceased father in Vienna, died in Cuba in 1942 and was buried in the Jewish cemetery near Havana at Guanabacoa. Her younger brother, the pharmacist Rudolf Lichtenstein, was deported from Vienna to Izbica near Lublin on May 15 1942 and was murdered in Belzec, Sobibor, or Majdanek.

Only Olga Sachsel’s daughter-in-law Grete survived the concentration camp ordeal. She emigrated to Israel. Nothing is known in this country about the property in Prague that she inherited from her mother-in-law. The house in Salzburg that had been badly damaged but was never confiscated by the Nazis didn’t need to be returned but the judicial recognition of the Israeli citizen as heir took a long time. Shortly after the official registration of her ownership in the Salzburg records in 1955, Grete Mahler (no longer Sachsel as she had remarried) sold the house at 24 Linzer Gasse.1 Grete Mahler died in Israel in 1992.

So far the works of the translator and author Olga Sachsel (mostly published under the double name SACHSEL-LICHTENSTEIN) remain shrouded in historical darkness in this country – a result of the Shoah, of indifference, of the desire not to know, and persistent clinging to national thought cages. In addition, a critical assessment of her literary work still awaits because neither her books brought out by German publishers before 1933 nor the later ones from Prague are to be found in any Austrian library: Spanische Novellen (1918), Neue spanische Novellen (1921), Stille Helden: Roman aus dem neuen Wien (1926), Blätter im Winde: Gedichte (1929), Heimweh (1931), Die Spieluhr und andere Stimmungsbilder aus meinem Leben (1931), Dein Gedenk ich: Ein Buch der Erinnerung (dedicated to her late husband in 1935) and Wandervögel: Drei Frauenschicksale (1938).2

Thanks to the initiative of Reinhold Ritts from the University of Salzburg library we’ve been able to get a copy of her 1931 collection of short stories Die Spieluhr (The Music Box).3 This includes the story of a meeting between the Vienna lawyer Dr. Moriz Lichtenstein with a childhood friend who made a career in Viennese politics: the Christian Social mayor Dr. Karl Lueger who made a career based on political Antisemitism that won Adolf Hitler’s »undisguised admiration«. In Olga SACHSEL-LICHTENSTEIN’s telling Karl Lueger jovially parries his childhood Jewish friend’s accusations: »No no, don’t be upset; privately I quite like the Jews, there are magnificent people among them, but in public I consider them dangerous …«. In 1941/42 a propaganda film called Vienna 1910 was produced about the last days of Hitler’s precursor Karl Lueger that was designed to justify the racial extermination politics of the Nazi regime.

1 Owners of the property at 24 Linzer Gasse: 1902 Anton and Maria Schein, 1932 Olga Sachsel, 1955 Grete Mahler (Sachsel’s name after she remarried), sold (Property Register of the inner city of Salzburg, EZ 489) 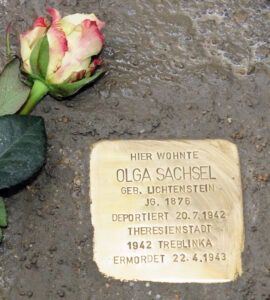 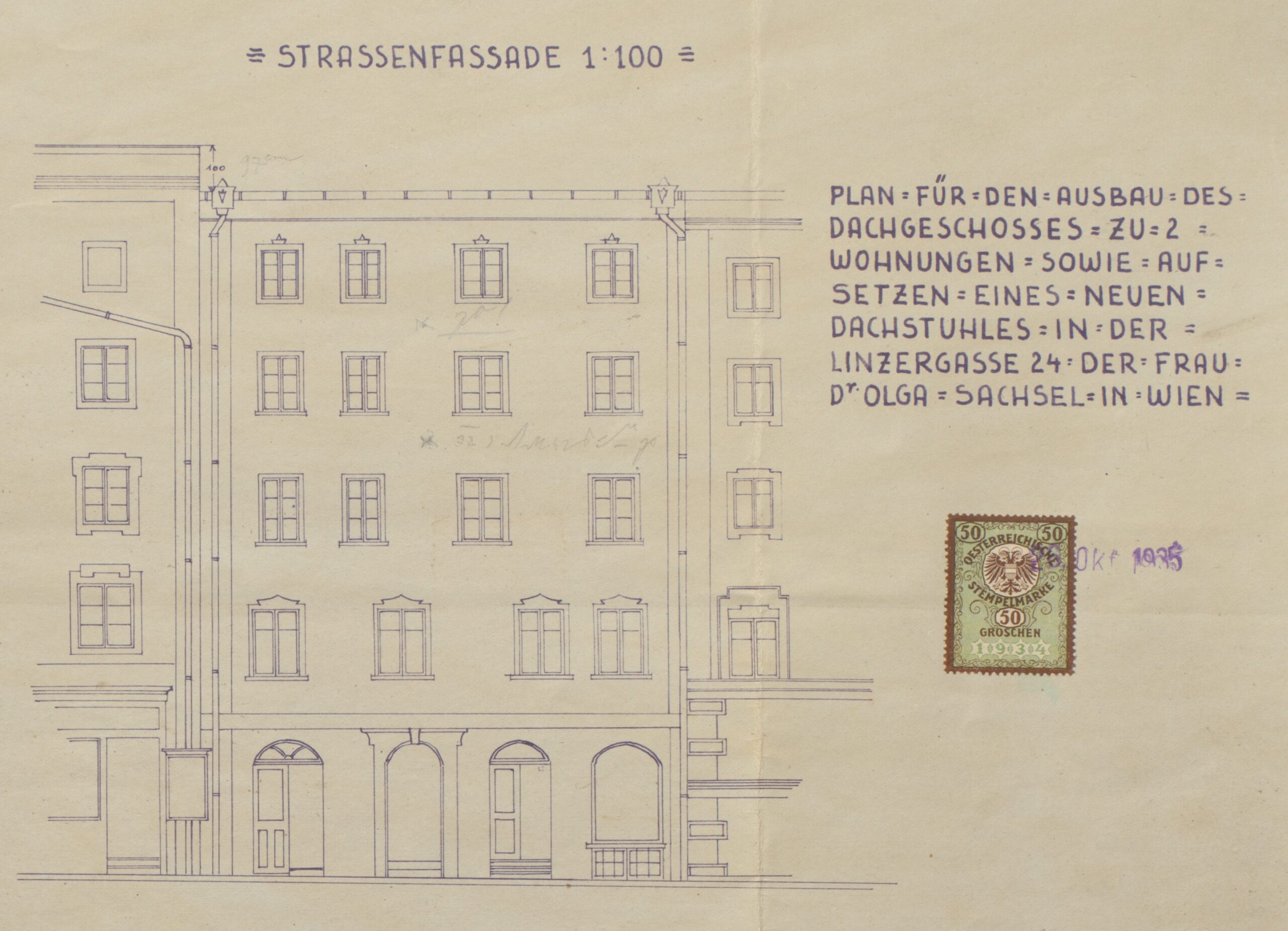 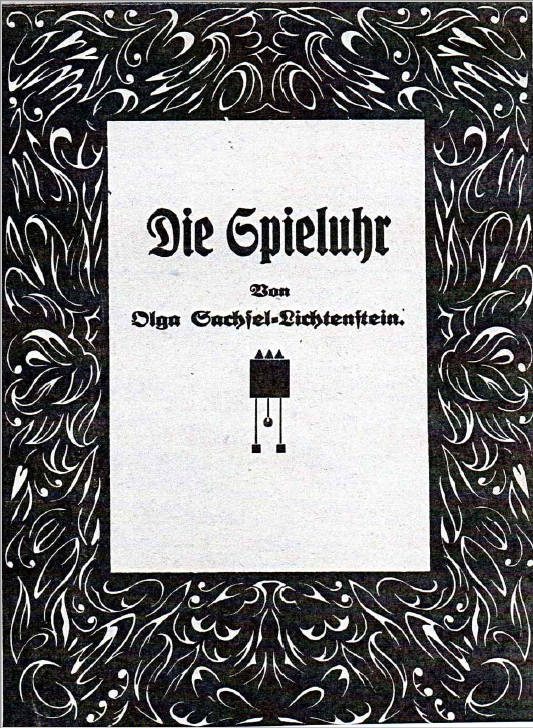 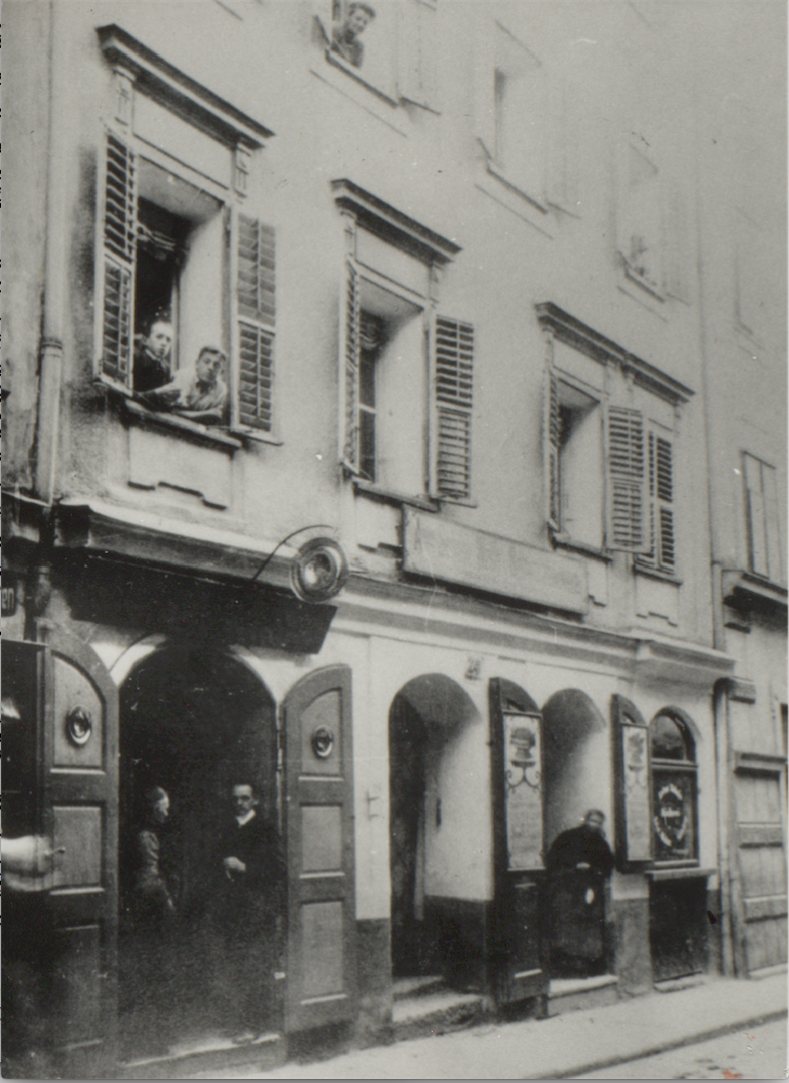 All stumbling stones at Linzer Gasse 24